The startling greater truth behind Deese’s remarks must be accentuated. Deese does not identify with fellow American citizens or pledge his allegiance to the country in which he was born. Deese has other loyalties, and they have defined his life from his earliest days. 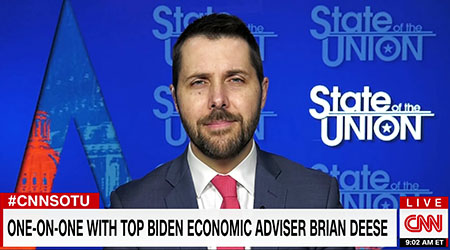 Deese’s entire pedigree confirms what WorldTribune has reported continuously for years. The progressive ruling establishment is a cozy nexus populated by major corporate, private equity, concentrated-wealth “philanthropic,” NGO, media, academic and think tank forces all relentlessly devoted to the cause of one-world globalism. This network fully controls the Biden administration, just as it controlled its predecessor, the two-term presidency of Barack Obama.

Brian Deese can be directly tied into all of the major spokes of this nation-destroying hydra.

WorldTribune wrote of Deese in 2020:

It should be further noted that Brian Deese, a former senior aide to Barack Obama who now works at global investment goliath BlackRock, has been widely reported to be one of Joe Biden’s key advisers on climate change. Deese is a former research associate at the Center for Global Development who has now risen to the top levers of corporate and Democratic Party power.

Glenn Beck, then of Fox News, ably described Deese as far back in 2009 when the totally unqualified 31-year-old was tabbed to head up Obama’s General Motors Auto Task Force:

Despite having no formal business education, no business experience and no auto industry experience, 31-year-old Brian Deese is now in charge of dismantling General Motors.

So what does this guy’s resume look like? It should be impressive, considering he’s managing America’s $458,000 per day involuntary investment.

Deese grew up in a Boston suburb, the son of a political science professor at Boston College. He moved to Vermont and attended Middlebury College, where he studied political science and also took time to host a campus radio show called “Bedknobs and Beatniks,” described in one write-up as “a format of music, news, discussion and banter.”

He graduated college in 2000 and then it was onto a pair of non-profit think tanks: the Center for Global Development and the Center for American Progress.

Eventually Deese went to Yale for a law degree, but a few credits short of graduating, he went “on leave” to work on Senator Hillary Clinton’s presidential campaign, quickly becoming her top economic policy staffer.

Deese checks all the boxes for the kind of person selected for advancement by our would-be ruling elites. Son of a major university professor, graduate of a privileged college, weaned by establishment Swamp think tanks, and then off to Yale Law for finishing school. This is how kleptocracies operate.

Deese joined the Center for Global Development straight out of college. The staunchly globalist think tank is heavily funded by the usual suspects: Bill Gates, George Soros, the Ford Foundation, the Rockefeller Foundation and the World Bank.

The Center has received more than $40 million in ongoing active funding from the Bill & Melinda Gates Foundation and a crisp $1 million from the Rockefeller Foundation.

Deese eventually moved on to the Center for American Progress, a Hillary Clinton-aligned Democrat establishment think tank founded by John Podesta and also funded by George Soros and a slew of major corporations. Comcast NBCUniversal, parent company of ruling establishment propaganda organ NBC News, is among CAP’s funders as well.

In between his Obama and Biden White House stints, Deese parachuted into a lucrative position with private equity behemoth BlackRock, serving as Global Head of Sustainable Investing there from October 2017 to December 2020.

It’s no coincidence that the man who now says Americans must accept pain at the pump today focused on climate change at BlackRock, just as he did at the Obama administration.

Deese’s use of the phrase “liberal world order” is not a slip of the tongue, a case of a White House staffer carelessly letting the cat out of the bag. On the contrary, the Biden administration is tasked with the deeply unpopular job of normalizing the planned subjugation of the once-sovereign United States into a greater international governing body.

Examples of this abound, and they are all very public. In the course of the past year, Secretary of State Antony Blinken, who has deep-rooted and intimate family ties to George Soros, has invited the United Nations to set up a racial truth commission on U.S. soil and appointed a European-styled “Special Representative for Racial Equity and Justice” at State.

Biden, whose every word and gesture is strictly choreographed, has himself frequently hummed the buzz-phrase “rules-based international order” to describe the “liberal world order” Deese was referring to.

Is that the same as the Rules Based International Order? 🤔 pic.twitter.com/07SmoVy5PN

In February 2021, Biden personally pledged U.S. fealty to this “order” at the ultra-elitist Munich Security Conference.

The adherents of this order explicitly see the citizens of sovereign nations as impediments to their designs.

Christoph Heusgen, who served as a key foreign policy advisor to Chancellor Angela Merkel and German Ambassador to the United Nations, is the chairman of the Munich Security Conference.

As WorldTribune documented in Dec. 2021:

From the 11:18 mark of the Belgrade Security Forum discussion:

Heusgen has further identified populist citizens as obstacles that needed to be overcome:

He has come out and said that national sovereignty must give way to the international order. From a 2020 article in PassBlue, a news outlet that covers the United Nations:

“There’s no doubt that the UN — multilateralism in general — is at a critical juncture,” Christoph Heusgen, German ambassador to the UN, told PassBlue. “There are developments around the world where countries don’t put multilateralism at the top of their agenda, and you have more populism and nationalism. I think it’s the task of countries like France and Germany, which in history went through these periods and witnessed what that can lead to, to remind fellow members of the Security Council of the need to lead the multilateral approach to success.”

What too many Americans do not understand, or perhaps do not wish to understand, is that major corporations and private equity titans are complicit in this grotesque betrayal of Western civilization. Like Christoph Huesgen and Brian Deese, their loyalties are manifestly NOT with their fellow countrymen.

Smith has a staunch ideological attachment to the post-World War II neoliberal order, which he specifically saluted upon receiving the arch-globalist Atlantic Council’s Distinguished Business Leadership Award in 2019. In his acceptance speech, Smith hailed “the ambitions of President [Franklin Delano] Roosevelt and Secretary of State Cordell Hull, who began the march towards open markets with the Reciprocal Trade Agreements Act of 1934.”

“Following World War II, the U.S. worked hard to develop rules-based institutions such as the IMF… the World Bank and the General Agreement on Tariffs and Trade, which became the World Trade Organization in 1995,” he continued. “Without question, such institutions fed the growth of global prosperity in the latter half of the 20th century.”

Private equity multi-billionaire Glenn Hutchins is even more upfront about it: he feels NOTHING for his fellow Americans and instead considers himself a citizen of a larger entity:

In a 2011 article in The Atlantic chronicling the “rise of the global elite,” Chrystia Freeland devastatingly quoted Hutchins articulating his worldview. From the article:

“A person in Africa who runs a big African bank and went to Harvard might have more in common with me than he does with his neighbors, and I could well share more overlapping concerns and experiences with him than with my neighbors.” The circles we move in, Hutchins explains, are defined by “interests” and “activities” rather than “geography”: “Beijing has a lot in common with New York, London, or Mumbai. You see the same people, you eat in the same restaurants, you stay in the same hotels. But most important, we are engaged as global citizens in crosscutting commercial, political, and social matters of common concern. We are much less place-based than we used to be.”

As we noted at the time, in July 2020 Hutchins was serving on the Board of Directors of the Center for American Progress, one of the two think tanks that helped propel Brian Deese into his cartel career.

If the American people are to truly fight back against the globalist forces seeking to destroy the independence of this nation from within, it is critical that they fully understand the vast array of powerful forces united against them. Carefully examining the background of new world order apparatchiks such as Brian Deese is a good place to start.