They cry about all the money they are losing due to the coronavirus pandemic yet the major U.S. airlines have had plenty of cash to spend over the years funding the socially destructive programs and globalist organizations that created the very conditions that have helped make the Chinese virus a worldwide threat to human health.

After the big banks, which have been far and away the worst offenders, the airlines appear upon quick reflection to be the second-most common business group to pop up while researching woke industry for the Corporate Watch column. Most well-known brands have been represented but we will focus here for the most part on Southwest Airlines, not only because of its all-too-frequent mentions but also as an example for just how much “philanthropic” damage one large U.S. airline can inflict upon our nation. 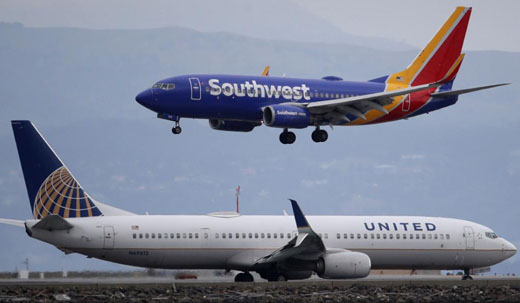 Southwest is a major sponsor of a pro-illegal immigration, pro-refugee organization known as OCA-Asian Pacific American Advocates. “Our priority: to push Congress to address the massive backlog of family visa applications, of which 1.8 million are from Asian and Pacific Island countries,” the group states on its website. “OCA works to prevent any legislation that strips the humanity of undocumented immigrants through criminalization or the implementation of unfair hurdles in their pathway to citizenship,” the organization further asserts.

Right below this brazen language can be found the familiar Southwest logo and the declaration that “Southwest Airlines is proud to be the official airline of OCA.”

OCA was known at its founding in 1973 as the Organization of Chinese Americans. So it should be no surprise that the group was quick to downplay the Coronavirus threat and condemn “racist” attempts to raise health concerns specifically related to China last month before the virus turned into a full-blown global and American crisis.

“OCA condemns unwarranted discrimination towards ethnic Chinese and other Asian Americans due to harmful stereotyping and misinformation about coronavirus,” the group stressed in a Feb. 3 release. “For people outside of China, the risk of exposure to coronavirus is currently very low, while the seasonal flu poses more immediate threats and a higher mortality rate,” OCA continued. “The notion that Chinese and other immigrants are contagious is racist and extremely harmful, resulting in discrimination against Asian American-owned businesses and Asian Americans in all aspects of life. Asian Americans are once again being targeted as aliens, deemed perpetual foreigners, and wrongly accused as public health threats.”

Southwest also financially supports Asian Americans Advancing Justice, another radical pro-immigration organization that specifically seeks to boost Asian immigration into the U.S. Progressive globalist billionaire George Soros’s Open Society Foundations was a major contributor in 2017 to a $1-million+ “New Americans Campaign” umbrella-group pledge to AAAJ. Asian Americans Advancing Justice authored a 2015 article on Medium.com titled “Community Partners Inform Priorities for Immigrant Integration.” The article reports on a special meeting of “community partners” with AAAJ to promote “immigrant integration.” At the end of the article, the group issues a “special thank you to State Farm and Southwest Airlines for sponsoring this event.”

In February, AAAJ, like OCA, was more concerned with spouting off against “xenophobia” as the Chinese Virus made its way toward America. “No amount of fear can excuse prejudice and discrimination against Asian Americans,” the organization said in a Feb. 19 press release. “Throughout history, Asian Americans have been wrongly targeted due to mass hysteria, from the use of the racist term ‘Yellow Peril’ to refer to East Asians as a danger to Western civilization to the incarceration of 120,000 Japanese Americans during WWII.”

Southwest is also listed as the “official airline” of the pro-illegal alien Congressional Hispanic Caucus Institute’s Leadership Programs. Under a section on its website listed “Our Highest Honors,” CHCI reveals that it gave former Rep. Luis Gutierrez its “CHCI Legacy Award” in 2018. Gutierrez was one of the most extreme open-borders advocates in congressional history before suddenly announcing his retirement in 2017.

As we reported last month, Southwest is also a corporate supporter of the Latino Community Foundation of Colorado’s efforts to amnesty millions more illegal aliens in the Rocky Mountain State and the rest of America.

When not doing all it can to promote the Third World invasion of the United States, Southwest also backs organizations that support abortion and the warping of children via the toxic “transgender youth rights” agenda. In keeping with its favorite tag line, Southwest touts itself as “the official airline of Chicago Foundation for Women.” CFW has directly funded and actively worked side-by-side with Planned Parenthood to promote abortion rights in Illinois. “On June 12, Governor [J.B.] Pritzker signed the Reproductive Health Act, which ensures Illinois remains a safe haven for reproductive choice in the Midwest, where abortion care is treated as health care,” the group proudly boasts in a “Grantee News” posting on its website.

Southwest was one of four companies listed as “statewide sponsors” of a radical pro-homosexual rights group known as Equality California in 2014 when that organization spearheaded a major effort to protect a new law promoting trangenderism in the Golden State’s public school system.

The “School Success and Opportunity Act” was passed in 2013. “The bill required public schools in the state to allow transgender students to use bathrooms, and participate on sports teams, that match the gender they identify with,” Ballotpedia reported.

The following year, an effort was made to do away with the mandates on school sports and bathroom use. Among those strongly opposing the effort to change the pro-transgender kids law was Equality California. “Protecting this law is our number one priority, and we will put everything we’ve got into it,” the group’s executive director John O’Connor said at the time.

Here’s a quick look at some other major airlines who have been featured in Corporate Watch over the past several months:

Tatchell has called for the lowering of age of consent laws in Britain for homosexual youth. In a 1997 letter to the UK newspaper The Guardian, Tatchell shockingly defended academic studies that seek to challenge “the assumption that all sex involving children and adults is abusive.” Tatchell declared such “research” to be “courageous.”

AA is also a “platinum partner” to the powerful homosexual activist group Human Rights Campaign, which pushed a 9-year-old transgender child onto national television to be used as political prop in the Democratic presidential primary in October. HRC co-hosted a town hall with CNN in which the child asked Sen. Elizabeth Warren (D-MA), who was being hailed as the front-runner for the Dem nomination at the time, what she would do to support this grotesque abuse of innocent kids in our nation’s school system.

Delta Airlines is a corporate supporter for CARE, one of the biggest organizations helping to inundate the West with Third World refugees today.

JetBlue is a “corporate member” of Business for Social Responsibility, a George Soros-funded group that wrote a playbook for global companies to follow as they dedicate themselves to social activism. The guidelines were aimed to help corporations avoid losing customers as they pursue their radical policies.

U.S. airlines are asking for over $50 billion in financial aid from the federal government due to the Coronavirus crisis. Do the American people really want to give that kind of money to woke corporations that have used so much of their financial capital to grievously harm this nation socially and culturally over the years?