In previous articles on corporate support for the social forces that are destroying America today, one company’s name kept popping up again and again.

Bank of America has gone out of its way to assert itself as one of the most enthusiastic backers of “social change” to be found among the many monolithic corporations active in funding radical groups. 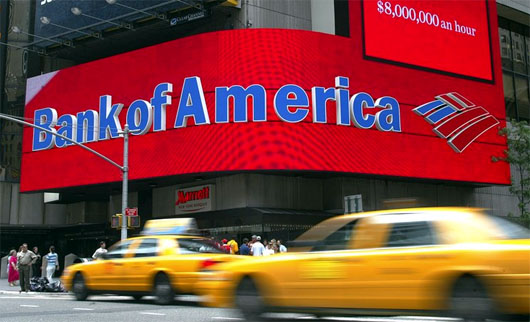 NEO Philanthropy is a “fiscal clearinghouse for left-of-center causes,” as the website Influence Watch puts it. On its own website, the organization prominently boasts that it “has strategically awarded more than $130 million to nearly 500 innovative organizations on the front lines of social change.”

Tom Johnson at the Capital Research Center reported in 2015 that NEO had received a whopping $12,522,100 in funding since 2001 from two George Soros outlets, the Open Society Institute and the Foundation to Promote Open Society.

According to Influence Watch, the Bank of America Charitable Foundation donated $50,000 to NEO in 2016. But this direct tie-in to a Soros-controlled organization only scratches the surface of Bank of America’s activities.

The Roberts Enterprise Development Fund, or REDF, is a committed advocate for refugees and illegal immigrants pouring into America. It hosts a “workshop” page on its website dedicated to helping Dreamers avoid deportation. Among helpful links included on the page are “What to do if immigration comes to your workplace” and “Here to Stay resources.”

Also on its website is an entire page extolling the close relationship the group has with Bank of America. The page notes that BoA has helped finance REDF since 2008, beginning with a hefty $250,000 grant. “According to Dannielle Campos, Senior Vice President and National Philanthropy Director at Bank of America’s Charitable Foundation, the company makes strategic investments at the intersection of ‘social impact investing and social enterprise,'” the article reads. REDF boasts that as its organization has grown, BoA has upped its support with a $500,000 grant.

Bank of America VP Campos is also a part of the Council on Foundations, serving as a member of its Environmental, Social and Governance group. BoA Charitable Foundation President Kerry Sullivan, meanwhile, is a member of the organization’s Corporate Committee.

A group called “Hispanics in Philanthropy” is another of the Council’s “global partners.” This organization takes an extremely hard line on what it calls the “atrocities” being committed against migrants on the U.S. southern border. HIP deplores Trump administration threats to “seal off the border,” cut off U.S. aid to Central America and enact tariffs against Mexico if that country doesn’t help stem the flow of migrants to the U.S. border. “Promoting immigrant rights is core to HIP’s DNA, and over the past 35 years, many of our programs have prioritized the needs of migrants and lifted up advocacy around policies that affect their lives,” the group states.

Beyond the strong link with two of its executives via the Council on Foundations, Bank of America is also a direct funder of Hispanics in Philanthropy. It is listed as a “Plata/Silver” donor for the group’s 2017 annual conference.

Bank of America has also funded another group heavily backed by George Soros. The Atlantic Council bills itself as a “think tank” dedicated to international affairs. Soros’s Open Society Foundations is listed as a donor to the organization under the $250,000-$499,000 category.

“Soros’ political and strategic philanthropy is an inspirational example of how one man’s vision and unflagging commitment to the open society ideal can change the lives of millions,” the Atlantic Council exclaims in a 2015 article on its website simply titled “Thank You, George!”

They have others to thank as well. If you scroll further down that donor list, Bank of America can be found under the $25,000-$49,000 category.

Bank of America is also a prominent donor to the League of United Latin American Citizens (LULAC), another radical advocate of massive immigration into the United States. A screed on its website slams the Trump administration for failing to enact immigration reform (read: amnesty), saying the president “fuels the xenophobia frenzy of those who clamor Latino immigrants and refugees are not welcome here.”

The rant goes on to say border security policies are “nothing more than the act of politicians with a closed-door mentality… [that] seek to appease those who want nothing more than to increase anti-immigrant law enforcement.”

Last but not least, there is Bank of America Board of Directors member Monica Lozano. A former chair of the board for the staunchly pro-illegal immigration National Council of La Raza, now known as Unidos, Lozano is listed as a “President’s Council” “Influencer” in the organization’s 2016 annual report. Her name is the first mentioned in the vast list of core supporters.

Of course, Bank of America is listed as a La Raza donor twice in the “Institutional Investors” section, under both its name and that of its charitable foundation.

In addition to serving on the board for Bank of America, Lozano is also a board of trustees member for the well-heeled globalist Rockefeller Foundation, which financially supports a long list of radical organizations.

Lozano was an appointee to former president Barack Obama’s Economic Recovery Advisory Board during his administration. While serving as the University of California system’s Board of Regents Chair in 2016, Lozano lavishly praised UC President Janet Napolitano, Obama’s former Homeland Security director, for creating a multi-million-dollar Undocumented Legal Services Center for the university system.

“From the earliest days of her presidency, Janet Napolitano has acted to ensure that our undocumented students are on equal footing with others seeking to fulfill their aspirations at UC campuses,” Lozano trilled.

“These efforts have made the University of California a leader among universities across the nation in ensuring academic opportunity for undocumented college students.”

As for Unidos, its president, Janet Murguía, is a longtime member of the Board of Directors for the Clinton Foundation. Her bio at the foundation’s website states that “[s]he also serves as a member of Diversity Advisory Councils for Bank of America” and other corporations.

It’s a tangled web indeed that Bank of America is weaving with its “social impact investing.” All of it appears to be aimed at unraveling the traditional social and cultural fabric of this once-cohesive nation.