“Like a good neighbor” is a hallmark of the State Farm advertising jingle. But the reality is far removed from the small-town community values embodied by such a slogan. The insurance goliath is in practice a corporation dedicated to advancing the social planks of globalism and progressivism that are destroying America as a nation.

Let’s start at the top and work our way down. Michael L. Tipsford is the Chairman, President and Chief Executive Officer of State Farm. He is also a member of the Board of Trustees at the globalist think tank the Brookings Institute . The board is co-chaired by private equity investor Glenn Hutchins, a close ally of the Clintons and a board member of the Obama Foundation , as we examined last week. 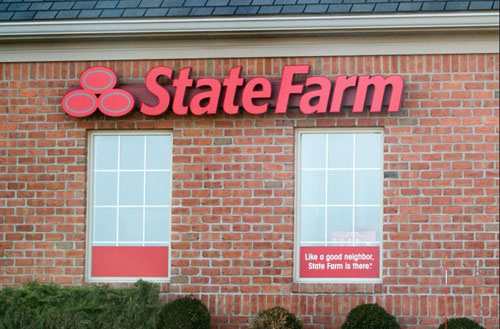 The Brookings Institute takes an ardent and consistent internationalist viewpoint, with its members opposing President Donald Trump’s wall to secure our porous southern border, decrying the scrapping of the North American Free Trade Agreement (NAFTA) and lobbying for the U.S.-rejected Trans-Pacific Partnership.

With such leadership at the top, it should be no surprise that State Farm has shown itself to be an aggressive advocate of radical social change in the U.S. The company boasts on its official website that it is a “founding sponsor” of a leadership development program for the Congressional Hispanic Caucus Institute , an organization that laughably bills itself as “non-partisan” while pursing a pro-massive immigration agenda.

State Farm is featured as a “Legacy Circle” “strategic partner” for CHCI on the organization’s website. State Farm Assistant VP of Human Relations Rich Garcia is a member of its Board of Directors.

Despite its claims of non-partisanship, Congressional Hispanic Caucus Institute is listed as a “Member organization” of the National Hispanic Leadership Agenda right below a statement that that group issued slamming Trump’s immigration policies.

“Central to NHLA’s recommendations for immigration reform is that any legislation must be based on a framework that would allow the 11 million undocumented immigrants in our nation to earn legal status, then citizenship, that recognizes the unique situation of our DREAMers and agricultural workers, and that addresses the unfairness in our existing policies and practices,” the manifesto reads.

CHCI can be found parroting all the usual pro-immigration talking points, such as opposing “separating families” of the alien hordes trying to push their way into our country.

Under a section on its website listed, “Our Highest Honors,” CHCI reveals that it gave former Rep. Luis Gutierrez its “CHCI Legacy Award” in 2018. Gutierrez was one of the most extreme open-borders advocates in congressional history before suddenly announcing his retirement in 2017.

In addition to its involvement with CHCI, State Farm is on the Corporate Board of Advisors for Unidos , the pro-illegal alien powerhouse organization formerly known as the National Council of La Raza , and is a financial supporter of Casa de Maryland , an especially vehement advocate for illegal aliens that was reportedly founded by ex-Marxist guerrillas from El Salvador.

State Farm also proudly backs a group called OCA – Asian Pacific American Advocates. Formerly known as the Organization of Chinese Americans, OCA is a fervent proponent of massive immigration into the U.S. “Any form of comprehensive immigration reform must also include provisions to provide a pathway to citizenship for the over 11 million undocumented immigrants in the United States, along with a repeal of the sections of the 1996 immigration laws that limit judicial discretion in detention and deportation cases,” reads a policy statement on immigration at the group’s website.

On its own website, State Farm brags that “OCA… honored State Farm as the Outstanding Corporate Partner making us the only two-time recipient in the award’s history (2008, 2002).” The State Farm site also features a glowing article gushing over an activist who went “from refugee to Asian Pacific American Advocate” thanks to OCA. “Immigration, education, and mental health are all things that the Asian American community needs to be actively engaged in,” Hari Adhikari is quoted as saying about his work. “OCA has helped put me in a position where I must speak up,” he continued. “Going through all these State Farm programs was an eye-opener, and I did not know a lot of the things I know today.”

In 2010, the corporation bestowed upon OCA a six-figure grant for a program that “has been sponsored by State Farm since 1994.” Indeed, State Farm’s roots in the social transformation of America run deep. Its staffers are also actively participating in the fight.

AAAJ authored a 2015 article on Medium.com titled “Community Partners Inform Priorities for Immigrant Integration.” The article reports on a special meeting of “community partners” with AAAJ to promote “immigrant integration.” At the end of the article, the group issues a “special thank you to State Farm and Southwest Airlines for sponsoring this event.”

Turning away from the immigration issue, a State Farm executive is a key player in a highly influential pro-homosexual organization that is a leading force behind many of the rabidly insane legislative proposals being reported out of California in recent years.

The “School Success and Opportunity Act” was passed in 2013. “The bill required public schools in the state to allow transgender students to use bathrooms, and participate on sports teams, that match the gender they identify with,” Ballotpedia states.

The following year, an effort was made to do away with the mandates on school sports and bathroom use. Among those strongly opposing the effort to change the pro-transgender kids law was an organization called Equality California. “Protecting this law is our number one priority, and we will put everything we’ve got into it,” the group’s executive director John O’Connor said at the time.

As this battle was raging, State Farm was listed as a “Statewide Sponsor” of Equality California in its 2014 annual report (see last page, back of report). But the intimate ties run even deeper.

Cathy Schwamberger, State Farm Associate General Counsel, is Co-Chair of Equality California’s Board of Advisors. In 2018, she was honored for her “leadership in the fight to advance LGBTQ civil rights and social justice at the organization’s annual Sacramento Equality Awards.”

An example of Equality California’s idea of “social justice,” backed by State Farm, can be found in the state’s alarming new guidelines on sex education in public schools. According to a Fox News report:

“Ultimately, California’s finalized framework [on sex-ed in schools] tells teachers that students in kindergarten can identify as transgender and offers tips for how to talk about that, adding ‘the goal is not to cause confusion about the gender of the child but to develop an awareness that other expressions exist.’

Dismissing parental objections, Equality California is an enthusiastic champion of the new guidelines. “We don’t believe any of this will prime students to do anything they wouldn’t normally do,” Equality California communications manager Josh Stickney told the Sacramento Bee. “It’s important to dispel myths and stigma around sex health for the LGBT community. That starts with awareness and sex education.”

From advocating for the massive unchecked wave of Third World immigration that is changing the very fabric of our culture to actively participating in the sexual and gender warping of children, State Farm has its fingers thoroughly plunged into a number of poisonous pies. With “good neighbors” like this, is it any wonder we need a Wall?