Old NWO stars don’t go to heaven when their careers die; They head to the Aspen Institute

Of all the progressive globalist groups being financially aided by major corporations today, the Aspen Institute qualifies as something of an odd duck. This is an organization that is absolutely swimming in cash. Leftist “philanthropic” titans such as the Tides Foundation the Rockefeller Foundation, and yes, of course, organizations run by George Soros, are generous donors. The Bill & Melinda Gates Foundation alone has made multiple grants of over $1 million to Aspen in recent years.

Yet its professed mission statement is rather vague and almost tranquil. “The Aspen Institute is an educational and policy studies organization based in Washington, DC,” an “Our Mission” post on the Aspen website reads. Its aim is to “[s]park intellectual inquiry and exchange, connecting new concepts to timeless values” to help “[c]reate a diverse worldwide community of leaders committed to the greater good.” 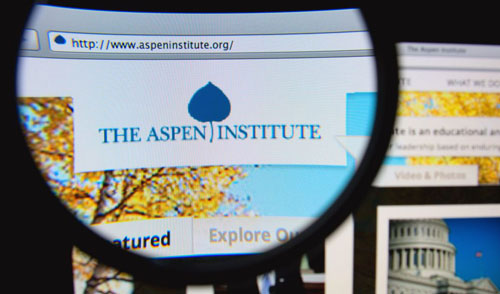 Aspen seems to be obsessed with racial issues and the phantasm of white privilege on one hand and deeply committed to boilerplate neocon national security and foreign policy on the other. Radical Ivy League professors and the co-author of the Patriot Act both find a comfortable home within the Aspen tent.

On the surface this may appear to be rather incongruous, yet in fact the synchronicity is flawless. “Anti-racism” agitation is a cultural Marxist tool meant to divide and demoralize a population. As a power apparatus, it works every bit as effectively as the military industrial complex fawned over by interventionist neocons, who, after all, trace their lineage back to Leon Trotsky.

Another curious and somewhat humorous characteristic about the Aspen Institute is that it operates as a sort of Senior League for has-been ex-stars of the socially progressive/foreign policy globalist interventionist New World Order. Perusing its many articles, reports, podcasts and videos one comes across names once hailed as mighty influence-makers in mainstream media and big government. Katie Couric, Condoleezza Rice, Judy Woodruff, Susan Rice and Andrea Mitchell are just a few that immediately stand out.

Along with Couric and Condoleezza Rice, ex-Bill Clinton Secretary of State and globalist warhorse Madeleine Albright and uber-powerful former Disney CEO Michael Eisner are members of Aspen’s eclectic Board of Trustees.

Aspen is stridently pro-immigrant and pro-refugee but prefers to focus on stirring up racial divisiveness above all. An “Identity and Equity” post on the group’s website features an Aug. 16 article by Johanna Hanink, an “associate professor of classics at Brown University and a partner of the [Institute’s] Citizenship and American Identity Program.”

Hanink critiques plans for a new U.S. citizenship test, lamenting that the Trump administration will have a nefarious hand in developing the questions to be asked.

“It is a shame that the exam’s next iteration will be determined by an administration so committed to a radically outdated and exclusionary national narrative (the current acting director of UCSIS, Ken Cuccinelli, is hardline immigration restrictionist),” Hanink wrote.

By outdated, this woke academic is of course referring to our Founding Fathers:

“I see it as an obligation of citizenship that those of us with a different story in mind, one in which white privilege plays a more important role than ‘Poor Richard’s Almanac,’ keep a close watch on the revision process,” she continued. “The civics portion of the naturalization test is the single most concrete expression of the government’s official definition of what defines us as Americans.”

A Sept. 6 “Aspen Ideas to Go” podcast paints a glowing Oprah-esque portrayal of Valerie Jarrett, perhaps the most radical progressive extremist in the Obama administration. Barack Obama’s scandal-plagued former senior advisor is hailed in the podcast for breaking “race and gender barriers in the 1970s and 1980s and work on equality for women and girls, civil rights, and our criminal justice system” as she tracked a course that eventually led her “to the West Wing” despite all the obstacles in her path.

Aspen’s 2019 Impact Report makes clear that the group considers networked power as essential to implementing its racial and socially progressive agenda. “Today institutions like ours must make a difference,” the report states. “There’s a hunger for hope. We need to come together to drive progress in addressing threats like climate change, economic insecurity, racism, and polarization.”

The organization does stake a bland and generic claim to “nonpartisanship.” This is fulfilled in the usual way, by trekking out notorious faded RINOs for self-congratulatory “dialogue.” Never Trumper former Arizona Sen. Jeff Flake is always useful for this purpose, and he has indeed been involved with Aspen.

Given the litany of washed-up names that dot the Aspen landscape, it is actually a comfort to watch former House speaker Paul Ryan take part in an Aspen Ideas session with Judy Woodruff. The PBS dinosaur in a June interview lobbed a succession of softball questions at the casually dressed Ryan. Woodruff asks, “Is the GOP now the anti-immigration party?” and the ever-boyish Ryan sternly responds, “No it’s not.” He then proceeds to call for a guest-worker program and visas to deal with our “labor shortages.”

Ryan may very well remain a substantial player behind the scenes in years to come but it is clear watching this energy-devoid conversation that he is fully aware that he personally has no popular base of support with the American people at all anymore.

Marching out the RINOs is perhaps a good way for Aspen to transition away from fomenting against so-called establishment “white privilege” and focusing on its stalwart support for cherished establishment globalist policies vis-à-vis U.S. “national security” and foreign policy.

In a pro-NATO speech closing the 2019 Aspen Security Forum on July 20, the institute’s president and CEO Dan Porterfield laid out Aspen’s globalist bona fides. “In an era when we face rising nationalism, refugee crises, cyberwar, trade wars, nuclear threats, and emboldened adversaries, the world calls out for solutions. At the Aspen Institute, and in America, and among our global allies, we believe it is networks of values-driven leaders working together who protect the peace and promote prosperity,” Porterfield said.

Perusing the foreign section of the Aspen website finds a litany of material backing the ruling global establishment. Similar to the Valerie Jarrett paean is a love letter by José M. de Areilza, “secretary general of Aspen Institute España,” to German Chancellor Angela Merkel. De Areilza crafted a “Profiles in Courage” narrative for Merkel, praising her for pushing the refugee invasion on unhappy German citizens despite the negative blowback she would receive.

“Angela Merkel, the most powerful woman in the world, is preparing her exit from politics, faithful to the principles that have inspired her for 30 years: realism, caution, flexibility, sobriety, as well as a profound knowledge of the issues at hand and a deep moral commitment to human dignity,” de Areilza wrote in the Dec. 13, 2018 piece.

“Angela Merkel set out to defend the human dignity of refugees, subject to xenophobic attacks, but also to ensure that international norms and European asylum pacts were applied….  [S]he stated dramatically that if Germany was not capable of receiving refugees, it was no longer her country.”

Former George W. Bush Homeland Security Secretary Michael Chertoff is “co-chair” of Aspen’s “Homeland Security Group.” Chertoff co-wrote the controversial Patriot Act that still poses a threat to the civil liberties of American citizens to this day. He was an avid defender of National Security Agency surveillance of citizens even after it came out that the NSA was eavesdropping on Americans without court order.

The Aspen Institute has a transparency page that lists various financial statements. Its 2018 Transparency Report (see “2018 Support By Program”) details specific corporations that donated to the group’s “Homeland Security Program.” It’s extremely interesting to see an online corporate giant like Amazon target-fund a program headed by a chief architect of the U.S. surveillance state. Other corporations listed include American Airlines, military contractors Lockheed and MITRE and Microsoft.

Further scrolling through the document shows corporate donations for Aspen’s pro-illegal immigration “Latino and Society Program.” A fiercely ethnocentric Sept. 13 blog post under this program on the Aspen website urges, “Do Your Part: Shop Latino on Support Latino Business Day.”

“The Latino community is experiencing trying times, from harmful rhetoric resulting in an uptick in hate crimes and attacks against those who speak Spanish in public, to immigration raids and the separation of families, to the othering that results from failure to tell the positive stories of Latino contributions in the news media,” the fiery article by Maria Samaniego begins.

“Latinos are driving new-business creation, starting businesses at two times the rate of other groups, while non-Hispanic white business creation has been in decline,” Samaniego goes on to triumphantly declare.

Companies that specifically funded the Latino and Society Program at Aspen include the Bank of America Charitable Foundation, Comcast and the Target Foundation.

Numerous corporate brands can be found throughout the financial statement. A “Sports & Society” program was funded in part by Major League Baseball, the National Hockey League and golf’s PGA of America.

The Aspen Institute may come off at times as a retirement home for aging former New World Order all-stars but the sheer weight of its networked financial support indicates that its many programs and reports carry substantial clout in the push to transform society today.