A 2022 candidate’s Nov. 9 comments highlight how a crucial divide among Republican officials is the hot political story right now. 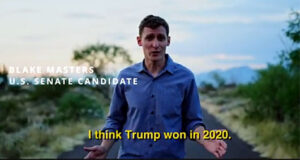 This divide is between those who believe our political system is rigged and must be reformed from stem to root vs. those who want GOP voters to go back to focusing on easy comfort food issues while ignoring the ingrained rot in America’s institutions today.

WorldTribune focused on this core 2022 issue in the recent Virginia gubernatorial election.

“Don’t you think that this article would’ve been helpful BEFORE the election?”

Well, we raised the alarm about Youngkin’s Soros, Clinton and Deep State ties as far back as May. We wrote about the false choice presented by him and fellow globalist Terry McAuliffe in October, and we posted an article that ran Election Day morning Nov. 2 warning that for an American First citizen to vote for a RINO is to actively participate in their own lack of political representation.

But Virginia is over. So we’re writing about 2022 right now.

Here are two examples. One is a U.S. Senate candidate out of Arizona and one a leading gubernatorial candidate in Wisconsin.

2022 Arizona U.S. Senate candidate Blake Masters made noise on Nov. 9 by steadfastly refusing to walk away from the 2020 election fraud:

America’s most powerful institutions conspired to manipulate the 2020 election. Donald Trump should be president today. pic.twitter.com/zGKGsxHOmI

There are those who stand up for Kyle Rittenhouse, and there are cowards. Choose wisely. https://t.co/Wc2HaVvdT4 pic.twitter.com/mzJwBxYB8t

In 2019, a second Walker son, 25-year-old Matt, seriously considered running for Congress in a safe GOP district. Walker shamelessly attempted to drape this repulsive nepotism as an attempt to beat back those crazy liberal Democrats:

“He’s had a number of people reach out to him,” Scott Walker said in an interview on WISN-TV. “I think in particular what intrigues him is he feels frustrated that AOC (New York Rep. Alexandra Ocasio-Cortez) somehow nationally is reflective of his generation. He’s 25 and he feels like there needs to be a counter-voice to that.”

Wasn’t there supposed to have been a cleansing storm in 2016 that cleaned up these filthy GOP Swamp stables?

You are allowed one guess as to what Kleefisch is centering her campaign around. Yes, for the GOP establishment, bashing Critical Race Theory is the easy, lazy way for them to worm their way into your heart.

Mimicking Youngkin in Virginia, CRT is the first “priority” listed on Kleefisch’s official campaign website. Note the others: Abortion, guns, vague phrasing about securing elections and “growing the economy” – all comfort food for red voters. But Kleefisch offers no explicit support for putting the interests of the American people first in the face of an unprecedented assault on our traditional freedoms and norms by an administration installed in the White House by the most controversial election night events in modern American history.

Check out her gun priority – she’s posing with a rifle dressed to the gills in hunting gear!

Where have we seen this before?

Opening day of the full pheasant hunting season! Where are you hunting? pic.twitter.com/s3LjuvnU7r

Well, it’s only been the RINO playbook since forever:

The cover photo for Gov. Bobby Jindal's Facebook page is of him & 2 sons hunting with rifles, 1 w/dead bird in hand. pic.twitter.com/WRUuy8TqSK

This was all supposed to stop with Trump in 2016. Republican voters were demanding action over meaningless fluff.

So why is it flourishing once again?

Message to America First GOP voters: Vet Masters and Kleefisch thoroughly. Listen to what they are saying, pay attention to who they are.

Blake Masters to Steve Bannon: Big Tech is an existential threat to our very future:

“The phone company can’t kick you or me off, Steve, because we have a conservative conversation, because we’re MAGA. And so I don’t think Twitter or Facebook should be able to do that either. Then I think you go further still. I think Facebook needs to be broken up. Zero reason why they should be allowed to own Facebook Classic and WhatsApp and Instagram just so they can have all these different businesses to efficiently suck up all this data about people, so much more data than people realize.”

Rebecca Kleefisch in 2014 after visiting China to promote trade with Wisconsin:

“They said China would become No. 1 and the U.S. would experience unavoidable decline…. Nearly everyone I met was a member of the Communist Party.”

How fazed was she by all that? Here is what she told an official Chinese communist propaganda news organ three years later:

It’s always better to have two teammates pulling in the same direction. It’s only going to further our bonds and economic ties…. We see China as a customer and a friend in our supply chain for years and years and years to come.

Is it any wonder Kleefisch was not a fan of Trump five years ago? As late as late July 2016 the pro-big corporate Kleefisch was running away from Trump, and foreign trade was a specifically cited reason:

Kleefisch didn’t mention Donald Trump by name in her speech to Wisconsin delegates, but told reporters she differs with him on issues like trade.

This is not a mystery. The information is out there.

Notorious Wisconsin Never Trumper Charlie Sykes promoted Kleefisch hard throughout her political rise, even though she was considered a mindless Barbie to state Republicans at the beginning:

Kleefisch also set up her own marketing company. She also began making appearances on Charlie Sykes’ radio program on WTMJ-AM (620).

In May 2009, Kleefisch and her husband attended the state Republican Party convention in La Crosse. There was a straw poll for lieutenant governor, and Joel Kleefisch nabbed a few write-in votes.

Joel Kleefisch says he bumped into Sykes, who told him: “I think a Walker-Kleefisch ticket would be great but I think you’re the wrong Kleefisch.”

Sykes later pushed her as governor material. From an article that appeared in Bill Kristol’s now-defunct Weekly Standard:

Charlie Sykes, a popular Wisconsin radio host and political commentator, thinks her future might hinge on how Walker leaves office. If he doesn’t serve out his full term, he thinks she’ll be a dominant figure in the race. If he retires after his full term, it could be a much more open race — although Sykes says there’s “not a lot of buzz at all” about other potential candidates. It’s still early to predict much, but Sykes believes she “ought to be considered a rising star, even nationally.”

Yesterday Rachel Martin of National Public Radio was interviewing Charlie Sykes on Morning Edition for his thoughts on current state of the Republican Party. Sykes has won national fame as a anti-Trump Republican, who seemed the perfect guy to talk about the party’s handling of the impeachment trial and the refusal of Republican House members to vote for removing Rep. Marjorie Taylor Greene‘s committee assignments despite her calling for the execution of Democratic politicians. Juicy stuff to chew on.

“As a Republican, Charlie, where do you see the middle anymore?” Martin asked.

Sykes began his answer with this: “Well, I don’t consider myself a Republican anymore.”

The Republican Party does not need another vapid Kristi Noem with a pretty face to pose at the Reagan Ranch while wearing a cowboy hat as she bats her eyes and flirts with America Firsters while pursuing a hardline pro-globalist business agenda:

TONIGHT: Tune in to @newsmax at 8pm ET for a town hall featuring Governor @KristiNoem at the Reagan Ranch! pic.twitter.com/LK5re7Zxls

Do your homework, America First voters.

The stakes are too high. The fate of the nation is in the balance.