Another European has given a stirring address on the need to stand against elitist tyranny to preserve the God-given freedom of the human individual.

In June, Dutch conservative populist party leader and House of Representatives member Thierry Baudet created a sensation with a stunning speech at the nation’s Parliament in which he referenced a 2010 Rockefeller Foundation report that precisely laid out the authoritarian coronavirus lockdowns that would occur 10 years later. 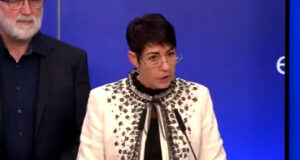 I quote: “To protect oneself against increasingly global problems — from pandemics and transnational terrorism to environmental crises and increasing poverty, leaders all over the world will increase their grip on power.”

That this would lead to a digital passport, the authors of the Rockefeller Foundation report had also foreseen. In 2010, the Rockefeller Foundation was not able to literally predict the current technological state of things, but they thought then that sharpened supervision would lead to a biometric ID for all citizens. And it is now in our paper passports.

Fast forward four months, and the digital passport is solidifying its grip over the lives of Europeans. And now a German populist has stepped to the fore with a bold and eloquent denunciation of the encroaching peril.

On Oct. 28, a group of European Parliament Members (MEPs) spoke out against the Digital Green Certificate, a COVID digital passport for those seeking to move about freely in the European Union. A staggering 27 EU nations currently use the Green Pass, according to the European Commission, and another 18 outside the EU are hooked up to it as well.

Like Baudet, Christine Anderson, a MEP from the German conservative populist Alternative For Germany (AfD) party, has caused a splash with her astutely expressed defiance against the digital passport and all that it represents.

The full event can be seen here. Anderson re-posted this clip of her comments onto her Twitter page:

“In the entire history of mankind there has never been a political elite sincerely concerned about the wellbeing of regular people. What makes any of us think that it is different now. – Christine Anderson European Parliament.” pic.twitter.com/oSVYzg81p5

Her words were robust and moving. Some excerpts:

“Whenever a government claims to have the people’s interest at heart, you need to think again. In the entire history of mankind there has never been a political elite sincerely concerned about the well-being of regular people. What makes any of us think that it is different now?”

“Whenever a political elite pushes an agenda this hard, and resorts to extortion and manipulation to get their way, you can almost always be sure your benefit is definitely not what they have at heart.”

“I will not be reduced to a mere guinea pig by getting vaccinated with an experimental drug. And I will most assuredly not get vaccinated because my government tells me to, and promises in return I will be granted freedom.”

“Let’s be clear about one thing: no one grants me freedom, for I am a free person.”

“So I dare the European Commission and the German government. Throw me in jail. Lock me up and throw away the key, for all I care. But you will never be able to coerce me into being vaccinated if I, the free citizen that I am, choose not to be vaccinated.”

It was left off the Twitter clip, but Anderson concluded with an ominous warning:

“The compulsory use of the Digital Green Certificate undermines everything that Europeans stand for. It violates constitutionally guaranteed fundamental rights and constitutes the first step towards the insufferable Chinese social credit system. I will never stand for this. I will never put up with it.”

The European Commission has a page on its website dedicated to its EU Digital COVID Certificate. It is frightening in its banality (bold added):

How does it help free movement?

The EU Digital COVID Certificate is accepted in all EU Member States. It helps ensuring that restrictions currently in place can be lifted in a coordinated manner.

In such a case – for instance as a reaction to new variants of concern – that Member State would have to notify the Commission and all other Member States and justify this decision.

This clearly represents the establishment of a two-tier system of freedom for Europeans, a more relaxed one for those who comply with coercive government vaccine mandates and a more stringent regimen for those who refuse to be bullied.

The ruling elites’ media annex operates much the same across the Atlantic as it does here. The EU Observer, an online newspaper that covers the European Union, wrote of the MEPs who spoke out against the Digital Passport (bold added):

A group of MEPs resorted to scare tactics and false information on Thursday (28 October) to rail against the European Parliament’s plans to impose a digital green pass next week in order to gain access to its buildings….

Covid-19 vaccines have also been proven safe and effective, greatly reducing viral induced symptoms that can kill and hospitalize the unvaccinated.

Like all vaccines, they are first vetted and tested before approval by the European Medicines Agency. This includes clinical trials involving thousands of people.

A Pravda-like controlled press and the need to show your papers before you are allowed to walk around freely. The authors of that 2010 Rockefeller Foundation report cited by Thierry Baudet must be rubbing their hands with glee as the operation they envisioned continues to roll.