It is vital that the America First alternative to the Swamp Uniparty fully vet the people it supports before pushing them for bigger and better things. Kristi Noem is the latest example of the potential perils involved in a failure to do so.

The South Dakota governor who has been hailed as a rising star within the ranks of Donald Trump’s America First-dominated grassroots GOP and a potential 2024 presidential candidate pathetically caved on protecting female sports from the radical transgender agenda last week. 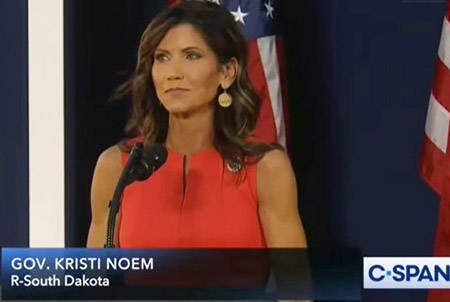 In a remarkable display of tone-deafness as to how she would appear to a GOP base that especially despises the weakness long associated with elected Republican officials, Noem telegraphed her malleability by resorting to a particular term in demanding changes to a bill that had cleared the South Dakota legislature.

Republican voters who have had to endure Bushes, Romneys and other assorted “compassionate” deceivers for most of the past three decades instantly recognize “empathy” as a favorite weasel word of politicians who are up to no good:

Overall, these style and form clarifications protect women sports while also showing empathy for youths struggling with what they understand to be their gender identity. (18/)

In the big picture, MAGA advocates should be relieved. In hindsight, it was inevitable that Noem would out herself eventually, and now she has. Kristi Noem is not and never was an America Firster. She is a free-market gal much more comfortable with Paul Ryan, whom she closely aligned herself with while in Congress, than Donald Trump.

Noem’s transgender crumble surely had everything to do with corporate pressure. Amazon has long demanded that states clamoring for the retail goliath to open warehouses or office headquarters in their locales toe the line on its woke social beliefs. Transgender rights are a very big part of that agenda.

And Amazon just so happens to be about to open a new fulfillment center in Sioux Falls next year. Noem tweeted out her enthusiastic welcome to Amazon in December:

South Dakota is open for business! Thanks to this commitment, we're welcoming Amazon to Foundation Park in Sioux Falls.

They're investing 1,000 jobs in South Dakota (including excellent benefits) to fuel our economic growth for the next generation.https://t.co/ZCvR04IT60

Is it going too far to state that Kristi Noem is more than willing to abide evil when a good business deal is at stake? Well, here’s something to consider.

Noem was a featured speaker at a blatant Chinese propaganda event held in the U.S. in 2019. A forum was conducted by Horasis, a rabidly globalist and stridently pro-China think tank. The Las Vegas gathering was co-hosted by the U.S. Chamber of Commerce and the China Federation of Industrial Economics.

The China Federation of Industrial Economics is a communist state-run outfit.

“The program is designed to facilitate Chinese and American business-to-business engagement, cooperation and relations, and to create opportunities for businesses in both countries,” said Horasis Chairman Frank-Jürgen Richter.

The two governors were touted in the promotional material:

China and the US: Seeking a Win-Win Partnership, with Pete Ricketts, Governor, Nebraska and Kristi Noem, Governor, South Dakota

After the forum concluded, Ricketts and Noem were regaled in China state-run media outlets for backing Chinese arguments against any slackening of U.S.-China business relations. From a report by CGTN, an outlet that was officially designated by the U.S. as a communist “propaganda apparatus” in 2020:

Cui [Tiankai, China’s ambassador to the U.S] also used the occasion to reject statements by hawkish Washington strategists who favor the “decoupling” of U.S.-China relations.

Two Republican governors also echoed that sentiment. They said the tariff war has hit local farmers hard and they want U.S.-China economic relations to be restored sooner, rather than later.

“This tariff disputes that we’ve had has dramatically impacted South Dakota,” said Kristi Noem, governor of South Dakota. “We are seeing as a state where…there are less opportunities, lower prices, our farmers cash aren’t flowing quite well and they are struggling. And we’d love a finalized agreement with China and get it across the finish line.”

“The state of Nebraska is about half of all the U.S. beef that is going to China,” Ricketts said. “What we’d like to see is just a consistent and growing market place to have our farmers and ranchers be able to sell their agricultural goods.”

Video of Noem speaking at the forum can be seen here:

Dr. Frank-Jürgen Richter is the Chairman of Horasis. His bio emphasizes his globalist credentials:

Dr. Richter was a Director of the World Economic Forum. He also lived, studied and worked in Asia for almost a decade, principally in Tokyo and in Beijing where he developed and managed European Multinationals’ China operations.

Richter prominently played up Noem’s shocking call for no restrictions on American individuals and companies cutting deals of their own with China during his “Report of the 2019 Horasis China Meeting, Las Vegas, USA, 28-29 October.” Richter wrote that Noem’s remarks greatly pleased China:

These sentiments were welcomed by Xiong Meng, Executive Vice Chairman, China Federation of Industrial Economics, China, who reiterated that China would welcome a new stability – new ventures could blossom for US entrepreneurs across many Chinese sectors from Fin-tech through to investing in enterprises along the hubs of the Belt and Road initiative of President Xi Jinping.

A “Impressions from the 2019 meeting” sidebar on the Horasis website for its 2021 China Meeting features pictures of Noem and Ricketts. Under Noem’s photo is the statement on individuals, businesses and states. Under Ricketts photo, he is spotlighted as stating that “Subnational cooperation will boost bilateral ties between China and the US. It’s through the efforts of the States we are able to open up the relationships and be able to establish connections.”

The importance of this cannot be overstated. Noem and Ricketts are specifically championing the very thing Trump Secretary of State Mike Pompeo warned is a dire national security threat: the brazen and reckless deal-making with China by individual U.S. governors across America.

We’ve reported how Washington Gov. Jay Inslee has enticed Chinese businessmen by offering his state’s “rocketry” technology and Arizona Gov. Doug Ducey has dangled high-tech “aerospace” and “defense industry” material to the communist superpower in order to steer Chinese money to his state.

Noem and Ricketts in 2019 distinctly defended this kind of deal-making by U.S. governors with China, and their statements on the matter are being used to this very day by a pro-China think tank to promote this dangerous threat to our national security. And you thought caving on transgenders for Amazon was bad?

In 2015 as a member of the House, she staunchly supported giving Barack Obama fast-track authority on negotiating the globalist Trans Pacific Partnership pact. The Obama administration’s Office of the United States Trade Representative used her comments to promote fast-track for Obama:

Representative Kristi Noem (R-SD): “95 percent of the world’s consumers live outside our borders, so America limits its growth if we can’t reach them on a level playing field…. I applaud the U.S. Senate for passing this critical bill and I strongly urge the President to move quickly in signing it.” [06/24/2015]

In 2019 as governor, Noem defied Trump on refugees, welcoming them into South Dakota and spurning an opportunity afforded by the president to cut down on their number.

Noem gave plenty of evidence of her establishment Republican orientation during the 2016 GOP primary that saw the rise of Trump and his America First movement. In October 2015, well after Trump had taken the party by storm, Noem voiced her praise for… lightweight Florida Sen. Marco Rubio and “I’m the woman candidate” Carly Fiorina:

Of all the Republican presidential candidates, Noem said Marco Rubio was the strongest on foreign policy, as that has been one of his primary interests since he took office. She also said she met with Carly Fiorina and thought she was a good candidate, but she does not plan on giving anyone a formal endorsement.

“Marco Rubio represents the kind of next-generation conservative leader that puts our party in the best position to win back the White House next year.”

In late April 2016, when Trump had a stranglehold on the party nomination, Noem bought into establishment framing about him being in trouble with women, going along with shallow identity politics propaganda in the process:

Republican women say Trump has a long way to go in improving his standing with female voters.

“He’s said some things that have been very offensive in the past. I don’t know how you build those bridges back. Potentially he could. But it’s a little tough,” said Rep. Kristi Noem (R-S.D.), who had endorsed Sen. Marco Rubio (R-Fla.) before he ended his campaign in March.

Still, Noem said that Trump would send a powerful message by choosing a woman as his vice president.

“I just feel like whenever you have a woman at the table, you have a better perspective on every single issue. Women are the majority of the voters in this country. Whenever I’ve been in a discussion where women and men are at the table, I feel like it’s more rounded. It’s more collaborative,” Noem said. “So I think it would bring a lot to his ticket if he were able to do that.”

In 2015, Noem declared that “Donald Trump went over the line with his comments about blocking Muslims from coming to the United States,” a Yankton, South Dakota radio station reported of an interview with her.

“Well, he’s not my candidate. People came to this country for religious freedom,” Noem told WNAX. “So, I believe his statement was un-American. And I don’t agree with it.”

Yet in 2013 Noem voted against halting a federal National Security Agency program that collected phone records on hundreds of millions of Americans, citing “terrorism” concerns. So Noem as a U.S. congresswoman wanted to roll out the welcome mat for Muslim refugees, but didn’t want to end government surveillance of U.S. citizens because terror. Got that?

Kristi Noem has channeled bloviating former South Carolina Gov. Nikki Haley as well. Haley has never been forgiven in Palmetto State conservative circles for abandoning the Confederate flag and its proud heritage in South Carolina. While South Dakota is a far ways from the Old South, it has strong Civil War roots of its own and thus has had its Confederate flag controversies in recent years. And when push came to shove, Kristi Noem, like Nikki Haley, was there to support the history erasers.

In a sign of patriotic good sense, Rep. Kristi Noem voted yesterday for an amendment to the Veterans Affairs and military construction bill that would ban flying the traitor Confederate flag over national cemeteries. Rep. Noem was among 84 Republicans and 181 Democrats who supported the amendment from Democratic Rep. Jared Huffman of California.

Kristi Noem’s transgender cave-in does not mark one moment of weakness. It is perfectly in keeping with a Republican establishment politician who is quite willing to discard any and all principles so long as a business deal and a cold buck are at stake.