A Fairfax, Virginia mother is making quite the case for her allegation that a massive conflict of interest is fueling Biden administration Attorney General Merrick Garland’s targeting of parents who question their local school boards as possible domestic extremists.

In an appearance on Fox News on Oct. 6, Asra Nomani wore a T-shirt declaring “I’m a Mom, Not a ‘Domestic Terrorist.’ ” 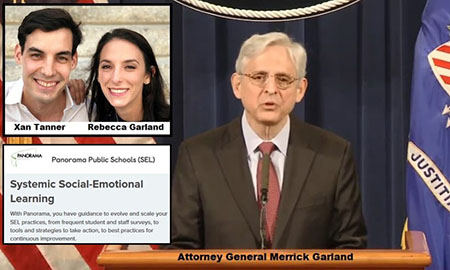 U.S. Attorney General Merrick Garland has shocked America with a declaration of war on parents, marshaling the powers of the FBI against parents. What isn’t mentioned? Garland’s daughter is married to the co-founder of a Big Tech business — Panorama Education — funded by Facebook founder Mark Zuckerberg.

In early September, a parent tipped us off at Parents Defending Education, an advocacy group, that Fairfax County Public Schools had quietly signed a $1.8 million contract with Panorama Education, a Boston-based Big Tech contractor, to conduct a multi-year “social and emotional learning screener,” giving them the right to collect “psychometrics” on the school district’s 180,000 students with invasive questions such as whether they feel “sad” or “gender fluid.”

Panorama Education staff gets status as “school officials” so they have the right to private student data under federal law, according to an email from a Fairfax County school district official.

This is federal law that Garland would have to enforce and Big Tech is now circumventing.

Why does it matter? Facebook founder Zuckerberg is an investor in Panorama Education, which is signing contracts with school boards across the country that are providing the company a backdoor to children’s most intimate feelings. The company is now a Trojan horse for Big Tech in K-12 schools. A whistleblower yesterday testified in Congress that Zuckerberg has been exploiting new “growth projects.”

K-12 education is clearly one of those “growth projects.”

She notes Garland’s family is poised to profit handsomely off of the arrangement:

Our parent whistleblower sent us the tip she found with a simple Google search: Garland’s daughter is married to Xan Tanner, a co-founder of Panorama Education. Garland’s family is profiting off the business decisions of school boards. Garland’s family will benefit from the silencing of parents.

The indictment is compelling.

A culturally leftist social engineering project unleashed on the Fairfax public school system furthers a Big Tech oligarch’s efforts to card-catalog American citizens and will financially benefit the attorney general’s daughter. Local parents object to both the indoctrination and the assault on the privacy of children. Attorney General steps in and threatens to use federal policing power to destroy them as extremists whose actions “run counter to our nation’s core values” (direct quote).

Ah, that again. The progressive ruling establishment sees these kind of verbal trappings as an essential weapon in crushing all dissent to its agenda.

As WorldTribune noted in June, The University of Virginia announced the launching of a $100-million “Democracy Initiative.” Headed up by a former Obama administration alum and leftist D.C. think tank veteran, the “promotion of democracy” involves utilizing the overblown Jan. 6 Capitol unrest to further a narrative that America’s institutions are under attack by crazed segments of its own citizens, and must be defended.

There has always been a level of distrust in the federal government. Over time – not just the last four years, but the last 50 years – that distrust has grown, leading some to abandon our democratic institutions, the architecture of our democracy. That is an important element of what we saw on Jan. 6 [in the insurrection at the U.S. Capitol].

This is the theme that never stops giving, and there is no reason to limit it just to those who dare criticize federal representatives. It can be repurposed at will to serve as a one-size-fits-all hammer against anyone who ever questions any form of official “authority.”

Blood-stained ghosts from nearly 30 years ago are stirring. And the very people who were intimately associated with those who covered up the FBI murder of American citizens at Ruby Ridge in 1992 and then orchestrated the mass slaughter at Waco one year later are now declaring parents who question local school authority to be potentially lethal threats.

The implications are horrifying.