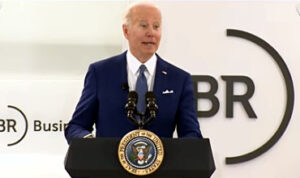 Biden spoke before an organization called the Business Roundtable on March 21. He said:

“We’re at an inflection point, I believe, in the world economy, not just the world economy, the world, that occurs every three or four generations,” the president said. “[A general told me that] 60 million people died between 1900 and 1946 and since then we’ve established a liberal world order, and it hasn’t happened in a long while.”

“A lot of people died, but nowhere near the chaos.”

“Now is the time when things are shifting and there’s going to be a new world order out there, and we’ve got to lead it. We’ve got to unite the rest of the free world in doing it.”

It is crucial to note that Biden is both lamenting the dissipation of a former iteration of globalist structure, the post-World War II neoliberal order, as he and his powerful business cohorts mull how to cement control of what is to follow in its flickering wake.

In July 2020, WorldTribune documented the fierce allegiance FedEx Chairman Frederick W. Smith, a member in good standing of the Business Roundtable, had for this neoliberal order and what it meant for multinational corporations such as his. Smith said upon receiving the arch-globalist Atlantic Council’s Distinguished Business Leadership Award in 2019:

“Following World War II, the U.S. worked hard to develop rules-based institutions such as the IMF… the World Bank and the General Agreement on Tariffs and Trade, which became the World Trade Organization in 1995,” he continued. “Without question, such institutions fed the growth of global prosperity in the latter half of the 20th century.”

The “rules-based international order” that Biden and Smith pined over is now transforming into something else. Far from having any loyalties to the United States, Biden and the Business Roundtable are committed to positioning the internationalist organizations Smith references at the head of the next world order.

It is no exaggeration to assert that the Business Roundtable is at the epicenter of all the ruling establishment monolithic power grabs of recent years. As WorldTribune reported in October 2020:

Former George W. Bush chief of staff Joshua Bolten is president and CEO of the Business Roundtable. According to his official bio there, he is also on the Board of Directors for rock star Bono’s George Soros and Bill Gates-aligned ONE Foundation.

Before joining Business Roundtable in January 2017, Bolten was Managing Director of Rock Creek Global Advisors, a consulting firm that he co-founded in 2011. Bolten spent the preceding two years as a visiting professor at Princeton University….

Bolten is also on the “National Welcome Council” for Welcome.US, an extraordinary group that was put together by the Rockefeller Foundation seemingly overnight as the Biden administration gave up the ghost in Afghanistan and the push to import massive numbers of refugees from the Third World Central Asian nation into American communities got underway at full gallop:

The Rockefellers decided to launch a new mass migration movement into the U.S., and the sheer size of scope of the network constructed is startling. Click on this link and just keep scrolling down to get a feel for the vast influence the Rockefellers wield.

But right alongside leading progressive globalists such as Cecilia Munoz and Anne-Marie Slaughter you can find the smiling faces of no less than three former Republican governors – Sam Brownback of Kansas, Gary Herbert of Utah and Dirk Kempthorne of Idaho.

Also on board are executives from Airbnb, Microsoft and Walmart, a Roman Catholic cardinal and bishop, the deputy managing editor of The New York Times and a columnist for The Washington Post.

That is called a network, folks.

The Business Roundtable also spearheaded the oppressive Coronavirus vaccine machine in the U.S. Vaccine manufacturers Johnson & Johnson and Pfizer are both represented on the group’s membership scroll. Yes, Pfizer CEO Albert Bourla’s smiling face can be seen prominently displayed on the BR website.

The Business Roundtable’s “Move the Needle” campaign explained what the group felt was the necessary role played by Big Business in pushing the Jab to all Americans:

Business Roundtable companies are “moving the needle” by producing, distributing and administering the vaccine. In addition to developing the vaccine, like members Pfizer and Johnson & Johnson have done, Business Roundtable members are playing a leading role administering the vaccine, which is now available at Walmart, CVS and Walgreens. Mass vaccination sites like the one run by Honeywell at Charlotte Motor Speedway allowed thousands of people to get their vaccination in one weekend. Amazon, Starbucks and Microsoft are coordinating with Washington state leaders in the same capacity, vaccinating thousands of Americans in a safe and effective setting with low wait times.

BR also advocates for illegal aliens. Under its “Immigration Committee” listing, it declares:

Specifically we work towards…

Ensuring a pathway to citizenship for dreamers — the hard-working students, employees and members of our armed forces who contribute a great deal to our economy and society.

Business Roundtable Board Member Chuck Robbins, CEO of multinational tech conglomerate Cisco, displayed the global corporate interests personified at the organization with his opposition to President Trump’s get-tough policies on China. As we wrote in October 2020:

Robbins himself has specifically said that tariffs against China hurt his company. Asked in a Sept. 2018 CNBC interview about the impact “protectionism, tariffs” would have on Cisco due to the trade war with China, he replied:

“We have this incredibly strong global economy right now, and I think the number one risk is that this thing escalates even beyond where it is today…. The tariffs that are suggested are across a lot of our core networking products, so it’s fairly significant.”

He cloudily admitted that Cisco was pressuring the Trump White House to ease off on the communist powerhouse. “We continue to try to educate the administration on some of the unintended consequences which are always there when you’re working on these complicated issues,” is how an obfuscating Robbins put it.

These are the people to whom Joe Biden pledged his devotion to a New World Order on March 21. As usual, anyone taking his words seriously has been immediately derided as a conspiracy theorist on steroids by the servants of the ruling establishment who control the dominant media and political “punditry” professions in this country.

As World Tribune noted the same day Biden spoke, a new propaganda line is being rolled out. It is meant to convince Americans that it is not blind obedience to but questioning of ruling class narratives that is the true mark of gullibility today:

Extreme skepticism is a form of credulity.

When it comes to the purveyors of a globalist New World Order, the “extreme skeptics” are apparently the ones who take the globalist ruling class at face value when it does in fact tell us all exactly what it plans to do.