As the female M&M’s characters brassily toss away their knee-high boots and stiletto heels in the name of gender neutrality, perhaps this is a good time to go into something Mars won’t be casting off anytime soon in deference to “the dynamic and progressive world we live in”: its unusually close ties to communist China.

Question — Why is the Mars Global Food Safety Center located in Beijing?

We love science at our Mars Global Food Safety Center in China! Meet some of our Global Analytical Research Associates. #WomeninScienceDay pic.twitter.com/FQNqGoK2Iv 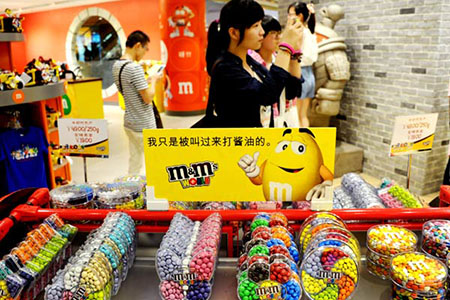 But the food safety center is just the tip of the iceberg. Mars does enormous business in China. A 2016 press release announcing a strategic partnership with Chinese e-commerce behemoth Alibaba states:

And here is Mars shilling for trade with China during Trump years:

Trade disputes have a significant impact on global supply chains, manufacturers and their workers, consumers, and economies. We hope this one with #China can be resolved amicably and consistent with international #trade rules.

Frolicking female M&M’s are a major concern, but Uighur slave labor is not: Mars Inc. is a sponsor of the 2022 Beijing Olympics.

But why not let the company’s highest-ranking executives illustrate the special relationship Mars has with the Red Asian superpower?

A 2015 interview by state-affiliated media outlet China Daily Asia with CEO Grant Reid has the snappy headline “Mars goes far on a sweet mission.” Reid is quoted as saying:

We have been in China for a few decades and we have got 13,000 associates. We also have seven state-of-the-art factories. Rather, we have deep roots in China.

We are not looking at an investment for one or two years. Instead, we see it as something for 50 or even 100 years.

We consider China more like our second home. As for the current investment, we think it is a good fit for our business and gels well with our future strategies for development in China.

I think that the center will be an ideal fit as there is an increasing awareness about food safety, both at the local and governmental level. The center will also help establish China’s global credentials.

Reid presents the center as a gift to a communist nation that has been so good for him and his company:

It is difficult for me to explain to analysts as to why I have invested US$15 million on a pre-competitive food safety center in Beijing. But I can easily convince the Mars family about the need for such a center. A private company always believes in giving back to the community in which it operates.

Mars family heir Frank Mars, a member of the company’s Board of Directors who has held numerous executive positions at Mars, Inc. over the years, appeared at the 2019 China Development Forum. According to the communist-canoodling US-China Business Council:

The China Development Forum is a major state-level international forum held every March since 2000. In order to adapt to the rapidly changing domestic and international situation, the secretariat of the Forum has decided to establish an additional SPECIAL SESSION from September 2018 to provide a platform for open and pragmatic dialogue among senior Chinese government officials, global business leaders, international organizations and Chinese and foreign scholars.

Mr. Mars was not alone in his networking with “senior Chinese government officials.”

For a weird and disturbing sight, check out Frank Mars in 2020 delivering what amounts to a canned propaganda video for the Chinese state on the coronavirus.

There’s much more Wokeness at Mars, Inc. that we can point out. The company’s Inclusion & Diversity initiative is as obnoxious as corporate America can get with these things, prattling on about:

…equipping our business with cohesive policies, processes, practices and training – including unconscious bias programs – that support our I&D aspirations.

“Diversity comes with discomfort. Embrace it” reads the headline of an October post at the Mars corporate website. The article is pure social justice babble. What does this even mean?

In many corporations, there are unwritten rules for career advancement; they boil down to demonstrating polish and composure. But polish and composure are narrowly defined by American and European standards. So even if we’re hiring diverse talent, imposing a one-size-fits-all approach to managing them suppresses their value.

Mars is a major financial supporter of the Third World refugee invasion of the West through its hefty donations to CARE.org. Mars can be found listed under the “Cumulative Lifetime Giving: $1,000,000+” category in CARE’s 2019 Annual Report.

Mars brand Skittles has long supported the homosexual agenda. It donates to GLAAD, a powerful homosexual lobbyist group that supports the glorification of adult-adolescent sex.

During PRIDE only #OneRainbow matters. That’s why we have given up our rainbow to show support for the LGBTQ+ community! For every SKITTLES Pride Pack sold we are donating $1 to @glaad.🌈 pic.twitter.com/mecpWaVhzA

“The donation will support the group’s work to improve the lived experience of transgender people,” a press release proclaimed.

But how sincere is this social justice pretty packaging meant for easy American consumption?

One has to wonder if black transgender advocacy is really nothing more than theater for a company haunted by the specter of grisly child labor allegations against it in Africa.

Gender-neutral M&M’s can be similarly seen as a way to hide Mars’ love affair with the communist tyrants in China. Snickers is another Mars product. It’s “You’re Not You When You’re Hungry” advertising slogan doesn’t sound as funny with images in the mind of female Uighur slave laborers toiling away at their garment manufacturing machinery for 14 hours a day, only to be paid in the harsh coin of mass rape and torture.