As it has been for 80 years, M&M’s is still the candy that “melts in your mouth, not in your hands.” But the mascots who peddle the candy in commercials simply weren’t progressive enough for today’s woke society. 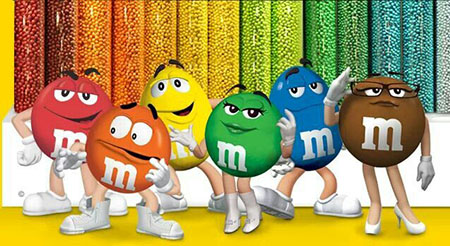 The mascots will now dress and act in more gender-neutral ways, Jane Hwang, global vice president for M&Ms at parent company Mars, told AdWeek in an article published on Thursday.

“We took a deep look at our characters, both inside and out, and have evolved their looks, personalities and backstories to be more representative of the dynamic and progressive world we live in,” Hwang said.

For the female M&M’s characters, Green will now wear sneakers rather than knee-high boots and will “act more confidently,” Hwang said. Brown will wear plainer eyeglasses and more sensible low-block heels instead of stilettos.

Green and Brown will team up as a “force supporting women, together throwing shine and not shade,” Hwang said.

The three male M&M mascots will act in less traditionally masculine ways. AdWeek reported that Red will be less bossy and Orange will “acknowledge and embrace his anxiety.”

Hwang did not say anything about changes to Blue, the laid-back, “cool” M&M who wears only white sneakers and sports catchphrases such as, “Yeah, man.”

She said the company will stop attaching prefixes to the characters’ names, like “Mr. Blue” or “Ms. Brown,” to de-emphasize their distinct genders.

“M&M’s is on a mission right now to create a world where everyone feels they belong,” Hwang said.

Conservative media personality Candace Owens wrote mockingly: “This is a huge win for the oppressed M&Ms.”

Added Lauren Chen, a conservative Christian media personality: “M&Ms are not only fictional, but also literally a rainbow, and yet still they are apparently not diverse enough.”

Laura Bassett, editor-in-chief of the feminist cultural magazine Jezebel, wrote in a tweet: “Losing the voting rights bill and getting woke M&Ms instead feels right.”

M&Ms, which debuted in 1941, were originally named after Mars and Murrie, a reference to candy executives William Murrie and Forrest Mars, the son of Mars founder Frank Mars.