Nobody is wishing harm on anybody. But it may very well be that the only way to protect regular Americans from the scourges of runaway crime, massive unchecked illegal and unassimilable Third World immigration and similar societal woes is for the problem to start hitting the elitist moneyed and political class that encourages these calamities where they live.

Up close and personal. 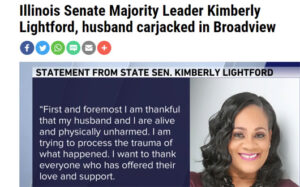 Lightford and her husband Eric McKennie were unharmed, according to a statement from Thomas Mills, chief of the Broadview Police Department.

Mills said, “multiple shots were fired during the incident.”

Lightford’s Mercedes made for a prime target for the criminals Illinois Democrats love to protect:

Chicago and the Cook County suburbs, especially western suburbs like Maywood and Oak Park, have seen a huge spike in carjackings in the past few years, according to police officials.

Carjackers gravitate to expensive SUVs like Lightford’s car, according to the police and interviews the Chicago Sun-Times has had with carjackers.

To no one’s surprise, Lightford has pushed for criminal justice reform as a pillar of the Illinois Legislative Black Caucus, which she chairs.

Another prominent Democrat, U.S. Rep. Mary Gay Scanlon, was also carjacked this week. Here is what radical progressive Philadelphia Mayor Jim Kenney had to say after the brazen broad-daylight incident:

“It’s disheartening, and quite frankly infuriating, that criminals feel emboldened to commit such a reckless crime in the middle of the day in what should be a place of tranquility and peace-one of Philadelphia’s beautiful parks,” Kenney said in a statement.

As the many victims of soaring crime under Kenney’s leftist regime in the City of Brotherly Love might say: Welcome to the party, elected Democrats.

Meanwhile, in California, the chic and the wealthy are resorting to drastic measures as crime hits their swank neighborhoods hard.

From The Hollywood Reporter on Dec. 22:

Private security contractors report that a recent string of high-profile retail robberies and home burglaries in upscale Los Angeles neighborhoods has caused a dramatic uptick in requests for their services and prompted many of their wealthy clients to change their routines out of a mix of caution and fear.

Recent high-profile crimes involving the entertainment community include the Oct. 27 robbery of the Encino home of Real Housewives of Beverly Hills star Dorit Kemsley, resulting in the theft of $1 million in luxury handbags, jewelry, watches and other goods.

Actor and former BET host Terrence Jenkins escaped a robbery attempt by a masked crew near his Sherman Oaks home on Nov. 10.

Then Hollywood was shaken by the fatal shooting of 81-year-old philanthropist Jacqueline Avant (wife of legendary music exec Clarence Avant and mother-in-law to Netflix’s Ted Sarandos) during an attempted burglary at her Trousdale Estates home on Dec. 1; the perpetrator, recently paroled from state prison, was charged with her murder on Dec. 6.

America is rapidly turning into Brazil, where a widening divide between the very rich and the poor and a plummeting disrespect for rule of law has caused chaos. As with Brazil, the ultra-wealthy in southern California believe they can wall themselves off from the societal collapse they have done so much to foment:

Estate manager Bryan Peele, president and founder of the L.A.-based Estate Managers Coalition, told THR that his clients have “fully equipped safe rooms that they can live in for a few days, if necessary, that are completely hard-wired with phone cables, Internet, everything.”

One of Peele’s clients has purchased three bullet-proof cars in the last couple of months, while another located a company in London to replicate his luxury watches. “This guy will take a $200,000 Rolex and copy it, using stainless steel and other metals, so it looks like the original but costs maybe $2,000-$3,000 per watch. So, in the event that it’s stolen, the client is out a lot less money,” says Peele.

But these people are also beholden to a certain degree by their insane ideology, which states that “racism” and “xenophobia” are the worst sins a Westerner can commit.

If you recall, Simon died when his luxury livery cab driver crashed the vehicle while driving recklessly in New York City traffic:

Investigators believe Abdul Reshad Fedahi… mistakenly hit the gas instead of the brake after sideswiping a car on the West Side Highway at about 6:45 p.m. Wednesday, law enforcement sources said.

“He hit the gas pedal instead of the brake. He sped up after hitting the car,” a law enforcement source told The New York Post.

“There were no skid marks,” a source said.

Ensuing details about the driver were nothing short of astonishing: Fedahi was “a 44-year-old Afghan immigrant who lives in a homeless shelter.”

Fedahi, who escaped the deadly wreck with two broken legs and a broken arm, somehow survived an apparent suicide attempt back in 2004 when he leaped from the window of a Brooklyn building after his marriage broke up, sources said Thursday….

“He was on a suicide mission,” his cousin, Rauf Sharif, told The New York Daily News. “He dropped himself from a building. I don’t know how many floors in Brooklyn. He went through hard days in his life.”

Fedahi also had his license suspended nine times since November 2011 for failing to show up in court or answer summonses, records show.

Is it really unfair to point out that Simon championed the mass importation of Third World refugees to America in his job with 60 Minutes?

Twelve years ago, 60 Minutes aired a story about Lost Boys from Sudan who fought off unspeakable dangers and then flew off to the United States….

Five years later they walked into a refugee camp in Kenya. That’s where we first met them, when many were hoping to go to the United States. Well 3,000 did, as part of the largest resettlement of its kind in American history. We followed the boys for more than a decade and couldn’t resist revisiting them, to see how they’re doing….

Before their arrival in America in 2001, the Lost Boys of Sudan knew very little about what would be a totally new world for them. For the U.S. government, it was quite a social experiment. America may be a country of immigrants, but it’s not often that the State Department organizes an airlift of people who know virtually nothing about the modern world.

The Lost Boys were sent all over the place from Fargo, N.D., to Phoenix, Ariz. Joseph Taban Rufino landed in Kansas City. Abraham Yel Nhial was sent to Atlanta. We never forgot about them and their fellow Lost Boys and we felt good when it appeared they hadn’t forgotten about us….

Sasha Chanoff, who led those orientation classes back at Kakuma, now runs an organization called RefugePoint which champions refugees in Africa. He still stays in touch with the Lost Boys.

Sasha Chanoff: I would say this is one of the most successful resettlements in U.S. history.

RefugePoint “partners” with many of the most notorious organizations attempting to flood America with Third World refugees, including HIAS, the International Rescue Committee and multiple United Nations agencies.

Eerily, the 60 Minutes piece features a Sudanese refugee getting behind the wheel for the first time as an American teaches him to drive:

This is not meant to be mocking or taunting in the slightest. But perhaps it will cause our pampered elites to consider that double yellow lines don’t protect them from hopelessly unqualified drivers any more than they protect the rest of us. Who thinks of Pierce Corcoran or other average Americans who have been killed by the carnage on our roads due to the madness of allowing Third World foreigners, both legal and illegal, into this nation en masse with no regard for the well-being of the communities they move into?

By all appearances, Bob Simon was the victim of the very American “social experiment” that deposited thousands of “people who know virtually nothing about the modern world” that he celebrated so openly on 60 Minutes?

When ruling progressive elites get violently mugged by the reality they created, WorldTribune.com