The ongoing effort by a rogue administration to surrender U.S. national sovereignty to a new globalist order continues.

The “mandatory funding” would be distributed, over the course of five years, among the Department of Health and Human Services (HHS), the Office of the Assistant Secretary for Preparedness and Response (ASPR), the Centers for Disease Control and Prevention (CDC), the National Institutes of Health (NIH), the Food and Drug Administration (FDA), the Department of State, and the U.S. Agency for International Development (USAID). 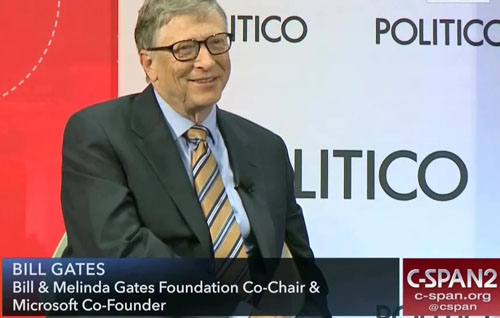 A cool half a billion is earmarked for an international vaccine organization created by Bill Gates and the World Economic Forum:

Of those funds, $500 million would be given to the Coalition for Epidemic Preparedness Innovations (CEPI). This organization, whose motto is “New vaccines for a safer world,” was launched in 2017 by the World Economic Forum (WEF) with the money of the Bill and Melinda Gates Foundation “to finance independent research projects to develop vaccines against emerging infectious diseases.” It comes as no surprise that the Biden administration views it as a major player in its global strategy.

CEPI was founded in Davos by the governments of Norway and India, the Bill & Melinda Gates Foundation, Wellcome, and the World Economic Forum.

The organization was seeded with $98 million in grant money by the Gates Foundation. Gates donated another $20 million in 2020.

This January, the Gates Foundation announced that it was joining with Wellcome, a British charitable foundation founded by a pharmaceutical magnate, to pledge $150 million each to CEPI.

As a news release touting the move made clear, it’s all about the vaccines:

CEPI made early investments in the development of the Oxford-AstraZeneca COVID-19 vaccine, which is now saving lives around the world. Last month, Novavax’s protein-based COVID-19 vaccine — funded largely by CEPI — received [World Health Organization] emergency use listing and is poised to help efforts to control the pandemic globally. More than 1 billion doses of the Novavax vaccine are now available to COVAX, the global initiative co-led by CEPI that aims to deliver equitable access to COVID-19 vaccines. CEPI also continues to work on next-generation COVID-19 vaccines, including “variant-proof” COVID-19 vaccines and shots that could protect against all coronaviruses, potentially removing the threat of future coronavirus pandemics.

“The world must do better at protecting everyone, everywhere against the greatest health threats — from COVID-19 and beyond,” said Melinda French Gates, co-chair of the Gates Foundation. “CEPI’s investments in groundbreaking R&D, commitments to equitable access, and cooperation across the public and private sectors are vital in this effort. We call on global leaders to help CEPI reach its funding target of $3.5 billion.”

The Budget includes $6.5 billion in mandatory funding for the Department of State and USAID to make transformative investments in pandemic and biological threat preparedness globally, which complements ongoing U.S. investments to also strengthen health systems. This includes $4.5 billion in seed funding to establish global, regional, and local capacity through a new financial intermediary fund at the World Bank focused on global health security and pandemic preparedness.

This effort will build on U.S. global health security investments and provide a more structured platform to account for and measure international gaps and gains. It will also accelerate U.S. leadership to bring other donors to the table and will provide $500 million over five years to the Coalition for Epidemic Preparedness Innovations (CEPI) to support innovating science and technological capabilities to shorten the cycle for development of safe, effective, and affordable vaccines.

Make no mistake. Funding CEPI is a giant step in helping to construct a dominant world health authority.

In the face of a global threat, no single country, organization or agency can go it alone.

There is now a strong global consensus on the need for an enhanced global health architecture for pandemic prevention, preparedness and response, with an empowered and sustainably financed WHO at its core, playing the leading, coordinating and normative role on which so many countries and partners depend.

As you know, WHO’s Member States are now negotiating a new international accord, to establish the rules of the road for a more cohesive and harmonized global response to future epidemics and pandemics – including the equitable sharing of countermeasures.

Ahead of the World Health Assembly in May, WHO’s Member States have tasked me with making a set of proposals on what that architecture should look like.

And it’s clear that a fully funded CEPI, working closely with WHO and other partners, must be part of it.

On March 12, World Tribune documented how this is a cherished goal of the ruling progressive establishment:

Lawrence Gostin is the “faculty director of the O’Neill Institute for National and Global Health Law at Georgetown Law and professor of medicine at Georgetown University….

In a forthright March 1 article for Scientific American magazine, Gostin lays out the argument for ceding one-world health governing powers to WHO:

As the U.N.’s first specialized agency, the WHO has a constitutional mandate to direct and coordinate international health, which includes advancing work to eradicate epidemic disease. No state acting alone can prevent the worldwide spread of infectious diseases. Only robust international institutions can set global norms, promote cooperation and share scientific information needed to respond to disease outbreaks.

Since its launch in 2017, CEPI has forged partnerships with over 30 vaccine developers, manufacturers, and academic institutions. 30 countries, in addition to the European Commission, are now members of our coalition as well as the key philanthropic organizations the Bill & Melinda Gates Foundation and Wellcome Trust. It has also been supported by a number of private organizations.

Jeremy Farrar, director of Wellcome, is incredibly forthcoming about the higher goal behind all this: the implementation of an overarching internationalist order. He wrote for UK newspaper The Telegraph in December 2020:

History shows us, though, that international cooperation – multilateralism – is a difficult thing to sell. So many of its benefits are intangible, invisible, counterfactual, or are taken as credit by national governments who then blame multilateralism for problems and woes.

The concept of multilateralism, of pooling national resources and sovereignty in order to solve problems that no one country can address on its own has been popular with liberals for many decades, but its achievements can sometimes be hard to articulate, less obvious.

And so there has been a backlash. The post-Second World War consensus that international bodies were needed to get nations working together for a common cause has come under fire; Brexit is an example, President Trump’s efforts to distance the United States from NATO and leave the World Health Organization another.

Pandemic hysteria is a means to buttress this globalist order:

The health challenges we face in the 21st century – climate change, environmental degradation, access to clean water, drug-resistant infections – cannot be solved by individual nations. They are not constrained by lines on a map, and so our responses cannot be, either. The signs of a return to a multilateral world are there….

We have stared into the abyss of nationalism over the last few years; a fragmentation of the global order. The pandemic has shown us how ill-advised it is. We cannot shut our nations off from each other; we will never be safe while any country is still fighting the virus. The same is true for a dozen other challenges facing the globe. Perhaps, once again, global catastrophe will teach us the value of multilateralism to bring health and prosperity.

Installed President Joe Biden, who pledged his devotion to globalism before the ultra-elitist Munich Security Conference in February 2021, is using your taxpayer dollars to subsume American sovereignty within the poisoned chalice of global government.