Next up from the New World Health Order: ‘International pandemic prevention treaty’

There was one major fly in the ointment that vexed our ruling elites as they unleashed their otherwise wildly successful coronavirus pandemic coercive social regime on the world two years ago.

Yes, the lockdowns, mask requirements and vaccine mandates thrilled them to no end. But they were all conducted under the auspices of national governments. It likely served as a small sop to the peasants who were deemed not ready to submit to one overarching global health authority.

But make no mistake. Emboldened by their COVID triumph, the ruling establishment, with plentiful corporate sponsors, is already laying the groundwork to bring about its cherished goal of using public health hysteria to help usher in a new international order. 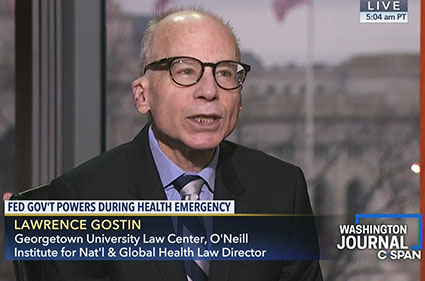 Lawrence Gostin is the “faculty director of the O’Neill Institute for National and Global Health Law at Georgetown Law and professor of medicine at Georgetown University.” He also serves on “high-level advisory committees of the World Health Organization,” his Georgetown bio reads.

Gostin is an enthusiastic advocate for the creation of an international treaty on pandemic prevention that would give WHO binding powers over sovereign nations when the next global health event strikes, as it surely soon will.

In a forthright March 1 article for Scientific American magazine, Gostin lays out the argument for ceding one-world health governing powers to WHO:

As the U.N.’s first specialized agency, the WHO has a constitutional mandate to direct and coordinate international health, which includes advancing work to eradicate epidemic disease. No state acting alone can prevent the worldwide spread of infectious diseases. Only robust international institutions can set global norms, promote cooperation and share scientific information needed to respond to disease outbreaks. As a result, the WHO’s role remains indispensable. With vast and growing global interdependency, intercontinental travel and mass migration, the realities of globalization and climate change have fueled a modern era of new diseases. The list includes three novel coronaviruses—SARS-CoV, MERS-CoV and SARS-CoV-2—and, of course, Ebola and Zika.

Gostin knows who his friends are in this scheme:

WHO director general Tedros Adhanom Ghebreyesus has been the world’s conscience throughout the COVID crisis by urging global cooperation. But his pleas have largely been ignored by nationalistic leaders taking a stance of “my country first.” Global dysfunction reached a pinnacle when President Donald Trump formally announced the U.S.’s intent to withdraw from the WHO. (President Joe Biden reversed this decision on his first day in office.)

Gostin openly states that the coronavirus momentum of the past two years should be seized upon to enhance WHO’s authority throughout the world:

Instead of giving up on the agency, we should use this moment, and what political consensus we have, to prepare the organization for future pandemics—and what remains of the current one.

This goal can be accomplished with robust funding and a bold new international agreement.

As Gostin’s globalist comrades like to say, never let a crisis go to waste:

With crisis comes opportunity, and the new pandemic treaty has the potential to be transformative. It should introduce momentous reforms even beyond giving the WHO power to conduct independent investigations.

All this could be dismissed as mere academic fantasy by a WHO daydreamer, except for one thing. The European Union is on board.

In a March 3 release that deserved far more attention than it received, the EU’s European Council announced that:

The Council adopted a decision to authorize the opening of negotiations for an international agreement on pandemic prevention, preparedness and response. The decision also clears the way for negotiating complementary amendments to the International Health Regulations.

The Council provided background information on the treaty idea’s origins:

The EU gushes of a proposed international treaty:

More specifically, such an instrument can enhance international cooperation in a number of priority areas, such as surveillance, alerts and response, but also in general trust in the international health system.

Gostin served as lead author of a September 2021 paper for The Journal of the American Medical Association that also pushed for a globalist health treaty. It stated:

Georgetown University’s O’Neill Institute, partnering with the Foundation of the National Institutes of Health, is hosting international expert consultations to support the WHO and its member states in the development of an international agreement on pandemic prevention and preparedness.

So we can see our American ruling class is hard at work on the issue as well.

Georgetown is a Deep State-connected American university on a level only reached by Ivy League schools. A search of the Bill & Melinda Gates Foundation funding database reveals a whopping 45 grants issued to Georgetown since 2019.

Wait, it gets more laughable. The new CEO at FNIH is a sitting executive at Big Pharma behemoth Merck:

The FNIH is proud to announce Dr. Julie Gerberding, renowned health advocate, leader at @Merck and @CDCgov and infectious disease expert at @UCSF will start on May 16 as its next CEO and lead the way in advancing biomedical research.

— Foundation for the National Institutes of Health (@FNIH_Org) March 1, 2022

From the attached press release:

The Foundation for the National Institutes of Health (FNIH) today announced the appointment of Dr. Julie Louise Gerberding, the 15th Director of the Centers for Disease Control and Prevention (CDC) and an executive at Merck & Co., Inc., as its next Chief Executive Officer. Dr. Gerberding joins the FNIH Board of Directors on March 1 before assuming the chief executive role on May 16….

It makes sense. FNIH seems to have been designed by Congress to serve as a vehicle for big business coordination with big government:

The FNIH was established by Congress in 1990 as a not-for-profit 501(c)(3) charitable organization. The Foundation began its work in 1996 to facilitate groundbreaking research at the NIH and worldwide. As an independent organization, it raises private funds and creates public private partnerships to support the mission of the NIH — making important discoveries that improve health and save lives.

Like so many before her, Gerberding will retire from the Big Pharma executive suite and head straight into a top position with a prominent health organization that works with the U.S. government.

And just so happens to be pushing an international pandemic prevention treaty that will severely infringe on U.S. sovereignty.