By Larry Ward and Carter Clews

Oddly enough, perhaps the biggest loser in last week’s Republican debacle wasn’t even on the ballot. He didn’t shake a single hand, nuzzle the napes of any newborn babes or promise eager voters pie in the sky or peace on Earth. 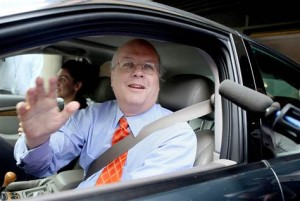 His name was Karl Rove. And all he actually did was squander a staggering $300 million by backing candidates who turned winnable races into laughable routs, producing tepid ads transforming would-be zealots into couch potatoes and firmly establishing himself as the political world’s pre-eminent empty-suit analyst.

Perhaps even worse, he set himself up as the clearinghouse for wealthy conservative donors, hand-picking which candidates and super PACs to support and which to send away empty-handed. He convinced the GOP’s high-dollar donors that he alone was the “almighty architect” — the “Rovitect,” as it were — who could single-handedly end President Obama’s reign.

In so doing, he confirmed, as Bernie Madoff proved, that it is easy to con the wealthy 1 percent out of their fortunes if you claim to be an expert and create your own echo chamber.

The inevitable result? According to the Sunlight Foundation, donors to American Crossroads, Mr. Rove’s super PAC “1 percent,” saw a whopping 1 percent return on their investment.

Take Mr. Rove’s messaging strategy (please). It could best be summed up in a single sentence: “Obama is a swell guy who just doesn’t happen to be up to the job of fixing the economy — so make nice and await the coronation.”

This, of course, was countered by the Obama campaign’s contentious ads claiming that “Mitt Romney killed my wife,” bankrupted the 99 percent to build his evil fortune, and was a misogynist who wanted women barefoot and pregnant in the kitchen. All of which went unanswered by the Rovitect’s pabulum purveyors.

That’s right: Karl Rove and his minions failed to run one hard-hitting ad calling Mr. Obama out on Fast and Furious, Forgerygate, Benghazigate, Obamacare, Russian “flexibility” — or any one of Mr. Obama’s myriad executive orders decimating the Constitution and establishing an imperial presidency.

And there is one more thing the Rovitects did all too well: By persuading the candidates he bankrolled to run from conservative principles rather than on them, Mr. Rove thoroughly alienated evangelicals, Tea Party activists, a legion of young Ron Paulists and just about everyone else who might have provided GOP candidates a decisive edge had they been given even the slightest reason to go to the polls.

Far better was it in Mr. Rove’s tepid, timid world to position his candidates as vacuous automatons mouthing platitudes and avoiding moral imperatives, even if — no, make that as — that flawed strategy drove away millions of hardcore conservative activists who form the base of the Republican Party. In short, for the Rovitects, far better was it to sell out — and lose out, as well.

The bottom line is that the Republican Party cannot afford any more Rove Tuesdays. The further he leads the party away from its core values, the more distant its chances of regaining either its dignity, or its dominance. And the more money he siphons away from worthy conservative organizations that reflect and project the party’s principles, the less chance the GOP has of reactivating its critical base.

Karl Rove, in the words of A.E. Housman, is now numbered among the “runners whom renown outran — and the name died before the man.” The longer he is allowed to remain in the race, the less chance the GOP has of finishing first.

How Karl Rove, Inc. wasted conservative donors’ $300 million added by Editor One on November 16, 2012
View all posts by Editor One →