On May 22, Canadian conservative site Rebel News’s Avi Yemeni politely confronted New York Times Deputy Managing Editor Rebecca Blumenstein at Davos, asking her how her paper could possibly expect to fairly cover the annual World Economic Forum gathering when she herself was an active participant in the affair.

Unsurprisingly, Blumenstein was in no mood to chat.

I just bumped into the @nytimes Deputy Managing Editor, @RBlumenstein, in Davos.

I asked her how is the public supposed to trust the NYT reporting here when she's an INVITED GUEST of the World Economic Forum.

Her response says it all.

There is no other way to put it. This New York Times executive is a working agent of Klaus Schwab’s globalist ruling elite.

Her entire career in big-box “journalism” exemplifies this. Witness her hard-hitting journalism at work:

Blumenstein can be seen in January 2015 interviewing Bill & Melinda Gates for The Wall Street Journal, where she worked before joining The Times. Spoiler alert: Bill and Melinda push vaccines. Hard. Very hard.

And there’s even more fun with Bill Gates at the 2019 Davos gathering. Spoiler alert: He pushes vaccines. Hard. Very hard.

I’m live with @BillGates at the World Economic Forum discussing his work and answering your questions #wef19 https://t.co/NkjEbZFZHA

Well, you get the idea.

Blumenstein is also on the National Welcome Council for Welcome.US. As World Tribune documented in September 2021, Welcome.Us is a Rockefeller-funded pro-migration organization created seemingly overnight as the U.S. pulled out of Afghanistan. It is packed with leading figures in the progressive ruling establishment:

The Rockefellers decided to launch a new mass migration movement into the U.S., and the sheer size of scope of the network constructed is startling….

But right alongside leading progressive globalists such as Cecilia Munoz and Anne-Marie Slaughter you can find the smiling faces of no less than three former Republican governors – Sam Brownback of Kansas, Gary Herbert of Utah and Dirk Kempthorne of Idaho.

Also on board are executives from Airbnb, Microsoft and Walmart, a Roman Catholic cardinal and bishop, the deputy managing editor of The New York Times and a columnist for The Washington Post. 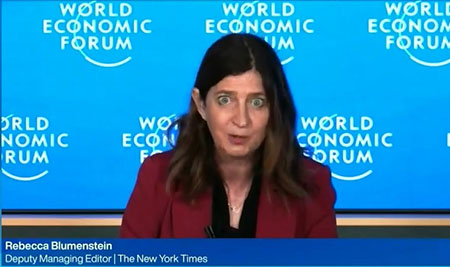 Blumenstein served as China Bureau Chief for the Wall Street Journal from 2005-2009. Stunningly, in a panel discussion for the globalist Aspen Institute in 2018 she bewailed the tragedy to globalization posed by the U.S. standing up to China’s unfair economic practices.

These are her actual words. Blumenstein is horrified at the implications: U.S. goods may be manufactured in the U.S. again!

I think we’re at a worrisome point. The whole notion of globalization and engagement is coming undone between the US and China. We are actually in the middle of a trade war with China, which is shocking. You see the business community, which has supported the Trump administration in many respects, shocked and appalled, because many companies make things that have parts from China and other places, and although the Trump administration is trying to save jobs, there are a lot of fears we could actually lose jobs. We could end up at the end of globalization where you have US goods made in the US and Chinese products made in China. Most people who are realistic about the cost of manufacturing don’t think it’s realistic to bring all these jobs back to the US.

She was on another 2018 Aspen panel with Carlyle Group Co-Chairman David Rubenstein on how corporations can take the lead in promoting societal change.

It is vital to note that this is a key component of Klaus Schwab’s WEF globalist agenda.

In 2019, Blumenstein moderated a panel on “misinformation” at the 2019 Behavioral Science & Policy Association annual conference.

BSPA is an “organization promoting public understanding of how empirically validated insights from behavioral science can provide innovative and effective policy solutions,” its website states. Its members come from the ranks of the ruling elite. Cass Sunstein sits on the group’s Advisory Board.

Who is Cass Sunstein?

Cass Sunstein, who served as administrator of the Office of Information and Regulatory Affairs under President Barack Obama from 2009 to 2012, is best known for touting Nudge Theory. This technique posits that people can be indirectly steered by behavioral suggestion into making personal decisions deemed “right” by those doing the nudging….

[I]n 2010, while serving as Obama’s information czar, Sunstein sought to force political blogs to add pop-up boxes containing opposing arguments on all articles posted. His tyrannical defense for the outrageous proposal was as alarming as the idea itself. “The best would be for this to be done voluntarily,” Sunstein said at the time. “But the word voluntary is a little complicated and people sometimes don’t do what’s best for our society.”

Blumenstein focuses greatly on the climate change racket at WEF. How can she even attempt to portray herself as an objective journalist when she is on the record as stating this?

To show how much of a joke The New York Times is, here is Davos participant Blumenstein in her role as New York Times executive hyping a Times interview with Klaus Schwab in 2020:

Despite an appearance of even-handedness, it goes without saying the article is the furthest thing from hard-hitting:

At a practical level, the sheer concentration of movers and shakers makes Davos an irresistible draw for other movers and shakers. Business and political leaders dice up their schedules into 30-minute increments, cramming in more than a dozen meetings a day with customers, partners, regulators and journalists.

In the evenings, masters of the universe will hop from, say, a dinner hosted by George Soros, the billionaire philanthropist, to a wine party sponsored by Anthony Scaramucci, the financier and former Trump administration official. JPMorgan’s chief executive, Jamie Dimon, is hosting a cocktail reception at a museum. Marc Benioff, the Salesforce co-founder and co-chief executive, will buy out a nightclub and fly in a pop star.

“Six days of work at Davos is easily six months of work in other places for these people,” said Ian Bremmer, the founder of the Eurasia Group, who has worked with the forum over the years. “That intensity is valuable.”

What are we to make of a nation in which the biggest brand names in “journalism” are openly aligned with the forces of ruling establishment they are ostensibly meant to shine a light on?

A free and vibrant press has always been seen as an essential to liberty in America, starting with Samuel Adams in the earliest days of the American Revolution.

A controlled press has always been seen as an essential to tyranny in communist nations, starting with Pravda in the earliest days of the Soviet revolution.

Our ruling elites are constructing the machinery of total societal control right before our very eyes.