The formula: Shamelessly embrace Democrat talking points on would-be “extremism,” thus tacitly endorsing such fantasies, and then utilize the pathetic allegations as “proof” of the non-Swamp outsider’s “unelectability” in a general election. 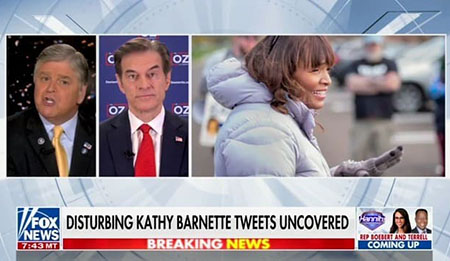 Openly aligned with Oz, Hannity pored through old Barnette tweets critical of Barack Obama, homosexuality and Muslims in an attempt to paint her as some kind of radical nut. That he was practicing this big-box media performative art as an alleged conservative might have been lost on viewers who could be forgiven for failing to distinguish the difference between Fox News and CNN based on the nature of the cheap Woke hysteria involved.

Hannity even smeared supporters of President Trump by portraying Barnette as an insurrectionist for taking part in the Jan. 6 march on the U.S. Capitol that was harnessed by the FBI to foment unrest.

Here’s how establishment news outlet Mediaite reported it on May 16, the day before the primary:

“Kathy Barnette is now facing a massive and evolving scandal over her past beliefs, her past comments, her past tweets, and her actions and inconsistencies that she seems unwilling to answer,” Hannity told viewers on Monday night, before airing a video of Barnette marching to the Capitol on Jan. 6, 2021 before it was stormed by Trump supporters.

“We tried to call her, contact the team, and we can’t make contact at this point. Look at your screen. Here is Barnette marching alongside – this just broke today – radical Proud Boys during January 6. She claims she had no idea who they were and that she didn’t breach the Capitol.”

It would appear that Hannity’s kneecapping worked. Despite clearly having all the momentum in the days leading up to the primary, Barnette finished a distant third to Oz and McCormick, who ended up separated by less than 1,000 votes after mystifyingly attracting more than 800,000 Pennsylvania Republican ballots despite widespread dissatisfaction with the two among the GOP base in the Keystone State.

Hannity’s example is now being followed in Arizona, where Blake Masters has run an ardently anti-establishment campaign. Masters has doggedly questioned the integrity of the 2020 presidential election that saw Joe Biden installed in the White House, and is not afraid of voicing politically incorrect opinions on hot-button issues such as crime and legal and illegal immigration.

Which makes him a perfect target for GOP establishment framing as an “extremist.”

Masters captured the coveted Trump endorsement last week for the Aug. 2 primary, and moneyed rival Jim Lamon is not happy about it.

Lamon is a wealthy businessman who, much like McCormick in Pennsylvania, ran as a vigorous America First candidate who was tough on China despite having extensive business ties to the Asian communist superpower.

Deep-pocketed businessman Jim Lamon spent nearly twice as much as Arizona’s four other Republican candidates for U.S. Senate combined over the first three months of the year, according to the latest campaign finance reports….

Lamon spent $4 million in the first quarter and, with the primary election about four months off, dwarfed his GOP opposition with a $7.2 million war chest.

His rivals combined to spend about $2.2 million in Q1 and had about $4 million in cash on hand through March.

“Now you know who Blake Masters really is,” the ad says.

Where does this come from? As with Hannity, Team Lamon had no qualms about reaching deep in its concerted effort to practice its leftist-flavored “hateful extremist” narrative:

The Lamon campaign appears to be pulling from an investigative piece written by Jewish Insider in April that details an article Masters wrote for a libertarian website back in 2006.

After offering up this weak sauce, Lamon then followed the Hannity playbook to a T by issuing a statement declaring that deranged anti-Semite Masters could not possibly win a general election campaign:

“Blake Masters would be shred to pieces by Mark Kelly and the DC Democrats as someone who has unironically quoted a Nazi, called WWII an unjust war, called the Unabomber one of his intellectual influencers, and shared an article attacking Israel as the North Korea of the Middle East.

This is the new species of Uniparty evolution. Such repulsive behavior within “conservative” ranks is the direct offspring of previous establishment personal attack campaigns that derailed Republican candidates considered “too right wing” for office.

The task is made all the easier by the simple fact that nonprofessional political outsiders, unlike those seemingly groomed for office since birth, are not faceless automatons who have never said or done anything that could possibly be seen as detrimental to a future campaign bid. They are actual humans, with all the strong thoughts and opinions, flaws and quirks that that may encompass.

The regularness of regular people running for office can and is used against them by the permanent political class.

In 2017, Judge Roy Moore was the victim of especially vicious allegations of sexual molestation of minors based on wholly unsubstantiated decades-old accusations.

Republicans in Alabama had made the unforgivable sin of choosing the populist and devout Christian as its nominee for a U.S. Senate seat.

As Jeffrey Kuhner wrote for WorldTribune at the time:

The accusations are nearly 40 years old. There is no evidence — witnesses, pictures, videotape — to corroborate the claims of the victims. It is simply their word against his. Yet, there is a rush to judgment, a media-driven hysteria to convict Moore on all counts without a public trial. He is presumed guilty as sin.

Look who lined up in droves to harshly condemn Moore:

In response, the mainstream media is demanding Moore step aside. Republican leaders, such as Mitch McConnell, Paul Ryan, John McCain, Ted Cruz and Lindsey Graham, insist that the Alabama insurgent drop out.

Kuhner presciently noted five years ago what this was really about:

The establishment is on the verge of destroying Judge Roy Moore.

If they succeed, it establishes the playbook to demolish any Trump populist in the future. They are not interested in the truth — or justice. It’s about blunting the momentum of the America First movement, and preserving the Washington swamp….

This is the real scandal — and it should frighten every American. The corrupt establishment is willing to assault the very pillars of democratic self-government and popular sovereignty. They are telling the voters of Alabama that their ballots — their electoral legitimacy — doesn’t matter; that they don’t matter.

There is a very good reason why Mitt Romney’s favorite word weapon against Donald Trump is “disqualifying.” He doesn’t want to afford Americans the opportunity to decide for themselves on the merits of politically independent candidates.

Party primaries have long been the single most important weapon of Swamp gatekeeping. The establishment cartel does not want non-puppets in Congress or as state governors.

Expect much more of this ugly stigmatizing of change candidates by Republican forces within Republican primaries in the months and years to come. Too many Americans have gotten wise to the fact that defeating the progressive ruling establishment does not start in November.