Guy problem: Trying to buy a razor without funding assault on America

Last week, we pointed out that Procter & Gamble, parent company of Gillette razors, funds a group that helps train abortionists.

Unfortunately, other disposable razor options are caught up in the same vicious cycle of corporate wokeness.

This is not meant to buttress a “eh, what can you do?” attitude but rather to point out again how bizarre the multinational consumer products market is. 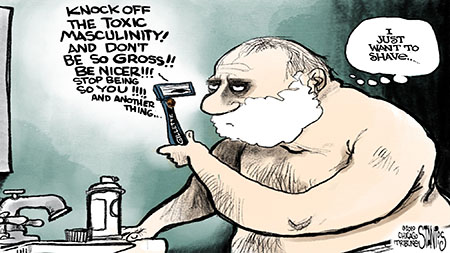 Schick would seem a go-to alternative to Gillette. That is, if Schick wasn’t owned by a multinational conglomerate that is every bit as eager as P&G chief brand officer Marc Pritchard to flash its woke credentials.

Schick is owned by the Edgewell Personal Care Company. In 2021, Edgewell boasted that it had joined the Board Diversity Action Alliance.

The alliance is led by Teneo, the uber-connected Swamp PR firm that was literally hatched within the corrupt embryo of the Clintons “philanthropic” enterprises, and the big-money cultural Marxist Ford Foundation:

About the Board Diversity Action Alliance

Founded in September 2020, The Board Diversity Action Alliance (BDAA) is taking action to increase the representation of racially and ethnically diverse directors on corporate boards. Led by Ursula Burns, Gabrielle Sulzberger, Teneo, The Executive Leadership Council and the Ford Foundation, the Board Diversity Action Alliance is leading the focused and aligned effort to increase awareness, expand influence and drive board-level commitments to support a concerted enterprise transformation approach to diversity.

Since 2020, there has been increased protest not just in the U.S. but across the world against systemic racial injustice, inequity and inequality. While public debate focused initially on law enforcement and government, we believe solutions to the problems of racism and discrimination more generally must be addressed across the whole of society, with business playing a key role….

We were also proud to support those working for a more just and fair world by donating to the National Urban League, in addition to playing our part in the #StopHateForProfit and #StopAAPIHate campaigns, which targeted hate speech and disinformation directly.

The events of 2020 highlighted the deep-seated problems of systemic racism, social injustice and inequities and raised them to the forefront of government, business and society. As a company that deeply believes in the importance of diversity, we were profoundly inspired by the powerful calls for social change and recommitted ourselves to creating a better world by creating a better Edgewell.

Edgewell CEO Rod Little is a budding Pritchard. Here he is in 2020 denouncing speech he doesn’t like and decrying “disinformation” on the Internet:

It has become clear that we must join the boycott of paid advertisement on Facebook and Instagram to ensure that our communities are safe from the spread of hate speech on their platforms. While Mark Zuckerberg’s recently announced changes makes us more hopeful of forthcoming progress, they alone are inadequate in effectively addressing the spread of hate and misinformation.

In 2018, the company initiated a “Schick Hydro Locker Room Talk” campaign featuring NBA star Kevin Love. The “new masculinity” operation chose the name “Locker Room Talk” in a deliberate swipe at President Trump over the infamous Access Hollywood tape, a recorded private conversation that conveniently became a national crisis in the minds of Democrats during the 2016 presidential election.

It’s not surprising that Little served as a global executive for P&G for 17 years, from 1997-2014. The men’s grooming industry seems to be a tight circle, with the big fish gobbling up any would-be major competitors.

A Feb. 22 Business Insider report reveals that the corporation has taken a bath on DSC:

“We have been clear that Dollar Shave Club has not delivered the results we were expecting. The economics of the direct-to-consumer channel changed, and we found it harder to unlock non-razor sales than planned,” Unilever’s press office wrote in a statement to Insider.

Edgewell attempted to buy Harry’s Razors in 2019, only to have the move blocked by the Federal Trade Commission.

That means Harry’s remains independent. It does not mean Harry’s isn’t woke.

Like it’s big-name competitors, the company has pushed the tired “toxic masculinity” narrative. In a transparent attempt to reap maximum PC points, Harry’s featured a “transgender man” in a 2019 commercial:

"Seeing oneself in something as commonplace as a commercial can be taken for granted, but this type of universal representation is a big step for transgender people." 👏

Perhaps looking overseas is the answer. In Oct. 2021 New York magazine ran an article titled “The Best Safety Razors (and Blades), According to Barbers.”

Among the featured items were offerings by a German company, Merkur, a Japanese company, Feather, and an English company, Edwin Jagger.

Feather was listed in a high-price category, but the company has more affordable products available as well. Merkur also is reasonably priced and both are easy to buy online.

Edwin Jagger has partnered with P&G to make its blades usable with Gillette razors.

All this just to get a shave without supporting the destruction of Western Civilization.

We’re all stuck in the same rat maze that is big-box capitalism today. It’s not a purity contest, and the fact that none of us can be 100 percent non-toxic in our purchases does not mean one should not try at all.

Do what you can when you can, and make a stand when you feel you must. It’s more rewarding than you might think. There is a joy that comes with saying “no” to soulless corporations that hate you, a flexing of personal agency that goes beyond any notions of “are we really making a difference in the greater scheme of things?” They’re not getting your dollars, and that is that.

Guy problem: Trying to buy a razor without funding assault on America, WorldTribune.com