In 2021, Big Tech and the Left silenced the lone alternative mass media voice, President Donald J Trump. WorldTribune in 2021 helped Americans correct the record on their own. — The Editors

By all appearances the conclusion is inescapable: American soldiers are now far more likely to die in any military clash with China due to Washington Democrat Gov. Jay Inslee’s avidity for deal-making with the rising communist global superpower.

One word says it all: Rocketry.

“China’s powerful military is considered to be a master at concealing its intentions. But there is no secret about how it plans to destroy American aircraft carriers if rivalry becomes war,” reads the lead sentence in a 2019 Reuters special report titled “New missile gap leaves U.S. scrambling to counter China.” 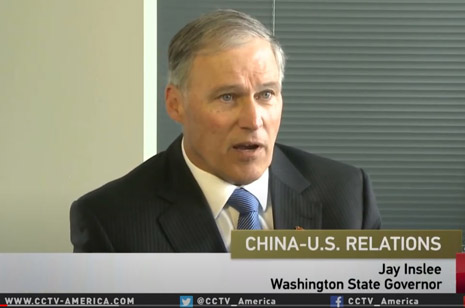 “Under Xi Jinping, Beijing has elevated its missile forces to a point where many rockets in the Chinese arsenal now rival or outperform those of the United States,” the subhead to the report states. “This dramatic shift could render American carriers – the backbone of U.S. military supremacy – obsolete in a conflict with China.”

The Reuters article details how China has greatly boosted the performance capabilities of its ballistic weapons through improved rocket technology:

The Rocket Force has always enjoyed strong support from the ruling Communist Party. But under Xi, the once secretive unit, formerly known as the Second Artillery Corps, has been thrust into the limelight. Since he took power in 2012 with a pledge to rejuvenate China as a great power, the Rocket Force’s latest nuclear and conventional missiles have played a starring role at some of the biggest military parades held in the Communist era.

At the very moment that this extremely ominous development experienced its exponential growth, a high-profile American governor who also ran for the Democrat Party’s 2020 presidential nomination was enticing China to do business in his state by specifically citing the rocket technology he said he had to offer.

Here is Inslee speaking to CGTN, a communist state-owned television broadcaster in 2015 (bold added throughout this column):

“We’re emphasizing the positive by bringing potential venture capital for China to grow businesses here, to create jobs in my state. We’re emphasizing the possible by opening up markets for companies that I have today that provide some high-tech services… we have a company here that provides IT services to Chinese aerospace companies, for instance.”

Asked why Chinese companies should do business in Washington, Inslee replied:

“Because of our great growth in computer science, we now have biotechnology, bioinformatics, aerospace, rocketry, global health, video gaming. And what we’re finding we’re reaching critical mass where those industries are giving you a portfolio of intellectual talent that’s really unsurpassed.”

Inslee was so shameless in his pandering to the authoritarian Asian goliath that he glibly resorted to folksy rhetoric in his interview:

“So if you’re a young entrepreneur in China, you’re looking for a good place to do business and build a new technology company, boy I tell ya, I’d come here and take a really good look at Washington and they can give me a call.”

The astonishing clip can be seen here:

In a Feb. 8 speech, Secretary of State Mike Pompeo warned that China is actively seeking to cultivate U.S. governors and other local officials for the benefit of the regime. He mentioned the National Governors Association by name.

We now know that, as Inslee was eagerly attempting to cut his deals, the communists were feverishly working to create a missile force that could destroy the U.S. military in any clash in the Pacific.

From the Reuters report:

Many of these [new Chinese] missiles are specifically designed to attack the aircraft carriers and bases that form the backbone of U.S. military dominance in the region and which for decades have protected allies including Japan, South Korea and Taiwan.

Across almost all categories of these weapons, based on land, loaded on strike aircraft or deployed on warships and submarines, China’s missiles rival or outperform their counterparts in the armories of the United States and its allies, according to current and former U.S. military officers with knowledge of PLA test launches, Taiwanese and Chinese military analysts, and technical specifications published in China’s state-controlled media.

To sum up then: As U.S. missile performance lagged in comparison, Jay Inslee in his official role as governor was marketing his state’s “high-tech” rocketry technology to a hostile foreign nation that was fully engaged in the process of constructing a war machine designed to crush the armed forces of the United States.

Make no mistake. China knows exactly what a prized possession is has in Inslee. It has even used him to taunt nationalists in the U.S. who support President Donald Trump’s America First foreign policies. A YouTube blurb for a 2017 CGTN “Exclusive Interview” with Inslee brags:

No matter what U.S. President Donald Trump may say or tweet about China, bilateral trade will advance. CGTN’s Wang Guan has interviewed Jay Inslee, Governor of Washington State on China-U.S. trade ties. “Both nations and the (Washington) state have great things happening to our communities. The fact that we can sell Boeing planes and Microsoft softwares and intellectual property to China is great and that has helped,” said Inslee.

Amazing. A Chinese state media outlet is showcasing an American governor as if he were a controlled asset.

Here’s another happy YouTube blurb from the Red Chinese touting their gubernatorial pal as representing an alternative to Americans who would dare challenge them on the foreign stage:

Since Donald Trump took over as U.S. president, he has taken a hard stance against China over trade issues. However, that is not the only voice the country has sent. Washington State Governor Jay Inslee shared a different opinion in an interview with CGTN’s Wang Guan.

Please watch the clips and decide for yourself. Inslee comes across as the epitome of a performing seal for a tyrannical regime. It is an act he has been perfecting over the course of years. In a 2013 interview with the state-controlled newspaper China Daily an oily Inslee bubbled over with praise for the communist despots while discussing an upcoming trade mission trip to China:

Once again, Inslee flagrantly dangled the prospect of providing sensitive U.S. cutting-edge technology to the Chinese:

“We are developing very high-level new technologies in multiple sectors here. It’s not just aerospace, it’s not just software… we want to look for ways to maximize our market opportunities in that regard.”

In a 2013 interview with his TV friends at CGTN, Inslee again went with the down-home approach:

“About two hours ago I was on the streets of downtown Seattle here and a fellow I’ve known in the trade community came up and said, ‘Hey we’re opening a, we have a multi-hundred-million-dollar investment coming from China that we’re gonna announce in a few weeks in the biofuels space’ that will be an investment from China in our biofuels industry opportunities in the state of Washington. So it’s great when you can be walking down a sidewalk and hear about an investment opportunity from China…. We’re excited about that opportunity.”

The tone displayed here is telling, and what it exudes is disgusting. Inslee has no regard whatsoever for the higher interests of the United States; he is merely a businessman plying his trade. A traveling salesman showing his wares. Chopping steaks and bringing home the bacon.

“The threat from China’s new missiles, along with rapidly increasing numbers of PLA navy submarines, means warships from the United States and other foreign navies now patrol hesitantly and infrequently in some key waterways close to the Chinese mainland and Taiwan, according to serving American officials and veterans of U.S. navy operations in Asia,” Reuters revealed in its eye-popping 2019 special report.

“We sell everything from popcorn to airplanes,” a smiling Inslee told the Chinese TV types in 2017.

The U.S. Chamber of Commerce should give him a plaque with those words embossed on it so he can hang it over the mantle in the Evergreen State’s governor’s mansion.

GREATEST HITS, 9: Gov. Jay Inslee offered rocketry tech to China as PLA modernized missile arsenal against U.S. carriers added by Editor One on December 30, 2021
View all posts by Editor One →