Arizona Gov. Ducey to China: ‘Lots of opportunities’ to exploit ‘our defense industry, mining and ores’

The video is shocking. As Americans only begin to wake up to the reality of just how severely compromised their political leaders are by a communist superpower, Arizona Republican Gov. Doug Ducey’s alarmingly frank language resounds like thunderclaps.

“We just had a great meeting with the Chinese Chamber of Commerce just now. And, very exciting, lots of opportunities, including public-private partnerships. I’ve mentioned semiconductors, electronics, aerospace, our defense industry, mining and ores that we do…. So I think from the franchise business to the aerospace and defense business, we would like to do more business with China, with Chinese business people.”

That is Ducey speaking directly to the Chinese state-run media organ China Daily in July 2017. There is no nice way to spin this. An American governor is captured on video offering up this country’s sensitive military technology and natural resources to a communist foreign nation. 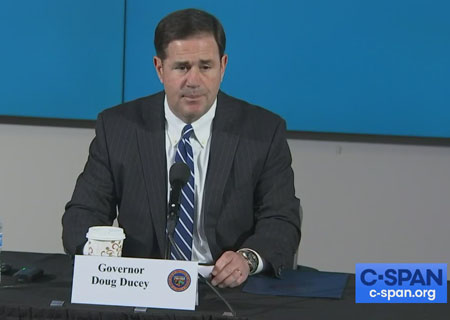 Ducey drew the ire of President Donald Trump when he certified his state’s fraud-riddled election results on Nov. 30. The governor may be no friend of the president, but he is most assuredly considered a pal by China. Ducey has been listed as a “friendly” in a Chinese think tank’s ranking of all 50 governors’ attitudes toward China.

In a Feb. 8 speech, Secretary of State Mike Pompeo warned that China is actively seeking to cultivate U.S. governors and other local officials for the benefit of the regime. He specifically mentioned the National Governors Association by name:

“Last year, I received an invitation to an event that promised to be, quote, ‘an occasion for exclusive deal-making.’ It said, quote, ‘the opportunities for mutually beneficial economic development between China and our individual states [are] tremendous,’ end of quote.

“Deal-making sounds like it might have come from President Trump, but the invitation was actually from a former governor.

“I was being invited to the U.S.-China Governors’ Collaboration Summit.

“It was an event co-hosted by the National Governors Association and something called the Chinese People’s Association For Friendship and Foreign Countries. Sounds pretty harmless.

“What the invitation did not say is that the group – the group I just mentioned – is the public face of the Chinese Communist Party’s official foreign influence agency, the United Front Work Department.”

The China Daily clip reveals that Pompeo might as well have been calling Ducey out personally.

Pompeo also warned in a Dec. 9 address at Georgia Tech that China is “poisoning the well of our higher education institutions for its own ends.” Ducey has rolled out the welcome mat for the Red Chinese on this playing field as well. “We certainly have thousands of your young people in our state’s public universities. We love having them and we want to expand that trade envelope,” he told China Daily.

An article that ran in the Red publication at the same time titled “Arizona looks to sweeten China ties” gives further insight into Ducey’s exceedingly close ties to the Red Chinese. The word “sweeten” is meant to reference Cold Stone Creamery, the ice cream chain that Ducey served as CEO from 1995-2007. From the article (bold added throughout remainder of this column):

The governor of Arizona, a former CEO of an ice cream chain, is looking to scoop up more trade with China.

Doug Ducey, a Republican who was elected governor of the Grand Canyon State in 2014, is the former CEO of Cold Stone Creamery, the ice cream parlor chain headquartered in Scottsdale, Arizona.

By the time he and his business partner sold the company in 2007, the brand had grown from a local shop to more than 1,400 locations in all 50 states and in 10 countries, including China.

“My background is in the private sector. The ice cream company was my business; we opened our first international stores in Shanghai and Beijing,” Ducey told China Daily in an interview on July 13. He spoke on the sidelines of the 2017 National Governors Association (NGA) Summer Meeting in Providence, Rhode Island.

This was not the first time official Chinese sources hailed Ducey’s commitment to China. In April 2016 Chinese Ambassador Cui Tiankai visited Arizona. China’s U.S. Embassy website wrote of the Ice Cream Man’s efforts to sweeten the pot in order to attract Chinese interest in his state:

“Governor Ducey warmly welcomed Ambassador Cui to visit Arizona and said that Arizona always actively involved in promoting and developing the positive relationship with China and did benefit a lot from the fruitful outcomes….

“Arizona will increase investments in scientific and technological innovation, to create an attractive and better business environment for the upcoming Chinese entrepreneurs. Governor Ducey also expressed his hope that both sides could enhance the cooperation on the field of education, tourism and the utilization of water resources.”

Yes, Ducey is keen on selling our nation’s precious water resources to the thirsty Asian giant as well. The more one kicks over this rock, the worse it gets. In 2015 Ducey heralded the opening of an Arizona branch office for Aviage Systems, a joint venture aviation firm between General Electric and Aviation Industry Corporation (AVIC) of China. This was to be Aviage’s first branch located inside the U.S. From an Arizona Commerce Authority release celebrating the occasion:

“I am thrilled to welcome AVIAGE SYSTEMS to Arizona as it makes its first U.S. expansion that will be key to supporting the company’s global growth plans. It’s a partnership that makes sense for many reasons: Arizona ranks as one of the United States’ largest employment areas in aviation and aerospace systems manufacturing,” Governor Doug Ducey said. “We are looking forward to continuing to grow this key sector of our economy, and to helping AVIAGE SYSTEMS grow right alongside us.”

AVIC is controlled by the communist Chinese military. President Trump “is close to issuing a list of 89 Chinese aerospace and other companies that would be unable to access U.S. technology exports due to their military ties,” Reuters reported in November. AVIC would top such a list.

“AVIC is a state-owned conglomerate with 100-plus subsidiaries and more than 450,000 employees. The Trump administration in June put AVIC on a list of companies it said were controlled or owned by China’s People’s Liberation Army. The firm also runs a civilian business that makes airliners and private jets — some built with parts made by joint ventures with American companies.”

An October article in Stars and Stripes chillingly details how AVIC is building China’s war machine:

China put on a spectacular military parade to celebrate the 70th anniversary of Communist Party rule last year, and President Xi Jinping wasn’t the only star of that show.

As Xi and other leaders watched from a Tiananmen Square grandstand, a squadron of fighter jets, attack helicopters, troop transports and surveillance planes roared overhead in a display orchestrated to impress TV viewers at home and warn potential aggressors abroad. The company that made those aircraft: Aviation Industry Corp. of China (AVIC), a state-owned conglomerate with 100-plus subsidiaries and 450,000-plus employees — more than Boeing Co. and Airbus SE combined.

This places Arizona in the position of helping China edge closer to parity with America on military technology. “Works in progress, according to Chinese state media, include a stealth fighter and a seaplane that would be the world’s largest amphibious aircraft,” Stars and Stripes reports. “There is still a gap between where AVIC is and where the U.S. is, but AVIC has been able to slowly narrow that gap,” Tai Ming Cheung, a professor at the University of California San Diego’s School of Global Policy and Strategy, told the U.S. military newspaper.

This is the company that Doug Ducey ecstatically welcomed into his state. Here he is cutting the ribbon on Aviage’s first U.S. office:

In an email from his official Twitter account, Ducey declares that he was “thrilled” to do it:

Now we know why Doug Ducey certified fraud-riddled voting results in his state. Now we can see why he was biting at the chomp to play his part in illegitimately installing China’s “Old Friend” Joe Biden in the White House. Are his fellow Republicans horrified by his actions? Far from it.

Ducey has just been named the new Chairman of the Republican Governors Association.