The Georgia State Elections Board and Secretary of State Brad Raffensperger issued subpoenas on Monday to True the Vote, its founder Catherine Engelbrecht, and its researchers from a company called OPSEC Group LLC seeking evidence that backs up the group’s complaint that as many as 242 people illegally gathered third-party ballots during the November 2020 election and subsequent U.S. Senate races.

Engelbrecht said she was consulting with her lawyers concerning the subpoena. 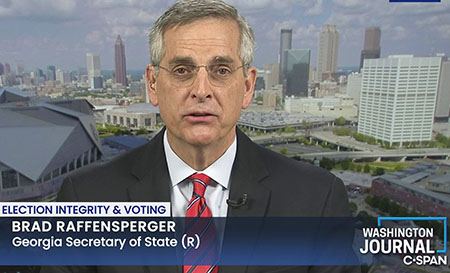 “I can confirm that Secretary Raffensperger is actively investigating allegations of ballot trafficking and voter abuse,” she told Just the News. “The issues his team is tackling are both massive and complex, and investigations like this will take time.”

The intensifying Georgia investigation, which was delayed by elections board changes, comes as Raffensperger faces a close primary election with Trump-backed challenger Jody Hice and as conservative filmmaker Dinesh D’Souza is set to release “2,000 Mules,” which highlights True the Vote’s evidence in a documentary about widespread 2020 ballot trafficking in key states.

Related: Georgia: Jody Hice will run against Raffensperger to fix ‘cracks in the integrity of our elections’, March 23, 2021

The subpoenas indicate that investigators want the identities of any suspected participants in ballot harvesting, including a whistleblower identified only as John Doe who True the Vote claims admitted to gathering ballots for cash.

The subpoenas, signed by acting State Elections Board Chairman Matt Mashburn, also target any information True the Vote and its researchers have about the funding streams for the alleged ballot harvesting scheme.

State investigators are seeking the identities of the “network of non-governmental organizations that worked together to facilitate a ballot trafficking scheme in Georgia” as well as any information about 10 “hubs” True the Vote alleged coordinated the ballot trafficking.

Officials who have been critical of Raffensperger’s tenure as Georgia’s election chief are supportive of the state’s investigation, saying the mass expansion of mail-in votes in 2020 that drove a nearly 1 million-vote increase in Georgia deserves more scrutiny.

“We had a 20%, 25% uptick in the total number of votes cast in this past election,” Georgia Republican Rep. Austin Scott told Just the News. “And so one of the things that came about from that is that you look at a Barack Obama, who got 85,000 absentee ballots, Hillary Clinton got about 100,000, Stacey Abrams got 135,000, and Joe Biden gets 850,000 absentee ballots. And so I think that anybody who would look at those numbers would reasonably agree that we need to know who’s voting in these elections.”

As for Democrats clamoring to end such inquiries, Scott said: “If they didn’t cheat, they shouldn’t be worried about the next election.”

Meanwhile, former President Donald Trump at his rally in Ohio on Saturday evening played the trailer of the documentary “2000 Mules” which reveals a wide scale ballot trafficking network of ballot harvesters across several swing states.

On May 4, Trump will host a premiere at his Palm Beach resort Mar-a-Lago in south Florida. Also, on May 7, there will be a virtual premiere where up to a quarter million can purchase tickets to watch across the country. The film will hit select theaters on May 2.