A group of advocates for audits of the 2020 election in all 50 states are taking aim at elected Republican officials who have quietly aligned with Big Media, Big Tech and the Democrat Party in ignoring massive public support for the audits. 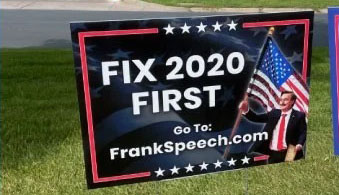 The message is simple: Future elections, including 2022, are compromised or worse until doubts held about 2020 are decisively put to rest. Recent polls show a majority of Americans support audits for all 50 states.

Oltmann noted in a Telegram post: “We can never get out of our own way because the leaders talk the talk and don’t walk the walk. They stick their fingers in the air, test the wind and create the newest Tik Tok video about how ‘cool’ they are.”

The establishment, Oltmann added, “hated President Trump because he outworked them. He held them accountable and he pushed them to perform. They have no focus and about zero ability to finish. Trump did what any CEO or leader should do, he pushed to make them better. I don’t care if we are talking about MTG, Brnovich, or Mickey Mouse. The radical left attacks those who are dogs with bones. They attack those who are relentless and focused. Think I’m wrong?”

We can still fight critical race theory, gender fluidity, the border, the rabid trash in leadership. Here’s how:

The only reason they have infected schools… they stole board seats. Fix the election system and eradicate these voting machines.

The only reason gender fluidity is even a thing and they can recruit and groom our kids is because they stole elections, and those trash representatives implemented their evil deviancy. Fix the elections and eradicate the voting machines.

The only reason they have made our country unsafe and been allowed to erode out border… they stole elections.

FIX THE ELECTIONS AND ERADICATE THE VOTING MACHINE COMPANIES.

Everything we are dealing with is tied to the hijacking of the voice of the American people, over decades. Take it back. Stay focused. Evict the communist enemy within and learn the power of the word NO.

Oltmann listed those advocating for audits in all 50 states:

“And the list goes on! They attack relentlessly those who stay focused yet that focus exposed the massive evidence of fraud and the result is a majority of Americans know the election was stolen,” Oltmann said. “Stay focused. MTG, Boebert, Gaetz, and all those who know what happened and how fraudulent the election was need to focus on the one thing that makes us a great nation… our voice. NOTHING ELSE MATTERS. We fix that, we fix EVERYTHING else.”