Cultural leftism has always been fired more by raw emotion than sober thought, making attempts to point out logic a fool’s errand.

Nevertheless, it is striking that many progressives can clearly see that the massive importation of cheap illegal alien labor into the U.S. is a deeply exploitative practice that causes profound harm to both the abused workers involved and the industries they damage. 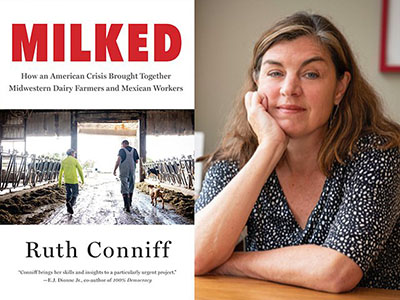 They grasp this, but a bizarre devotion to hazy and poorly considered notions of “racial justice” apparently compel them to promptly turn around and support all that they decry.

The latest example of this phenomenon comes with the publication of a new book by the former editor-in-chief of The Progressive magazine.

“Milked: How an American Crisis Brought Together Midwestern Dairy Farmers and Mexican Workers” is the title and its author, Ruth Conniff, states that the “crisis” comes from an industrial Big Agriculture approach to milking cows that has caused a stark degradation in labor standards on American farms in the name of mass-produced profit.

An interview with the website Civil Eats highlights just how fully aware Conniff is of this development. The site writes:

Dairies employing immigrants produce 79 percent of the U.S. milk supply, according to a 2015 study commissioned by the dairy industry, and eliminating immigrant labor would lead to the closing of more than 7,000 dairy farms. Conniff traces the dairy industry’s dependence on undocumented migrant labor along the same timeline of a rural crisis driven by low milk prices and large-scale consolidation.

Mexican workers answered a labor demand on dairy farms as Midwestern family farmers faced pressure to grow their cow herds in order to compete with mega-dairies. Conniff notes that half of Wisconsin’s dairy farms disappeared in the last decade, but the number of cows—1.2 million—stayed the same.

Conniff describes how dairy farming in the U.S. fell victim to the same big-box business model best exemplified by the plague of retail chain stores that dot endless soulless strip malls all across the country:

There’s a direct relationship in that the farmers who were quickly growing their operations in order to stay in business in the late ‘90s and early 2000s hired workers for the first time ever. Family members had done all the work on the farms until then for most of these guys. Once they began looking for workers, seasonal agricultural laborers from Mexico, who were working on local Christmas tree farms, heard about jobs on dairy farms and came over to do those jobs. They were drawn to the year-round work.

The fact that the farmers had to “get big or get out” and grow their farms is the reason that they started hiring these immigrant laborers. And the reason that those folks were here is partly because they cannot make a living in these little rural towns in Mexico. It’s very hard to find jobs in those towns, and subsistence farmers were being driven off their land.

In other words, the issue of illegal alien labor was never about “the jobs that Americans won’t do.” It was always about destroying a healthy, smaller-scale localized working environment and crafting a vulnerable labor pool that could be treated like serfs in service to the remorseless pursuit of boosting big-business profit margins.

Conniff paints a dismal picture of wronged humanity on both sides of the border:

It was both interesting and surprising to hear the stories of farmers who lived through this seismic change in their lifetime — from little self-sustaining family farms with 30 to 50 cows, to having to grow to stay in business, the pain and regret that people feel about that transition in rural places, and how there is a reflection of that in the pain of people who were driven out of their homes in Mexico and walked across the border to find jobs.

Conniff’s former employer The Progressive, however, ran with an article originally posted at Wisconsin website Isthmus that details her inexplicable positivity towards the large-scale dairy owners of today who are inflicting this very pain:

Some [Mexican workers] have long-standing connections with dairy farmers like John Rosenow, who runs a 1,000-cow operation in Buffalo County. Rosenow, a prominent advocate for the rights of undocumented workers, is a main player in the book. He was part of the first Puentes/Bridges delegation, in 2001, to Veracruz, Mexico, organized by Shaun Duvall, an interpreter in Alma, the Buffalo County seat. While there, he met the wife of one of his workers and their 18-month-old daughter, whom the worker had never met.

“John reached down with his hands the size of milk buckets to shake hands with this tiny girl with tears in his eyes,” recalls Duvall. “They took back pictures of the meeting and plastered them all over the break room at the Rosenow farm.”

What are we supposed to make of this? Is it a feel-good moment? Mega-dairy employer Rosenow gets to hold the daughter of one of his field hands who has been held captive to a labor system that Rosenow personally greatly benefits from to such a degree that he hadn’t laid eyes on her in the 18 months since her birth.

Hey, at least he could gaze at her picture in the break room while earning his $7.25 an hour.

Astonishingly, Conniff is all for furthering this grotesque culture of exploitation. As a (ridiculous) Washington Monthly article on her new book notes:

She suggests changing the current H-2A visa program, which covers agricultural workers. Now, these workers have to return to their home countries within a year. This doesn’t work for dairy farms, which operate around the clock, every day of the year. No farmer can afford to have workers leave for extended periods.

Isthmus labels Rosenow “a prominent advocate” for illegal aliens. WorldTribune documented Rosenow’s advocacy in December. It is remarkably attuned to his own financial well-being:

In the late 1990s, Wisconsin farmer John Rosenow said he was unable to fill open positions with locals. In the back of a farming magazine, he found an advertisement from Amigos Incorporated, a now-defunct organization. The ad described the ease with which American farmers could hire hard-working laborers from Mexico for a fair wage plus one international bus fare for a couple hundred bucks and helping them secure lodging.

“Every time an American quit, I would hire a Mexican. (Hiring) went from one of my biggest headaches to not a headache at all,” he said.

Again, the lie implicit in all this is the notion that Americans won’t do certain unpleasant jobs. In fact, this works in the favor of ruthless employers eager for cheap and exploitable foreign labor.

In 2019, the Center for Immigration Studies reported that employers of manual labor actively try to dissuade native-born Americans for applying for jobs by harping on how horrific the working conditions would be:

A 2014 EEOC lawsuit against Houston-area bakery Lawler Foods stated that the company told non-Hispanic applicants there were no jobs available and “discouraged them with horror stories about the nature of the work,” Richwine reports.

“They told them they’d had to work 14 hours a day in temperatures of minus 10 degrees to over 110 degrees and pushing sacks up to 110 pounds,” Jim Sacher, an attorney for the EEOC, said of the case, the Houston Chronicle reported in 2016.

As a result of the efforts to discourage native-born applicants and develop a Hispanic workforce, “Lawler’s low-skill workforce was less than 1 percent black in an area where blacks were around 30 percent of the population,” [CIS resident scholar Jason] Richwine notes.

Black Americans are being denied a chance for gainful employment in their own communities, and Hispanic newcomers get to work long days in hazardous and dehumanizing conditions. Ain’t diversity grand?

Isthmus summed up Conniff’s book by noting her comments on the widespread weakening of employee bargaining power in Big Corporate-dominated America today:

As it now stands, Conniff notes, “Dairy farmers in the Midwest have been producing themselves right off the farm. Urbanites are also on a frantic treadmill, with productivity increasing and wages flatlining. Mexican workers, trapped on this side of the border making money so they can build their dream homes back in Mexico, are waiting for their real lives to begin again.

“In many ways, we are all in the same boat.”

And the boat is sinking. It begs the question that will not be answered because emotion trumps brain in leftist circles: If you can see all this pain and suffering that a labor system built around mass exploitation brings, why on Earth would you want to continue to feed the beast by supporting the continuous importation of the cheap, vulnerable workers who are the lifeblood that keeps this vicious machine humming?