If the mask had not already been completely lifted on the fictitious conservative standing of globalist free trade “libertarian” organizations such as the Cato Institute, a telling tweet this month has surely sealed the deal.

David Bier is the point man on immigration for Cato, formerly called the Charles Koch Foundation when it was created in 1974. On Jan. 6 Bier outrageously posted the following on Twitter:

I love when Democrats try to disguise their blatant xenophobia with anti-corporate rhetoric https://t.co/rB3C9NWYBq 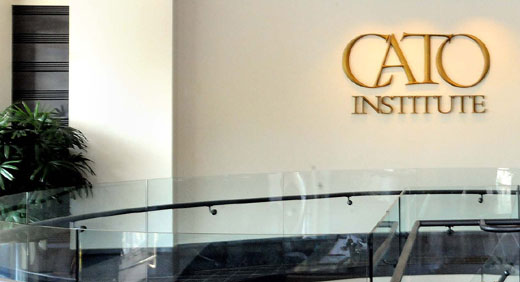 Note the follow-up comments Bier makes. Opposing the outsourcing of American jobs overseas is “anti-foreign bias. And it’s as xenophobic as being anti-immigrant,” Bier asserts.

This is the amoral mindset of a completely untethered “free market” global capitalist system taken to its logical conclusion. The unhinged faux “liberty lovers” at Cato are saying that you are a bigot if you don’t believe a U.S. company should not ship American jobs overseas solely in order to take advantage of the cheaper labor and lesser regard for working conditions and just plain human rights prevalent in more backward nations.

Bier’s repulsive disregard for American workers naturally extends to our society at large. When 32-year-old Kate Steinle was senselessly murdered by an illegal alien in San Francisco in 2017, Bier offered up a wonkish defense of that leftist city’s sanctuary policies towards illegals. He bizarrely tried to frame the deadly act of a deranged man who never should have been in the country as a mental health issue and not an immigration matter.

“When San Francisco released [Juan Francisco] Lopez-Sanchez, he had no history of violence. His earlier convictions were nonviolent drug offenses, and his only offenses in almost two decades were immigration violations,” Bier wrote in April 2017. “While Lopez-Sanchez is a clearly unstable person, he was not a serious criminal. His first conviction was for huffing toxic chemicals. He then attempted to sell heroin and was caught in less than a month. Then he was convicted for selling fake drugs. After each of his last three deportations, he was almost immediately caught at the border. Neither the city nor the federal government had any reasonable basis for concluding that Lopez-Sanchez posed a threat to anyone other than himself.”

In Bier’s world, selling heroin and fake drugs and “huffing chemicals” does not make one a threat to other people, or society. And the fact that a thrice-deported criminal alien is walking around an American city does not in and of itself merit “any reasonable basis” for officials to conclude he would be a danger to the community.

A young American in the prime of her life is dead so that people like Bier can perform these kind of mental gymnastics in order to help large corporations maintain a steady flow of cheap labor.

By now it should be clear that there is nothing “conservative” about an organization like Cato, unless the word means securing a totally unregulated corporate environment free of any moral or basic civil obligations to the people, communities and nations in which companies operate. Further exposing the charade is the cozy financial funding Cato receives from radical progressives, including George Soros, and big-box banking institutions who will greatly benefit from the globalist financial order Cato so eagerly carries water for.

Large banks listed as “institutional” or corporate supporters to Cato in its 2018 annual report include Bank of America, BB&T, SunTrust and Wells Fargo. Listed right alongside these financial titans as an institutional sponsor is the leftist Democracy Fund.

In fact, this organization specifically donated funds to Cato due to its pro-immigration stylings. A “Browse Our Investees” file on the group’s website hails Cato’s “first-of-its-kind survey on immigration.” Under the heading “Why We Invested,” Democracy Fund explains, “[i]n order to have productive conversations about immigration and pluralism, the American people and their leaders need to know where Americans stand on these important issues. CATO’s research will help to create a more productive national narrative and will provide stakeholders across the political spectrum with tools to host constructive dialogues on immigration.”

Amazingly, and surely a total surprise (wink) to the pro-massive immigration Democracy Fund, Cato’s “research” has concluded that immigrants do not pose a criminal threat to Americans at all. “Cato scholars have produced much original research on this topic, finding that illegal and legal immigrants both have lower incarceration rates than native-born Americans and lower criminal conviction rates in the state of Texas, the only state where data are available. We’ve also found that local government participation in immigration enforcement programs doesn’t affect crime rates,” Cato stated in September, 2019.”

Along with Cato, Democracy Fund has “invested” in numerous radical groups that actively support illegal immigration, including key Soros-backed outlets such as Asian Americans Advancing Justice and the National Immigration Law Center.

Democracy Fund also donated $100,000 in 2019 alone to The International Refugee Assistance Project (IRAP), an organization devoted to inundating Western nations with Third World migrants. In its “Why We Invested” explication on IRAP, Democracy Fund noted that the group “shapes thought and practice in the United States and around the globe” to promote the absorption of Third World refugees into sovereign nations.

Democracy Fund has even gone so far as to tip its hat to Soros, citing him as a “mentor” that has helped the organization pursue its progressive philanthropic endeavors.

“We are grateful for the mentorship and ongoing partnership of many foundations who have supported this field for decades, including the Knight Foundation, Carnegie Corporation, Ford Foundation, Open Society Foundations, and Rockefeller Brothers Fund,” the group stated in a Nov. 2018 post on its website titled “Building a Team to Invest in Democracy.” “At such a deeply important moment for our country, we are excited to begin this important work and will continue to share our progress as the team grows and the program develops.”

But not only is Soros connected with an organization that funds Cato… he actually directly funds the group himself. A 2012 Forbes article laughably labels Cato as “conservative” even as it lists Soros’s Open Society Foundations as a donor to the think tank.

Even more alarming is a 2016 Washington Examiner article detailing how Soros recruited Cato to join in an effort to thwart the tracking of illegal aliens in our nation.

“The philanthropic Open Society Foundations run by George Soros sought in 2010 to foster an alliance between civil liberty advocates and proponents of illegal immigration in order to block… language that would have required closer tracking of immigrants, hacked documents reveal,” the Examiner reported.

“The move was made after an off-the-record meeting in November 2009 between representatives of Soros’ organization and groups that included the American Civil Liberties Union, the Human Rights Campaign, the National Immigration Law Center, and the libertarian Cato Institute.”

There you have it. Not only does Cato receive direct funding from George Soros, it actively participates in his nation-destroying operations. And all while fancifully posing as “conservative” merely because it had Republican congressional leaders in its pocket helping to advance its globalist economic agenda.

If the Republican Party is to survive in the years after President Trump leaves office, is must be squarely aligned as the party of working class Americans. That means a decisive divorce from the economic globalists posing as “free market” “conservatives” that inhabit the Koch axis.

Let these partners of George Soros find their true home in the open ranks of the progressive New World Order camp. Protecting Americans economically and through secure borders and vigilant enforcement of our country’s immigration laws is the only path to a meaningful GOP future.