Of the many absurdities that come with championing open borders as a positive development for America’s communities, the degradation of our working environment may perhaps be the most corrosive of all. Afraid of being labeled as bigots opposed to “diversity,” Americans have acquiesced to a return to the harrowing labor conditions horrifically described in Upton Sinclair’s The Jungle back in 1906. 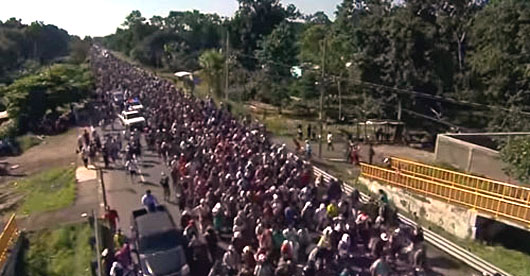 A detailed and informative report published at the Center for Immigration Studies in late October exposes the worst-kept secret in corporate America. Employers of manual labor in this nation are actively discriminating against native-born Americans as they deliberately seek to cultivate a foreign-born workforce that can be more easily exploited into accepting abysmal working conditions in return for low wages.

Jason Richwine effectively documents the ongoing dehumanization of the U.S. low-skilled labor market, referencing actual incidents compiled by the U.S. Equal Employment Opportunity Commission over the past two decades. “A sample of EEOC cases … paints a disturbing picture of how low-skill American workers — typically black, but sometimes white as well — are systematically passed over for manual labor jobs in favor of Hispanics, who are usually foreign-born in the regions where these cases predominate,” Richwine writes.

The most disturbing part of Richwine’s research is the way employers actively seek to prevent native-born Americans from applying for jobs they need by highlighting the miserable working conditions being offered. The devastating double whammy here is that instead of being incentivized to establish a decent and acceptable work environment, companies are actually benefiting off of their abysmal lack of concern for their employees. A hellish work atmosphere discourages native-born Americans from filling the jobs, which then go to desperate immigrants who can barely speak English, if at all, and are ripe for exploitation. It’s a win-win for amoral employers.

A 2014 EEOC lawsuit against Houston-area bakery Lawler Foods stated that the company told non-Hispanic applicants there were no jobs available and “discouraged them with horror stories about the nature of the work,” Richwine reports.

“They told them they’d had to work 14 hours a day in temperatures of minus 10 degrees to over 110 degrees and pushing sacks up to 110 pounds,” Jim Sacher, an attorney for the EEOC, said of the case, the Houston Chronicle reported in 2016.

As a result of the efforts to discourage native-born applicants and develop a Hispanic workforce, “Lawler’s low-skill workforce was less than 1 percent black in an area where blacks were around 30 percent of the population,” Richwine notes.

Black Americans are being denied a chance for gainful employment in their own communities, and Hispanic newcomers get to work long days in hazardous and dehumanizing conditions. Ain’t diversity grand?

Richwine details how Southern Valley Fruit and Vegetable, a Georgia agricultural company, was sued by the EEOC in 2011 for discriminating against American workers in favor of Mexicans during harvesting season. In a news release announcing its lawsuit against parent company Hamilton Growers Inc., the EEOC stated that Southern Valley “provided lesser job opportunities to American workers, which resulted in their earning less pay than their Mexican counterparts, and subjected American workers to different terms and conditions of employment, including less desirable job assignments.”

“The EEOC has reason to believe that the practices alleged in the lawsuit are relatively common in the industry,” Bernice Williams-Kimbrough, district director for the EEOC’s Atlanta District Office, stated in the release.

The agriculture industry is especially fond of hiring foreigners not accustomed to the fair working conditions once taken for granted by Americans. Latino immigrants and refugees are routinely exposed to nightmarish working conditions at the large agribusiness workplaces that dominate the American food pipeline today. The New Yorker’s Michael Grabell reported in 2017 how Case Farms, which operates four chicken processing plants in North Carolina and Ohio, took its Latino specifications even further, preferring to hire Guatemalans because they made for even more desperate workers than impoverished Mexicans.

Grabell cited a comment made by a human resources manager at the company named Norman Beecher to labor historian Leon Fink. “I didn’t want [Mexicans],” Beecher said. “Mexicans will go back home at Christmastime. You’re going to lose them for six weeks. And in the poultry business you can’t afford that. You just can’t do it. But Guatemalans can’t go back home. They’re here as political refugees. If they go back home, they get shot.”

Grabell then listed a litany of horrors Case Farms’ Guatemalan employees were subjected to on the job, including serious physical injury on fast-moving production lines and the fact that workers had to wait so long for bathroom breaks that they wore diapers.

Do Americans who may not need to work on a farm understand that the literal importation of Third World labor standards is destined to redound upon them too eventually? We have been told for decades that chicken processing, meatpacking, and farm work are “jobs that Americans won’t do.” But this corrosion of decent working standards has seeped into the mainstream of U.S. employment in recent years. It was widely reported in 2018 that Amazon, the online retail goliath that employs some 275,000 Americans, now features workers donning diapers to man its assembly lines. A former Amazon warehouse employee told Business Insider of discovering the “awful” and “unmistakable” stench of urine wafting from trashcans. Workers were so terrified of getting in trouble for taking too long of a bathroom break that they were urinating in the trashcans, the ex-employee concluded.

These revelations came at the same time that cities across the nation were pulling out all the stops to court Amazon to locate its “second headquarters” in their locales. The bidding process took on the form of a “sweepstakes” for American cities eager to offer lucrative tax breaks in return for snagging a corporate giant dangling the prospect of 50,000 new jobs over their heads.

Open-borders immigration has crippled the harmony of our neighborhoods and the fabric of our culture in many profound ways. In years to come, more Americans appear destined to personally discover just how destructive the decline in decent working conditions fostered by this societal menace has become.