Democrats in the House signaled they are on board with Team Biden’s unbelievable plan to pay illegal immigrants $450,000 each. The Democrats on Friday blocked legislation that would outlaw such payments. 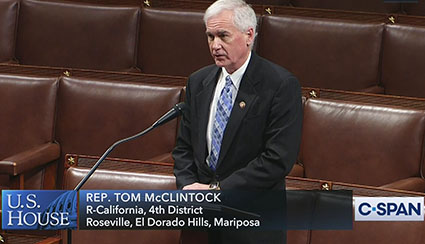 When asked by Fox News Peter Doocy if reports of the $450,000 payouts were really true, Joe Biden heatedly responded: “It’s not true.”

Doocy: So this is a garbage report?

Tucker Carlson on his Nov. 9 show explained what happened next:

Unfortunately, Joe Biden is no longer in charge, he no longer makes meaningful decisions. The ideologues are in charge. The Obama people are in charge. That’s the point. That’s what we’re watching. So after that moment, they hauled Joe Biden before the central committee. They gave him a good reeducation. And the next thing you know, Biden is out there dutifully repeating their lunatic slogans.

McClintock’s legislation had almost 150 co-sponsors. McClintock is ranking member of the House Judiciary Committee’s Subcommittee on Immigration and Citizenship.

There were 221 Democrats who voted Friday evening to block consideration of McClintock’s bill.

Team Biden said it is committed to the payments to families of illegal immigrants who were allegedly separated during the Trump administration.

“Who says crime doesn’t pay? Under Biden it apparently pays very well indeed,” McClintock said upon introducing the bill. “Law-abiding, hardworking Americans have seen their purchasing power decimated by Biden’s economic policies while he has surrendered our southern border. Paying illegal immigrants $450,000 apiece as an apology for Trump’s decision to enforce our immigration law adds insult to injury. Congress has the power of the purse, and that’s why we must act today to stop this outrageous plan in its tracks.”

“With all the challenges Americans are facing every day – including an unprecedented border crisis – providing $450,000 per person settlement payments to illegal immigrants is pure insanity,” said House Republican Leader Kevin McCarthy. “This is not only an insult to the American people, but also will worsen the border crisis and lead to a business boom for drug cartels and human traffickers, who are already exploiting Democrats’ disastrous border policies.”