Gabe Kapler is using the National Anthem as a political prop — again.

Taking advantage of recent high-profile mass shootings in Buffalo and Uvalde, Texas, the San Francisco Giants manager announced May 27 that he would no longer come out on the field for the Anthem until he “feels better about the direction of our country.” 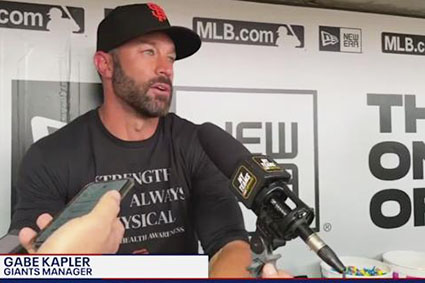 The lazy 24-hour news cycle promptly made this into a “story.” Yet for those paying the slightest attention to Kapler’s antics over the years, it is just the latest example of a self-absorbed Woke attention-seeker’s ongoing quest to flash America with his ill-digested social justice preening.

Kapler was even more radical two years ago during the Summer of George Floyd, basking in the moment to preach endlessly about the dangers of white privilege. Back then, it was about taking the knee during the Anthem ala NFL radical Colin Kaepernick.

In a statement he posted onto Twitter on June 9, 2020, Kapler wrote:

“Racism, sexism, homophobia and examples of privilege and inequality are happening all the time in the baseball environments as well as in society. White men are privileged. White men in leadership positions like the one I hold are more so.”

Note the generous dollop of self-flagellation… what a dopamine rush! A San Francisco Chronicle article one month later reveals Kapler was hooked by the attention he received:

Gabe Kapler realizes and accepts that becoming the first professional manager or head coach to take a knee during the national anthem places him in the spotlight for reasons beyond running a baseball game….

The reaction wasn’t lost on Kapler, who wrote in a lengthy social media post, “Many were supportive. Many others used bigoted language, racist, sexist or homophobic insults or resorted to graphic threats.”

Kapler has been an insufferable boor insistent on inserting his social justice beliefs into the escapist world of professional sports for years. His act is about as fresh and welcome as that of finger-wagging NBA head coaches Gregg Popovich of the San Antonio Spurs or Steve Kerr of the Golden State Warriors.

“I will work to amplify the voices of Black people, people of color and marginalized groups, I will work to equalize opportunities for Black people and others who have not had the same access and who continue to be discriminated against, and I will work for a more just society. I will call out injustice when I see it. I reject hatred and bigotry in all forms.”

Later that month, Kapler appeared on a program called “Race in America: A Candid Conversation” on NBC Sports Bay Area.

Assuming a deeply awkward posture of submissive humility before his black interviewers, Kapler lectured white people on their need to embrace being “embarrassed” about their privilege and to get educated about “systemic racism” in America by reading copious amounts of racially correct literature and listening to podcasts:

To further pursue his culturally leftist agenda, Kapler has created his own foundation, which he calls “Pipeline For Change.” From that group’s mission statement:

The Pipeline for Change Foundation is a California based non-profit organization that was created to provide resources and remove obstacles for BIPOC, women, non-binary people and members of the LGBTQ+ community to participate in all aspects of collegiate and professional sports.

We are committed to building an environment where every facet of the game is filled with diverse decision-makers – leading to a richer and more representative game and a more just society.

Kapler’s vision of social justice in the world of sports is noxious in the extreme. Here is his foundation praising the male University of Pennsylvania swimmer who has made a mockery of women’s athletic competition:

For #WomensHistoryMonth we want to shine light on trailblazers that have contributed in the push for change in more than just sports. This Friday we are giving a special shoutout to Penn standout, Lia Thomas! Read about Lia at the link below! ⬇️ https://t.co/bU7r5I2VhK pic.twitter.com/3pB4gWaBxg

Gee, it’s funny how the big-box media fawning all over him doesn’t report this rabid side of Kapler’s Woke sports ideology.

How can families help support transgender children?
Read below to learn about 2️⃣ ways to best support and love these children! #Diversity | #Inclusion pic.twitter.com/vMeV6ixWW3

Here are 4️⃣ awesome books for Trans or Gender Nonconforming kids and their families to read this month!!
Let us know what you think! 📚🎓 #Diversity | #Inclusion pic.twitter.com/Kbn9nRIzJl

Kapler’s Wokeism frequently exhibits a markedly childish nature, filled with the simplistic messaging one would expect of an affluent baseball manager who was radicalized by podcasts:

The term "Work twice as hard" is popular in marginalized communities because of the uphill battles they face daily for just a chance.

When you add equity in spaces to equality, you can see how every person's difference is actually a benefit to us all! #Diversity #Inclusion pic.twitter.com/irsDYRbA3w

One way to best support those from different cultural backgrounds is to shine visibility on 'casual racism'.

Someone experiencing these comments might just laugh them off, even if they feel uncomfortable. It's our job to stop racism in all forms!#Diversity | #Inclusion pic.twitter.com/C8oOY4wpe5

Above all, Kapler comes across as a college-aged hipster striving to be fashionable. In December, establishment media ally NBC Sports Bay Area captured his take on Critical Race Theory being taught in public schools in a juvenile manner equally humiliating to both news outlet and subject:

Kapler doesn’t use the phrase “Critical Race Theory,” but his message clearly targets the segment of society railing against frank conversation on the topic.

“Anytime you have teachers that are a little fearful that they might say or do the wrong thing, you have a paralyzed individual.”

It’s hard to fathom that these paragraphs are aimed at grown adults:

Where Kapler really gets passionate is when he is asked to speculate on the motivation for any politician or school administrator to mandate that teachers offer lessons that replace facts with a sanitized version.

“To be quite blunt, it’s because truth is uncomfortable for people,” he says. “It forces folks to examine their part in that truth. And I think that scares the s–t out of people.

“There’s so much responsibility to go around that the guilt probably makes people push it away, sweep it under the rug, act like it doesn’t exist, instead of confronting it head on.”

The utilization of professional and big-time collegiate sports as a weapon to advance Cultural Marxism is no joke. Sports are indeed a potent armament in the progressive ruling establishment’s arsenal.

But Gabe Kapler himself is quite laughable. The only proper response to his look-at-me Woke Bro gyrations is to chuckle, mock and dismiss him as the lightweight inanity that he is.