Trump in Texas on ‘American Gulag’ prisoners: ‘We will treat them fairly’

Former President Donald Trump said on Saturday that, if he decides to run and if he wins in 2024, the Jan. 6 prisoners currently being held in what has become known as the “American Gulag” could be pardoned. 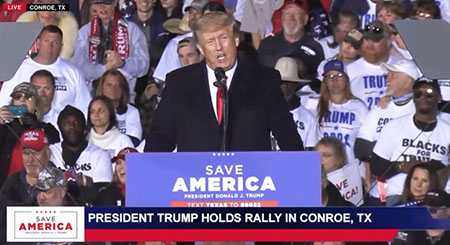 “We will treat those people from Jan. 6 fairly,” Trump told the massive crowd at a rally in Conroe, Texas.

“We will treat them fairly. And if it requires pardons, we will give them pardons, because they are being treated so unfairly,” Trump said. “This hasn’t happened to all of the other atrocities that took place recently. Nothing like this has happened. What that ‘unselect’ committee is doing and what the people are doing that are running those prisons, it’s a disgrace. It’s a disgrace. We will treat them fairly, and we will take care of the people of this country. All of the people of this country.”

Trump promised the crowd in Conroe that, together, they would “take back the White House.”

Trump in Texas on ‘American Gulag’ prisoners: ‘We will treat them fairly’ added by Editor Two on January 30, 2022
View all posts by Editor Two →