Swamp lie: Merrick Garland is a humble and devoted servant to the rule of law

Why does our ruling establishment insist on clinging to narratives that have overwhelmingly proven not to be true?

The answer may be as simple as: for the pure power flex involved. 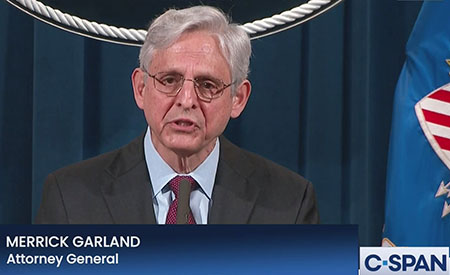 Merrick Garland has been touted as a “moderate” by Democrats all his professional life, dating back to his years hunting “domestic extremists” for Waco mass murderer Janet Reno in the Bill Clinton Justice Department of the 1990s.

This alleged “dispassionate balance” was trotted out once again when he was nominated for the U.S. Supreme Court by lame-duck President Barack Obama in 2016. Remarkably, it is still being persistently dusted off after a year of Garland presiding over an unprecedented air of Justice Department hostility towards regular Americans who happen to be Trump supporters or just parents worried about what their local schools are teaching their children.

Biden administration Attorney General Garland marked his one-year anniversary in office last week, and a dutiful big-box media was there to say what anyone who has been paying the least bit of attention the past year fully knows is demonstrably false.

For whatever strange reason, The Wall Street Journal led the way. Here is its deliberately inaccurate – no other conclusion makes sense – lead:

A growing docket of politically fraught cases is confronting Attorney General Merrick Garland as he marks his first year in office, challenging his efforts to keep the Justice Department out of the partisan battles that dogged his predecessors.

To the WSJ, Garland is a cool and sober-minded change from the “combative” antagonisms of the Trump years:

Mr. Garland’s deliberative leadership style, honed over more than two decades on the bench, stands in contrast to the more combative approach of his most immediate predecessor, William Barr. As Mr. Trump’s second attorney general, Mr. Barr at times openly criticized career prosecutors and undermined their work, actions he said were designed to correct what he saw as overreach. He is currently promoting his newly released book detailing the ways Mr. Trump pressured him.

Isn’t it odd for The Journal’s Justice Department reporter to tweet things like this about the central figure of the beat she is supposed to be rigorously covering?

On the eve of his 1-year anniversary Garland recalls first walking into Main Justice as a 26-year-old with one task: “To do the right thing and pursue justice. I still feel that way and I hope you do, too.” pic.twitter.com/FXRPQ7dlxj

Sadie Gurman touts her status as an Associated Press alumnus. She appears to have brought every bit of that discredited wire service’s style of loaded reporting to the WSJ. Forced to acknowledge Garland’s stunning attempt to portray concerned parents criticizing school board members as potential terrorist threats, she did so in the most benign manner possible:

Republicans also argue that Mr. Garland politicized the department by issuing an October memo instructing the Federal Bureau of Investigation to help local officials address threats to school board members, which he said was aimed at stopping violence against school staff but Republicans call an effort to silence parents who speak out at meetings….

Mr. Garland has said he wouldn’t be moved by criticism. President Biden selected the former federal judge in part because he believed he would establish confidence in the Justice Department’s independence after years in which Mr. Trump repeatedly pressured his attorneys general to prosecute political rivals, show leniency to associates and discredit the 2020 presidential-election results.

Gurman totally leaves out the fact that Garland’s approach against American moms and dads was so inimical that his department was later forced to orchestrate an embarrassing public climb down. A leftist education group tried to jump on the PR grenade on his behalf, apologizing for writing a letter blamed for triggering the entire affair.

All this is ignored by Gurman for very good reason. Garland’s Justice Department was captured transparently carrying water for a progressive establishment agenda by leaping into action entirely at the behest of a radical organization.

But the Wall Street Journal wasn’t alone in propping up the soggy notion of Garland as an apolitical devotee of the rule of law. Bloomberg Law could not restrain itself in saluting him as a model of “restraint” and staunch professionalism:

Garland has largely stayed out of the public spotlight, rarely discussing the department’s investigation into the Jan. 6 insurrection and other fallout from Donald Trump’s presidency.

Restraint and what one former senior DOJ official described as a detached management style come naturally to Garland, who spent the previous 24 years cloistered half a mile up Pennsylvania Avenue as a federal appeals court judge.

The word cloistered is used to paint one of the ruling establishment’s favorite myths: that of the tireless civil servant who is only dedicated to serving the American people:

Garland’s even-keeled focus on upholding norms — without overtly discussing the conditions he inherited — has some civil servants feeling relieved they can enforce the law free of political distraction, according to interviews with dozens of current and former department employees.

“They’re professionals, no matter who is in office, and they do their job professionally and deserve respect for that,” said James Cole, who was deputy attorney general from 2011-2015. “Merrick is helping in that regard by saying, ‘we’re not a political organization, and I’m going to back you up in upholding rule of law.’”

Yes, let’s take a look at this “even-keeled” personality. Garland told taxpayer-funded progressive propaganda outlet NPR last week of his department’s obsession to reinforce Democrats’ Jan. 6 hysteria, which has caused numerous Trump supporters to languish in jail for more than a year as they await sentencing in show trials while New York Times reporters laugh in private table talk about how “fun” it was to over-exaggerate the events of that day for maximum partisan advantage:

Every FBI office, almost every U.S. attorney’s office in the country is working on this matter. We’ve issued thousands of subpoenas, seized and examined thousands of electronic devices, examined terabytes of data, thousands of hours of videos. People are working every day, 24/7, and are fully aware of how important this is. This had to do with the interference with the peaceful transfer of power from one administration to another. And it doesn’t get more important than that.

“Those involved must be held accountable, and there is no higher priority for us at the Department of Justice,” Garland promised as the one-year anniversary of Jan. 6 approached.

This is Janet Reno talking, not a cloistered monk dedicated to humble federal duty.

Garland goes on to detail his Justice Department’s commitment to fighting “hate crimes” and defending “voting rights,” two other areas in which his hyper-politicized department can be utilized to bolster Democrat interests.

When the party’s abortion wing was up in arms over Texas’s new heartbeat bill, which outlaws abortion after a fetal heartbeat can be detected, Garland once again sprang into immediate action, filing a Justice Department lawsuit against the state.

In what is his proven go-to approach to all divisive issues, Garland cast pro-lifers as potential domestic terrorists as he vowed to do whatever he could to fight the new law:

“The department will provide support from federal law enforcement when an abortion clinic or reproductive health center is under attack. We have reached out to U.S. Attorneys’ Offices and FBI field offices in Texas and across the country to discuss our enforcement authorities,” the statement explained.

“The department has consistently obtained criminal and civil remedies for violations of the [Freedom of Access to Clinic Entrances] Act since it was signed into law in 1994, and it will continue to do so now,” it added.

Garland’s vow came less than a week after the Texas law took effect.

Be they pro-lifers, Trump supporters or concerned parents, all who oppose the Democrats’ agenda are portrayed as violent extremists in waiting by Janet Reno’s former sidekick. This is what makes Merrick Garland so especially dangerous, and it explains why the ruling establishment is so eager to craft its hollow narrative of him. Like his predecessor in the Obama administration Eric Holder, Garland is meant to serve as the instrument of brute strength against all opponents of the Swamp status quo.

Bloomberg Law gives this away tellingly, expressing how Garland’s job is to build back Swamp norms that had come under fire from the populist surge of an outsider president:

The vast majority of DOJ employees will never be involved in the department’s ongoing work prosecuting the Capitol insurrectionists, former Trump strategist Steve Bannon, and — potentially — the former president himself.

Still, to some, their sense of mission is shaped by Garland’s actions on that front. For instance, some current and former career attorneys said they were heartened by his January speech directed at DOJ staff in which Garland said he’s “committed to holding all Jan. 6 perpetrators, at any level, accountable under law.”

One of those current lawyers, however, expressed fear that Garland’s “old-school DOJ” nature may not be ideal for the hyper-partisan times. The current attorney said that while the culture is back to normal for now, not enough is being done to look back and learn on past transgressions, which could expose them to peril if Trump were to be elected again in 2024.

This is what gets you regaled as a model of professional decorum and personal restraint in Washington, D.C. today.

Swamp Lie that won’t die: Progressive henchman Merrick Garland is humble and devoted servant to the rule of law, WorldTribune.com