A New York Times reporter contradicted his own published words by telling Project Veritas that “a ton of FBI informants” were “amongst the people who attacked the Capitol” on Jan. 6, 2021. 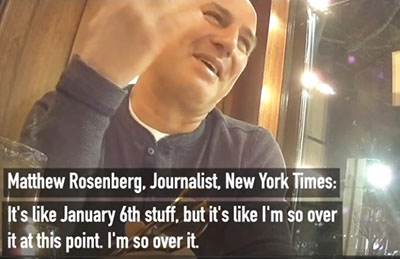 In another contradiction of his own reporting, Rosenberg told an undercover Project Veritas reporter that Jan. 6 was “no big deal.” He wrote for the NY Times that the events of that day amounted to “the next big lie.”

“It’s not a big deal as they [media] are making it, because they were making too big a deal. They were making this an organized thing that it wasn’t,” Rosenberg says in video posted by Project Veritas on March 8. He would go on to say that the Left’s reaction to Jan. 6 was “over the top.”

Rosenberg also revealed that Jan. 6 was “fun,” a contradiction to his reporting that it was “a violent interruption to the transition of power in American history.”

Rosenberg says in the video: “It was like, me and two other colleagues who were there outside and we were just having fun.”

He even appears to make fun of his New York Times colleagues in one soundbite, saying: “I know I’m supposed to be traumatized, but like, all these colleagues who were in the [Capitol] building, and are like, ‘Oh my God it was so scary!’ I’m like, ‘f*ck off!’ ” He adds: “I’m like come on, it’s not the kind place I can tell someone to man up but I kind of want to be like, ‘dude come on, you were not in any danger.’ ”

Rosenberg concludes: “These f*cking little dweebs who keep going on about their trauma. Shut the f*ck up. They’re f*cking b*tches.”