The Supreme Court on Friday sent the question of the legality of abortion back to the states as it eliminated the constitutional right to an abortion by overruling the 1973 Roe v Wade decision.

The 5-4 decision marked “a defining moment for a Supreme Court that is more conservative than it has been in many decades, a shift in legal thinking made possible after President Donald Trump placed three justices on the court. Two of them succeeded justices who voted to affirm abortion rights,” the Wall Street Journal’s Brent Kendall noted.

“This is following the Constitution, and giving rights back when they should have been given long ago,” Trump told Fox News. “I think, in the end, this is something that will work out for everybody.”

When asked whether he feels he played a role in the reversal of Roe v Wade, after having appointed three conservative justices to the high court, Trump told Fox News: “God made the decision.” 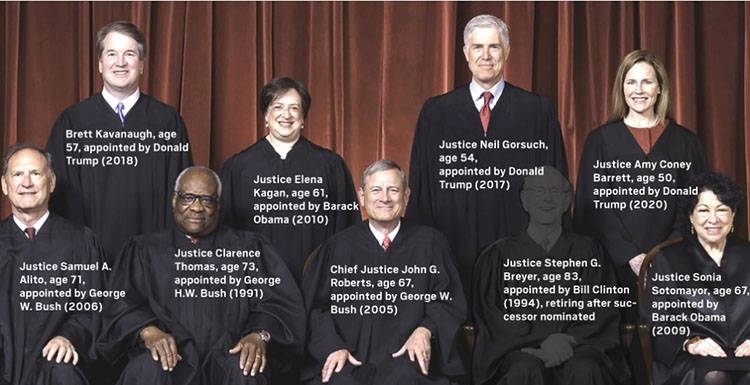 “Today’s historic Supreme Court decision does not mark the end of the near half-century fight for life; it correctly returns this issue to the people’s elected representatives in each of the states. The hopes of future generations now rest within the purview of lawmakers, who will decide whether America will continue spiraling down the Left’s extreme path of taxpayer-funded, on-demand abortion up until the moment of birth or a path of compassion, support, and care for both the lives involved in this difficult issue — the mother and the baby — and fulfilling the Founders’ vision of a country that cherishes everyone’s inalienable right to LIFE, liberty, and the pursuit of happiness.

“It should also be noted that this historic day for democracy, nearly 50 years in the making, would not have been possible without the leadership and commitment to life of President Donald J. Trump. Thank you, Mr. President!”

The court’s decision in Dobbs v Jackson Women’s Health Organization upheld a law from Mississippi that bans abortion after 15 weeks of pregnancy, roughly two months earlier than what has been allowed under Supreme Court precedent dating back to Roe v Wade.

The ruling gives states broad latitude to regulate or prohibit abortion as they see fit.

Within an hour of the Supreme Court’s decision, Missouri ended abortion in the state.

🚨 BREAKING 🚨 Following the SCOTUS ruling overturning Roe v. Wade, Missouri has just become the first in the country to effectively end abortion with our AG opinion signed moments ago. This is a monumental day for the sanctity of life. pic.twitter.com/Jphy72R4rq

Other states which have so-called “trigger laws” banning most abortions that will take effect immediately or within weeks of Roe v Wade being overturned include Arkansas, Idaho, Kentucky, Louisiana, Mississippi, North Dakota, Oklahoma, South Dakota, Tennessee, Texas, Utah and Wyoming, which just passed its trigger law in April.

Five states – Alabama, Arizona, Michigan, West Virginia and Wisconsin – still have an abortion ban on the books from before Roe v Wade that will go into effect now that the 1973 landmark law is overturned.

Four additional states – Georgia, Iowa, Ohio and South Carolina – all have laws banning abortions after the six-week mark, which were previously ruled unconstitutional but will be revisited now that Roe is overturned.

In addition, Florida, Indiana, Montana and Nebraska appear likely, based on current legislative efforts, to move to ban or severely restrict abortions now that Roe is overturned.

Several states have vowed to become sanctuary states for abortion access, including California, New York, New Jersey, Connecticut and Colorado. Many states already have abortion on demand, such as Oregon, up to the third trimester.

“This is a day to celebrate life! Five Supreme Court justices today stood strong in support of the Constitution by overturning Roe. Now states can again extend the protection of law to the precious lives of unborn human beings. Americans will mourn the tens of millions human beings lost to abortion on demand under the Roe regime. But Americans will soon rejoice for the millions who will live thanks to Roe being thrown into the dustbin of history.

“Justice Alito’s opinion is one for the ages and simply holds: ‘It is time to heed the Constitution and return the issue of abortion to the people’s elected representatives’ and ‘procuring an abortion is not a fundamental constitutional right because such a right has no basis in the Constitution’s text or in our Nation’s history.’ The decision affirmed Roe was egregiously wrong and was an abusive exercise of ‘raw judicial power.’ Today’s decision begins to undo Roe’s damage to our nation.”

Judicial Watch filed an amicus curiae brief with the Supreme Court in the Dobbs case in support of the constitutionality of Mississippi’s Gestational Age Act and overturning Roe v Wade. The brief argued that the Constitution and Bill of Rights exist to protect the federalist system and sovereignty of the states on these matters:

“Our Founding Fathers very carefully crafted the Constitution and Bill of Rights to protect the individual sovereignty of the states. The resulting principles of federalism purposefully guided the jurisprudence of this country for more than 150 years, maintaining fairly clear spheres of federal and state power…. Abortion policy began in the states where the people used the democratic process to voice their moral, religious, and scientific opinions. Roe needlessly wrenched abortion policy from the states and, relying on ‘penumbras formed by emanations,’ seven unelected judges created a brand-new constitutional right to abortion. The response was immediate and lasting and after 48 years, strong opposition to Roe and its progeny remain.”