Barack Obama is being presented as America’s first gay president by Newsweek, which glorifies his decision to recognize same-sex marriage.

The Newsweek cover story will serve a purpose other than generating interest in a magazine that has been losing circulation and advertising revenue if it is viewed as an opportunity to finally discuss the taboo subject of Obama’s communist mentor, Frank Marshall Davis. This controversial figure, who drank heavily and smoked dope, wrote a pornographic novel in which the author declared, “under certain circumstances I am bisexual,” and discussed having sex with a young girl named “Anne.”

Despite Obama’s ABC News interview, where he claimed coming around on the issue in part because of conversations about homosexuals with his young daughters, Davis is the key to understanding Obama. Davis influenced Obama from ages 10 to 18, his critical growing-up years in Hawaii. Obama admits getting “hard-earned knowledge” from Davis.

The opportunity to finally discuss Davis is also at hand because Washington Post columnist and ombudsman Patrick Pexton, in an effort to justify the paper’s story about Mitt Romney allegedly bullying a kid in high school, notes that the paper’s associate editor and a Pulitzer Prize-winning writer, David Maraniss, wrote “a lengthy piece on Obama’s formative years in Hawaii, including his high school years at the prestigious Punahou School.”

He is clearly suggesting that Obama’s early years have been sufficiently covered by the Post. But note Pexton’s use of the word “lengthy” rather than “accurate” or “complete.” A journalist can write a lot of words without touching on the most relevant facts.

Once again, Pexton has failed in his role as the “ombudsman,” or consumer advocate, for the readers of the Post. He should have taken Maraniss to task for his cover-up of Obama’s communist mentor, Frank Marshall Davis. But Pexton didn’t want to take on one of the paper’s prize-winning journalists for what is clearly one of the most dishonest pieces of journalism ever published about a presidential candidate.

Pexton referred to the 10,000-word Maraniss piece, “Though Obama Had to Leave to Find Himself, It Is Hawaii That Made His Rise Possible,” which was published on August 22, 2008.

Maraniss could have broken the story of Frank Marshall Davis wide open for a public eager to learn everything about Obama. Instead, Maraniss completely ignored the role of Davis, a member of the Soviet-funded Communist Party who was under surveillance by the FBI for 19 years.

The treatment of Davis is important because Maraniss has written a new biography, Barack Obama: The Story, which is being released on June 19. It will undoubtedly be seen by the mainstream media as the definitive word on Obama.

But considering how Maraniss completely omitted Davis’s influence over Obama in that 2008 article, it can be anticipated that the new book will also be a whitewash. One of the early “revelations” from the book is said to be that an Obama girlfriend was actually a “composite” of different people. But Frank Marshall Davis was real, not a composite character.

Remember that Obama had referred to Davis as just “Frank” in his book, Dreams from My Father. We confirmed the story about the identity of “Frank” on February 18, 2008. 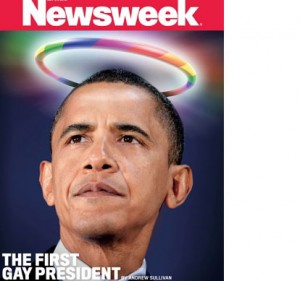 Paul Kengor, author of a new book on Davis, The Communist: Frank Marshall Davis, the Untold Story of Barack Obama’s Mentor, has written a column, “What About Obama’s High School Years?,” in which he criticizes Maraniss for the cover-up of Davis and notes that Obama had mentioned “Frank” by name 22 times in his memoir Dreams from My Father.

Hence, “Frank” obviously had a big impact on Obama, by his own admission, as he was growing up in Hawaii.

In a damage control exercise, the Obama campaign in 2008 acknowledged that “Frank” was Davis, but insisted that he was just a black civil rights activist. In fact, we obtained the 600-page FBI file on Davis and released it in 2008, before the presidential election. Davis was not only a CPUSA member, but engaged in activities considered suspicious by the FBI, such as photographing the Hawaii coast, possibly for espionage purposes. Davis was on the FBI’s “security index” of dangerous people.

Later, we obtained a copy of what has been referred to as a semi-autobiographical pornographic novel written by Davis under a pseudonym and entitled Sex Rebel: Black. The author describes it more directly as a “complete sex autobiography…” It appears that Davis was part of a “free love” movement, someone who by the author’s admission “specialized in sex,” even with children.

Frighteningly, Davis molded Obama’s mind for about eight or nine years. Then Obama went off to Occidental College, where classmate John C. Drew says the future president was already a committed Marxist.

I have examined recently unearthed documents showing that Davis was a teacher at and served on the board of the Abraham Lincoln School, a Communist Party-operated front, in Chicago, before he moved to Hawaii. He was a key party operative.

We pointed out in a September 22, 2008, column, “Lying By Media Knows No Bounds,” that the Post’s Maraniss had ignored Davis in his 10,000-word article and had told me in an email that he did so because he concluded that Obama had “hyped out of all proportion” Davis’s influence over him, and that Davis “did not play a role in really shaping Obama.”

Kengor calls the Maraniss rationale for ignoring Davis “strange,” adding, “Apparently, even Obama’s own words (many of them) on Davis’s influence can be dismissed by reporters who do not want to touch this subject.”

It is apparent that they do not want to touch the subject because, now that “Frank” has been identified as a communist and sex pervert, the information will be perceived as hurtful to Obama. Davis’s influence over Obama is a taboo subject and remains so to this day.

Kengor, a professor at Grove City College and author of several books on political figures, gives us a hint of the additional material he has dug up on Obama’s mentor for his new book. He notes, “For decades, he [Davis] wrote the most harsh, outlandish pro-Soviet material you can imagine, with his worst demons being Democrats like Harry Truman and the men in Truman’s administration — George Marshall among them — who opposed Stalin and the Kremlin during the darkest days of the Cold War.”

The obvious relevance of Davis is the influence he exercised over Obama, and the question has to be raised as to whether Obama’s policies in domestic and foreign affairs can now be traced to that influence. As such, it is a much bigger story than a haircut.

But the media’s love affair with Obama, which has been heightened by his embrace of same-sex marriage, means that reporters will go out of their way to ignore Davis. While the major media can be counted on to give Paul Kengor’s new book the silent treatment, the American people have a desire for the straight news about their new “gay president.” It is time for the truth about Davis to come out.

Analysis: Why 4-year media blitz against Trump only elevates him
Read more

Sweden, which never locked down, has not seen spike in new covid cases
Read more