The Salt Lake Tribune is a zombie newspaper now being utilized by a powerful progressive money network to enact radical social change at the local level.

Big-box journalism is already dead. It just doesn’t realize it yet. And all the leftist “philanthropic” money in the world is never going to bring back the public trust that was forfeited long ago. 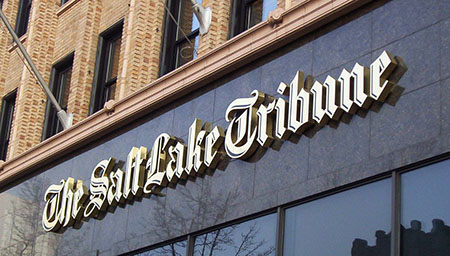 It made waves last month with an outrageous Jan. 15 editorial in which the paper officially called for the state’s National Guard to be deployed to prevent unvaccinated Utahns from stepping outside their homes:

We might have headed off omicron with a herd immunity-level of vaccinations, but that would have required a vaccination mandate, which our leaders refused. Instead, we get, “No one could have seen this coming.” That is patently untrue. They were told what to do, and they refused.

Were Utah a truly civilized place, the governor’s next move would be to find a way to mandate the kind of mass vaccination campaign we should have launched a year ago, going as far as to deploy the National Guard to ensure that people without proof of vaccination would not be allowed, well, anywhere.

The Tribune is another example of the demise of big-box journalism.

Like so many other local dailies, it fell on hard financial times in recent years.

It has survived by going the nonprofit route. Similar to the Texas Tribune.

And just like The Texas Tribune, as WorldTribune has documented, it is severely compromised by its financial “supporters.”

Like many a big-box media organ today, the paper feels it is can dodge this simply by tossing out a disclaimer:

“The executive editor of The Salt Lake Tribune has full editorial control on all stories, columns and photographs published by The Tribune.”

Major 2020 financial support to the newspaper came from:

Never mind the concerns about how the Tribune can possibly be expected to cover Ms. Hilton in an objective manner after she writes out checks on its behalf. The more pressing concern is how it can pretend to cover its Big Tech donors in a neutral way, along with the network of leftist organizations tied to it via other financial backers.

About the Lenfest Institute:

The Lenfest Institute is funded by a major $40 million gift from the late cable giant, Gerry Lenfest, and it has also received funding from the Knight Foundation, Facebook, and Google.

The Knight Foundation is a frequent collaborator of notorious leftist “philanthropic” powerhouse organizations such as the Ford Foundation and George Soros’s Open Society Foundations.

H.F. “Gerry” Lenfest purchased The Philadelphia Inquirer and donated it to the Lenfest Institute for Journalism, placing Philadelphia at the epicenter of a national effort to protect and transform local news in the digital age. The Inquirer is now the largest newspapers in the United States operated as a public-benefit corporation, under the non-profit ownership of the Institute, dedicated solely to the mission of preserving local journalism nationwide. The Inquirer serves as a live lab for the Institute’s innovation investments.

Leftist partners surround the institute, including Democracy Fund, Facebook, Google and, yes, even the Texas Tribune:

The Democracy Fund participates in one of the most notable efforts to fund left-of-center newsgathering. The Knight Foundation began funding the Institute for Nonprofit News (a membership group of left-of-center media outlets including the Center for Responsive Politics, Mother Jones, the Nation Institute’s Investigative Fund, Grist, and ProPublica, among others) in 2016 through the “NewsMatch” program. In 2017, Democracy Fund and the MacArthur Foundation each pledged up to $1 million to support NewsMatch. Nonprofit Quarterly reported that Democracy Fund had “coordinated” the expansion of NewsMatch in 2017.

In 2016, Politifact announced that Democracy Fund had pledged $500,000 over a two-year period to expand Politifact’s operations. In October 2016, during the height of the 2016 Presidential election, Politifact apparently wrongly classified reporting by a conservative-leaning news website on a partly Omidyar Network-funded Clinton Foundation program as inaccurate. Politifact initially denied receiving funding from Omidyar groups (which include Democracy Fund) when questioned about its report.

From a Jan. 22, 2021 article in the Lenfest Institute newsletter titled “Defend the Truth”:

In his Inaugural Address on Wednesday, President Joe Biden spoke of the importance of truth.

All of us have a “duty and responsibility” to “defend the truth and to defeat the lies,” Biden said.

That responsibility is core to our work at The Lenfest Institute. No matter your politics, our democracy depends on a common truth and a shared commitment to facts. Our sole purpose is to help news organizations develop revenue models and utilize technology so they can produce essential journalism in service of our communities and our democracy.

Here’s how the “no matter your politics, we need a common truth” plays out a mere four paragraphs later:

Between the Inauguration, former President Donald Trump’s second impeachment, and the insurrection it’s been a busy few weeks in Washington. Catch up on how The Philadelphia Inquirer covered these historic moments.

And, with that in mind, here’s the “impartial” and “objective” Tribune in action.

The following is a straight news article on a Western Conservative Action Network conference in October from the newspaper’s “political reporter”:

A conspiracy and religion-fueled political conference in downtown Salt Lake City drew about 1,000 attendees on Friday to the Salt Palace Convention Center. People there heard from some of the leading far-right political figures, including retired Army Lt. Gen. Michael Flynn and former Overstock.com CEO Patrick Byrne.

Again, this is not an opinion columnist in action:

The Western Conservative Action Network, or WeCANact event, was billed as a place to learn to fight “against the socialist, communist, and Marxist ideologies” in government, schools and the media. The event did focus on that promise, but also offered up a large helping of misinformation about COVID-19, vaccines and the 2020 election. And, to top off the fringe political buffet, there were lots of references to the QAnon conspiracy theory.

Oh, those far-right lunatics and their COVID denialism:

The falsehoods and half-truths flew fast and furious Friday.

A favorite target for speakers was the COVID-19 pandemic and any protective measures taken to stop the spread of the virus that has killed more than 720,000 Americans.

The attack journalism went on:

Aside from COVID-19, there were other well-worn talking points.

Leigh Dundas, who cheered on the crowd who attacked Congress during the Jan. 6 insurrection at the U.S. Capitol…

There was lots of talk about the nonexistent election fraud, which has fueled former President Donald Trump’s false claims that the election was stolen from him….

Arizona state Senators Wendy Rogers and Sonny Borrelli, who gained notoriety during the partisan-led audit of election results in Maricopa County, were on hand to continue pushing the “big lie” about election fraud.

Nowhere is this bilge poured out by Tribune “political correspondent” Bryan Schott identified as opinion.

Schott labels himself a “marauding journalist” on his Twitter account. Which means he fancies himself as something of a character. This well-won schtick is more in keeping with an “edgy” political website than an ostensibly sober-minded daily newspaper. A glimpse at his timeline reveals pure partisanship:

Public commenters warned the digital ID's are the "Mark of the Beast" or the first step on the way to concentration camps #utpol #utleghttps://t.co/6OPcVoZK1H pic.twitter.com/fMGM6uHCyW

Right-wingers have thrown up all sorts of misinformation about this bill.

There are worries a digital driver's license will lead to a vaccine passport or other way to restrict the right to travel.

What organization will oversee this nefarious plot?

The U.N., of course! pic.twitter.com/hBhy6hRF7F

So Schott has a leftist agenda. Fine. That is his right.

But what is extremely tiresome is the attempt to disguise this flagrant bias as outstanding local news coverage.

It is nothing of the sort.

No matter how hard the Salt Lake Tribune’s leftist and Big Tech financial donors try to dress it up as such.