What’s this? Don’t I know what is going on in Russia? The entire world is watching! And here I am recalling oh, God, those horrible events of 1917!

The trouble is that as a result of chasing after what is happening this month, this day, this hour, this minute in a certain country sensationalized at the moment, the news hunters fail to understand (as all news watchers had failed to understand at the time what was going on in the autumn of 1917 in Russia) the tragic nature and gruesome consequences of an event they are witnessing.

History is a living philosophy, and those who “just watch it as it happens” will never understand it. 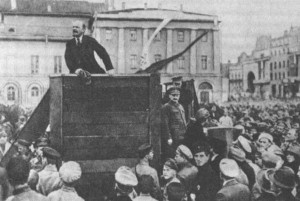 In 1971, D. S. Anin published in Russian (his mother tongue) a 528-page book, entitled “The Revolution of 1917 in Russia Through the Eyes of Its Leaders” (Edizioni Aurora Roma, 1971. Originally published by McGraw-Hill Book Co., New York, 1961). I bought this book in Italy shortly after I and my family emigrated from Russia and were en route to the United States.

Recently I found this book on my bookshelves, re-read it, and am now writing about it, since the book never lost its expediency worth writing about now, to better understand what is presently going on in Russia.

Lenin was, just as was Marx, an idiot. Medical research of the human brain began in the West in the 19th century and is still going on. According to the medical studies, still little known or unknown is the fact that some people are classified as idiots (though the use of the word in medical literature is avoided nowadays as being politically incorrect).

Understandably, some “top political leaders” in the United States are idiots, since inevitably there happen to be many idiots among those who elect them.

The author of the book recalls (page 35): “Typically, at the conference of the Central Committee of the [Bolshevik] Party, only 2 votes were cast for Lenin’s theses; 13 members voted against them, and only one abstained [from the voting].”

“As for non-Bolsheviks, nearly all of them considered Lenin’s recipes ‘ravings of a madman.’ ”

Before 1917, Russia was not a democracy, but a monarchy, and its future would have been a matter of the public discussion and vote.

In Lenin’s Marxist view, the relevance of public opinion to his own theory of what Russia’s future should be like was as absurd and irrelevant (and indeed dangerous!) as would be the opinions and voting of the laymen as to how a certain disease should be treated.

In their writings, Marx, and later Lenin, professed their own views on how the mankind, and Russia in particular, should get rid of all “social diseases.”

What happened to the great Russian literature after 1917? Where are the contemporary Russian Lev Tolstoy, Dostoyevsky, Chekhov, and Blok?

It would be hard to imagine what Russia would have been like a century after 1917 takeover if not for its new owners’ destruction of the great Russian art and invention of the new, Soviet-style pseudo arts and sciences.

After Lenin’s death, the intrusion of those who had grabbed the power in Russia continued in all fields of human endeavor. To emigrate from “Soviet Russia” became impossible. Erelong, no one could publish anything on his own: Soviet “government” publishers kept censoring out any personal creative thought.

The same happened to all arts. Ironically, there appeared the new Soviet mediocrity in all spheres of life — arts and literature were taken over by newly created Soviet hackers. This government-produced mediocrity was sanctioned by those in power and was glorified and generously rewarded by the regime: “The Soviet violins at the world contests sound better than any other!”

Now, after the events of 1917 shook the entire world, the country again faces its unknown future. For a while, with the meteoric rise of Vladimir Putin, the former KGB official of the Soviet secret police, with his “liberal authoritarianism,” there was a short-lived illusion that things might change, that those Western democratic values would take root in the country: people were free to travel, express their opinions, form political parties, and even openly demonstrate their opposition to the regime.

Only very few realized that all those so-called “freedoms” were never guaranteed by the constitution; people had no right to bear arms to defend themselves, and all power rested with the unelected government. Those temporary freedoms were nothing more than erstwhile Soviet-style permissions of the Putin government, which had the final say and the military power to cut short all those permissions at any time. Politically, Putin had introduced tighter controls over parliament and the media and his opponents — moves which are reminiscent of the Soviet era.

And this is exactly what has happened: Putin’s victory last week, which was absolutely predictable to those familiar with the post-Soviet political history of the country, became a fait accompli.

Bolsheviks, D.S. Anin, Lenin died of old age at 53, Marxism, Revisiting the ‘Revolution’ of 1917 to put the Putin of today in context, The Revolution of 1917 in Russia Through the Eyes of Its Leaders, Tolstoy, Vladimir Putin

Revisiting the ‘Revolution’ of 1917 to put the Putin of today in context added by Editor One on March 11, 2012
View all posts by Editor One →