The lead sentence over at CNN.com was typical of most big-box media outlets. “Nicholas Burns, a respected, long-time Foreign Service officer who has served in both Republican and Democratic administrations, has joined former Vice President Joe Biden’s foreign policy team as a formal adviser,” the July 2019 article began.

Note that CNN put the word Republican ahead of Democrat. Serving in the red-tinted Swamp Uniparty administrations of George H.W. and son George W. Bush is apparently grounds for accentuating Burns’ alleged “above the fray” professional credentials. 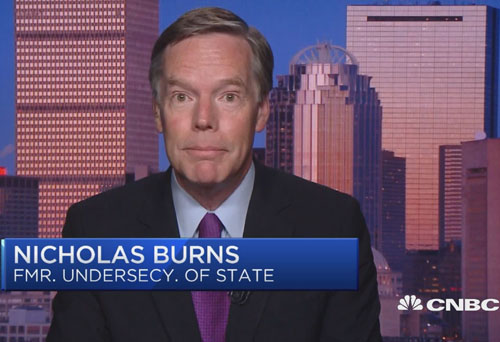 But an examination of the circles this Deep State apparatchik inhabits reveals not only his staunch globalist ties, but the decidedly radical leftist policy goals his elitist network is pursuing. It is fascinating to watch interventionist foreign policy aggression slide seamlessly into an overall leftist agenda. Globalists make excellent cultural progressives and now cultural progressives are well into the process of becoming superb neocons.

Burns began his foreign staffer career in the latter years of the first Reagan administration but first rose to prominence under George H.W. Bush. From 1995-97 he served as a spokesman for the State Department in the Bill Clinton administration. In 1997, in his official role, he vigorously defended George Soros as the progressive globalist billionaire was being accused of yet another currency manipulation scheme, this time in southeast Asia.

Burns called Soros “an honorable individual who’s done a lot of good around the world.”

Burns is a member of the Intelligence Council for Intelligence Squared, a group that claims to be “a nonpartisan, nonprofit… debate series working to restore civility, reasoned analysis, and constructive public discourse to today’s media landscape.”

Another Council member is Jonathan Soros, son of George Soros.

Burns is also on the Advisory Council of National Security Action, a group that states its mission is to advance “a progressive vision of American global leadership.”

“Throughout our country’s history, we have stood as the city on the hill for those fleeing oppression and violence – to shut our doors to refugees would be antithetical to our founding values and an affront to our own history. We must not allow this administration, whose refugee policies are born of xenophobia and bigotry, do just that.”

A July 23 NSA article titled “Human Rights For Some” is a primer on the leftist globalist vision. Among featured points:

• Egged on by his xenophobic senior advisor Stephen Miller, Trump enacted his infamous “Muslim Ban,” which prevented thousands of Muslim refugees and asylum seekers from securing safe haven in the United States.

• Trump’s dangerous “remain in Mexico” policy forces asylum-seekers to stay in Mexico for an indefinite period while awaiting hearings, leaving them stuck in limbo and living in squalid conditions, where they are vulnerable to kidnapping, violence, sexual assault, and disease.

A look at Burns’ colleagues on the NSA Advisory Council speaks volumes. They include:

Adeyemo is also a member of the Board of Trustees for a group known as Demos. This organization is pledged to pursuing a radical progressive agenda on matters such as “economic justice” and various related minority grievance issues. Demos has posted numerous articles on its website advocating slavery reparations for black Americans.

Burns is also on the advisory board of Foreign Policy For America, which is unabashedly championing a far-leftist foreign policy agenda for our nation. The organization’s obligatory Black Lives Matter fealty statement attempts to position the commitment to fight “systemic racism” in America as justification for similarly spreading Cultural Marxist rot around the globe:

“FP4A is committed to doing our part to address structural racism. Our vision for principled American leadership in the world depends fundamentally on our ability to uphold human rights, to earn the esteem of our allies, to empathize with others, and to use power wisely.”

In May, a variety of leftist groups working together released an action paper titled “Toward a Feminist Foreign Policy in the United States.” The paper was released in partnership with several pro-mass immigration and pro-abortion organizations, including NARAL Pro-Choice America and Planned Parenthood. Foreign Policy For America is among the listed “endorsing organizations” of the paper.

Here is just one dizzying excerpt from this insane document:

Feminist foreign policy is the policy of a state that defines its interactions with other states, as well as movements and other non-state actors, in a manner that prioritizes peace, gender equality and environmental integrity; enshrines, promotes, and protects the human rights of all; seeks to disrupt colonial, racist, patriarchal and male-dominated power structures; and allocates significant resources, including research, to achieve that vision.

The authors thank certain “individuals for contributing their time and ideas to inform the following proposals.” Among them are:

This is the network that Nicholas Burns calls home.

Vogelstein is a fellow advisory board member at Foreign Policy For America. She previously served at the Clinton Foundation “as the director of Women’s and Girls’ Programs in the Office of Hillary Rodham Clinton,” her FP4A bio reads. According to her LinkedIn page, she is a current member of Planned Parenthood’s Global Advisory Board.

Other FP4A advisory board members include:

Nazanin Ash – vice president for public policy and advocacy at the International Rescue Committee, a leading organization pushing the Third World invasion of the West.

Joseph Cirincione – president of the left-leaning nuclear non-proliferation group the Ploughshares Fund. Ploughshares was among the “endorsing organizations” of the Feminist Foreign Policy action paper. Cirincione previously served as senior vice president for national security and international policy at the Hillary Clinton-aligned and Soros-funded Center for American Progress. Among its many nefarious works, the Center is a leading promoter of the squelching of free speech on the Internet.

Burns is on the Board of Directors for the Atlantic Council, the globalist think tank that played a leading role in the attempted impeachment coup against President Donald Trump, as we reported.

He is also executive director of the Aspen Strategy Group for the internationalist Aspen Institute, another group we have reported on.

He even used to serve on the Board of the Rockefeller Brothers Fund.

Burns is also intimately honeycombed in the powerful corporate world. The Intercept reported in 2019 that:

According to his Harvard resume, [Burns] is a consultant for Goldman Sachs. His Harvard bio also lists speeches he gave in 2018, some of which he says he was paid for. He spoke to Bank of America, State Street, CitiBank, Honeywell, and a number of other companies, universities, and associations.

It’s a very, very tight and elaborate network and it is all aimed at destroying our country. Take it in. This is what our would-be ruling establishment is desperately trying to return to the levers of power via the doddering campaign of a clearly addled and diminishing-by-the-day Joe Biden.

Nationalists intuitively understand the threat to our sovereignty posed by the forces of globalism but there’s so much more to be found inside that rotten barrel of apples.

If Joe Biden somehow makes it to Nov. 3 and wins, a truly radical progressive foreign policy vision shaped to an astonishing degree by the dark hand of George Soros will slink into the White House along with him.