A CNN anchor misinterpreted the data on a study on the effectiveness of ivermectin as a Covid treatment and then the blue check marked anchor took to Twitter to amplify it, a report said.

After supposedly examining a study posted on the JAMA Network, the anchor, Ana Cabrera tweeted the following:

In a Feb. 18 post on substack.com, Igor Chudov noted the he had seen Cabrera’s tweet and was “sad to hear that ivermectin is not effective, so I decided to give the study a closer look.”

Chudov noted that the study, conducted by medical professionals in Malaysia, included 241 individuals who received 0.4 mg/kg ivermectin for 5 days, which is the FLCCC recommended dose. It also had a 249 person control group who received the standard of care and no ivermectin.

The Covid patients in the study were at-risk persons with comorbidities, most likely to get sick or die:

Design, Setting, and Participants The Ivermectin Treatment Efficacy in COVID-19 High-Risk Patients (I-TECH) study was an open-label randomized clinical trial conducted at 20 public hospitals and a COVID-19 quarantine center in Malaysia between May 31 and October 25, 2021. Within the first week of patients’ symptom onset, the study enrolled patients 50 years and older with laboratory-confirmed COVID-19, comorbidities, and mild to moderate disease.

Interventions Patients were randomized in a 1:1 ratio to receive either oral ivermectin, 0.4 mg/kg body weight daily for 5 days, plus standard of care (n = 241) or standard of care alone (n = 249). The standard of care consisted of symptomatic therapy and monitoring for signs of early deterioration based on clinical findings, laboratory test results, and chest imaging.

After examining the results, Chudov noted: “To my utter shock, the study actually showed that ivermectin DID work.”

The study showed that, for ivermectin vs control group:

“For those versed in statistics, the ‘statistical significance’ of these differences (P) was 0.19 and 0.09. It does not get under the standard of P <= 0.05, so the difference can be called ‘not statistically significant’. But it IS significant to us, and the P values are high because the study was underpowered,” Chudov wrote.

“Clearly, ivermectin showed a positive effect, 3 vs 10 deaths is a huge benefit. The study likely saved about 7 lives by giving ivermectin to 241 people,” Chudov added.

Chudov said he posted the following tweet explaining the numbers from the article, “and you know what happened? Take a look and sorry for my Hunter Biden-level art skills”: 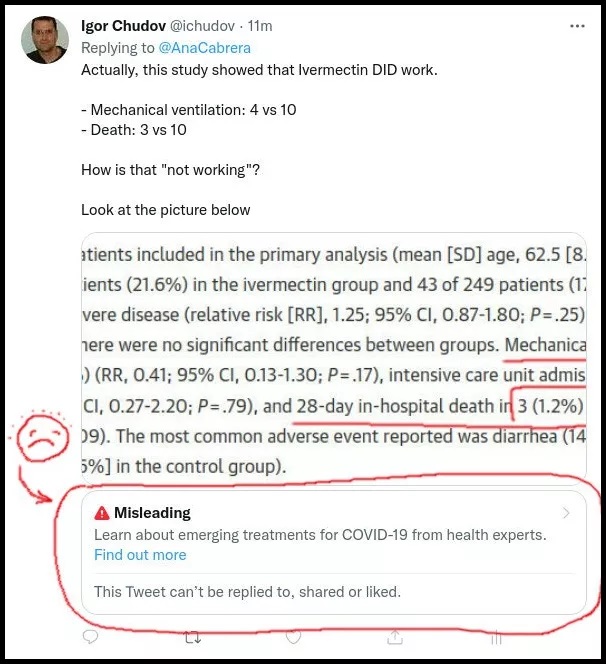 Yes, Twitter slapped the “misleading” mark on Chudov’s tweet which dared to cite actual science which countered the opinion of a Twitter-favored media outlet.

Chudov did not boast about his findings but rather said he was “thankful to the researchers who conducted the study and for saving approximately 7 people from dying by giving them ivermectin.”

Chudov concluded: “An astute reader commented and his thinking about the P-value is the clearest explanation I have ever seen:”

If I understand correctly, “P= .09” means there is a 91% chance that the effect was not by chance. And if there’s a 91% probability that by taking a harmless drug for a few days I can reduce my chance of death by 70%, then how stupid would I be to refuse? The P=.05 cutoff is arbitrary and doesn’t take into account risk vs. benefit, right?