In a report released on April 6, Arizona Attorney General Mark Brnovich did not outright condemn Maricopa County for its handling of the 2020 election, saying instead that there were “questions” about voter identification, ballot handling, and counting which prompted Brnovich to call for a tightening of the rules. 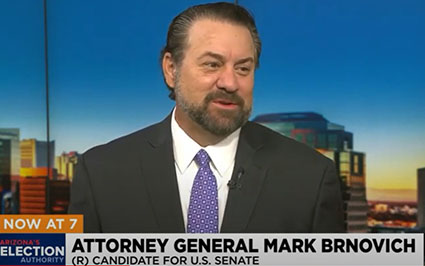 “We can report that there were problematic system-wide issues that relate to early ballot handling and verification,” Brnovich, who is running for U.S. Senate, said.

The report made no mention of voting machines and software or Dr. Shiva Ayyadurai’s extensive study of Maricopa County’s signature verification standards which found an additional 200,000 signature discrepancies.

The AG’s report made no mention of what many have contended were irregularities with voting machines, or pattern recognition specialist Jovan Pulitzer’s investigation finding that one out of every 10 ballots in Maricopa County in the 2020 Election was compromised and can’t be confirmed as the actual ballot cast by the voter.

Brnovich’s report also failed to mention any ballot trafficking discovered by True The Vote and Dinesh D’Souza. The upcoming documentary “2000 Mules” by D’Souza is set to expose what it says was a nationwide operation to rig the 2020 election against President Donald Trump.

6 mths of total silence & then technical excuses on records production don’t get you into the U.S. Senate.

Among the key findings in Brnovich’s report to state Senate President Karen Fann:

• Maricopa officials were not cooperative with his demands for information.
• In many cases, election officials were given less than five seconds to verify voter signatures on file with ballots filed early.
• The number of ballots nullified because of problems dropped even though those filed nearly doubled in 2020.
• There were “multiple violations” in how about 20% of ballots in drop boxes were handled and delivered to election offices.
• Some $8 million in outside funds and grants were used in the vote count, now illegal under a recently passed law. Notably, Facebook’s Mark Zuckerberg and his wife funded more than half of that.

The report revealed that Brnovich may be readying criminal and civil fraud charges against some individuals the attorney general’s Election Integrity Unit (EIU) has investigated.

“The EIU’s review has uncovered instances of election fraud by individuals who have been or will be prosecuted for various election crimes,” said the report on its first page. The investigation is ongoing.