New video footage from Project Veritas show an FDA executive revealing that Joe Biden would like to mandate annual Covid shots for all Americans. 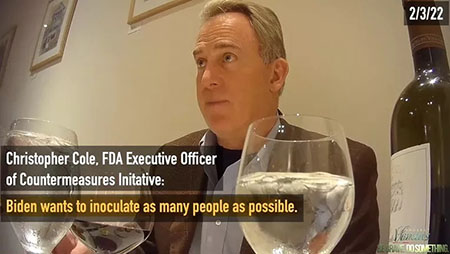 Christopher Cole, the FDA’s Executive Officer of Countermeasures Initiative, says in the video that “Biden wants to inoculate as many people as possible. So, you’ll have to get an annual (Covid-19 vaccine) shot.”

Cole adds: “I mean, it hasn’t been formally announced yet… cause they don’t want to rile everyone up.”

The footage includes Cole commenting on the financial incentives Big Pharma would get if the Covid vaccines were approved for annual usage.

“It’ll be a recurring fountain of revenue. It might not be that much initially, but it’ll be recurring — if they can — if they can get every person required at an annual vaccine, that is a recurring return of money going into their company.”

Project Veritas noted that Cole “brazenly” spoke about the impact that an Emergency Use Authorization has on overcoming the regulatory concerns of mandating vaccines on children.

“They’re all approved under an emergency just because it’s not as impactful as some of the other approvals,” Cole said when asked if he thought there was “really an emergency for kids.”

Cole also said he expects that schools will eventually mandate the Covid jab for attendance.

Project Veritas founder James O’Keefe says in the video introducing Cole: “Meet Christopher Cole an executive officer with the FDA with over 20 years of experience who claims to be involved in the approval process of the various Covid vaccines. What you’re about to witness raises some alarming concerns from the government’s desire to mandate an annual vaccine for everyone, including young children, and the billions of dollars that exchange hands between our government and Big Pharma to railroad the approval process.”