Navarro on the ‘growing national anger’: 3 truths about the 2020-21 assault on America

From the Epilogue of Trump White House adviser Peter Navarro’s book “In Trump Time: My Journal of America’s Plague Year“:

In normal times, following such White House service, I would have been courted by traditional publishing houses such as Simon & Schuster and HarperCollins and have a long list of lucrative speaking engagements. I would likely be on the board of directors of a major corporation or philanthropic institution, helping to guide its strategy. I might also be a research fellow at Harvard or Stanford or a prestigious think tank — even perhaps president of a major academic institution. 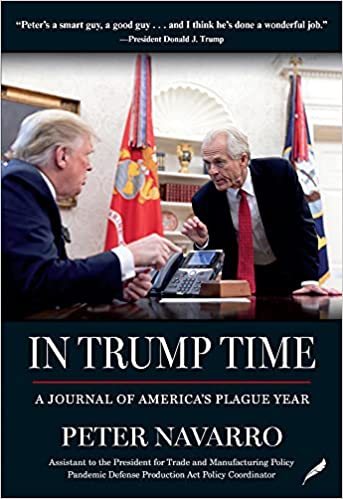 And I most certainly would be a well-compensated analyst for a major television network such as ABC, CNN, or Fox.

But these are not normal times. These are anything but normal times. And in these times of toil and national trouble, rather than being invited to participate in any of the opportunities of post–White House service normally afforded to people of my experience, I have been canceled.

But that’s okay. I have been canceled because I have freely chosen to speak this Big Truth to power:

• Truth One: The November 3, 2020, presidential election was stolen. That’s my view based on my ongoing investigation and emerging evidence, and I continue to believe that a thorough state-by-state forensic audit of the ballots will show that Donald Trump and the more than 74 million Americans who voted for him won the 2020 election.

• Truth Two: The January 6, 2021, violence on Capitol Hill was not instigated by President Trump. POTUS 45 was the very last person to want such violence, precisely because it derailed his best chance to get a full and fair accounting of the flood of illegal ballots cast in the November 3 election. And by no stretch of the imagination was January 6 an insurrection.

Until we as a nation fully confront this Big Truth and get to the bottom of what happened on November 3 and January 6 and in a Wuhan bioweapons lab, we will not be able to move forward either as a fully functioning democracy or as a proud republic.

Unless we confront this Big Truth, we are headed inexorably for massive civil unrest at best and civil war at worst.

Here’s the spark that may ignite America’s prairie fire: the illegitimate Biden regime and the academic, corporate, media, social media, and scientific elites that support this regime have embraced a set of extreme values and policies that are totally out of sync with the cultural, economic, political, and social fabric of the American nation.

To put this problem most simply and succinctly, most Americans who voted in the 2020 presidential election — regardless of their party — did not sign up for what the Biden regime is now delivering.

And please hear me clearly: Main Street USA does not want to live in a world of economic lockdowns, forced vaccinations, and unreasonable mask mandates. Nor do we approve of open borders, the teaching of Critical Race Theory, or the defunding of our police. And we in this broad swath of Middle America strongly oppose profligate spending, crippling taxes, shuttered pipelines, soaring gasoline prices, and skyrocketing inflation.

A triumphant second-term President Trump would have been cracking down on all of this woke progressive madness and fiscal irresponsibility. Instead, the illegitimate Biden regime is enabling it.

As part of our growing national anger, the vast majority of us are also tired of being spoon-fed propaganda disguised as news. And we loathe bearing witness to the canceling and deplatforming of any thought that deviates from the nanny-state, progressive narrative.

CNN, MSNBC, the New York Times, and the Washington Post in particular are working hand in glove with the social media oligarchs running Facebook, Twitter, and Google to desecrate and all but destroy the First Amendment. A second-term President Trump would have had none of that, either.

The only way out of our ideological and partisan cul-de-sac is to turn around and confront the Big Truth now being swept under our national rug.

In Trump Time, Navarro on the ‘growing national anger’: 3 truths about the 2020-21 assault on America, Peter Navarro, WorldTribune.com

Navarro on the ‘growing national anger’: 3 truths about the 2020-21 assault on America added by Editor Two on December 10, 2021
View all posts by Editor Two →