Vice President Mike Pence and others in the inner circle of the Trump White House betrayed the president on his contesting of the 2020 presidential election, former White House adviser Peter Navarro states in his new book.

Like former President Donald Trump, Navarro writes in his book “In Trump Time“, that he firmly believes the election was stolen by the Democrats. 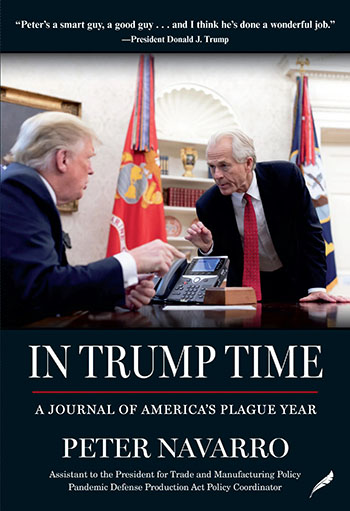 “I can tell you without equivocation that the winner of the 2020 election is not sitting in the White House today — and that should give all of us pause,” Navarro wrote.

Navarro, who served as assistant to the president for trade and manufacturing policy, said he, Trump and former White House strategist Steve Bannon planned a Green Bay Packers-style political “sweep” to challenge Joe Biden’s supposed Electoral College victory. The goal was to send the contested presidential election results from Congress to state legislatures to be decided.

As part of the strategy, Pence was to use his authority as Senate president to put off congressional certification of the election for several weeks so state legislatures could investigate voting irregularities, mainly in how key swing states handled absentee and mail-in ballots.

The effort failed after the events of Jan. 6 at the Capitol, which prompted the evacuation of Pence and other Trump loyalists in Congress. When lawmakers and Pence reassembled late in the day, they quickly certified Biden’s alleged victory.

“Any way you phrase it, Michael Richard Pence will have secured his place in history as the Brutus most responsible both for the final betrayal of President Trump and the unceremonious burial of election integrity,” Navarro wrote.

Pence, who is on a speaking tour which some political pundits say could lead to a 2024 presidential bid, pushed back at Navarro’s contentions.

Pence was asked about Navarro’s book during a Monday night speech in Iowa to the Young America’s Foundation. He responded: “I understand the disappointment in the election. You might remember, I was on the ballot. But you’ve got to be willing to do your duty. And the time may come that some of you are in that position or one like it.”

Pence added: “Everything you’ve recited relative to me is false.”

In the book, Navarro also places blame with White House aide Jared Kushner, Trump‘s son-in-law, for failing to anticipate the legal disputes after the election. Days afterward, “war officially breaks out between the Kushner-led campaign and a team led by the president’s lawyer, Rudy Giuliani,” Navarro stated.

In one White House dining room encounter, Navarro said, several aides urged Trump to announce a run for president in 2024. Navarro told him it was a “dumb idea” because it would signal Trump was conceding that the 2020 election was over.

“What you damn well need to do right now is fight,” Navarro told the president.

Instead, the Trump presidential campaign was “doing its best impression of Gen. George Custer at the Little Big Horn,” he said, noting that $70 million in campaign funds could have been used for legal challenges to Biden’s alleged victory.

Garrett Ziegler, an aide to Navarro, posted a couple of excerpts from the book on Telegram which provide rare insights into the Trump White House following the 2020 election. 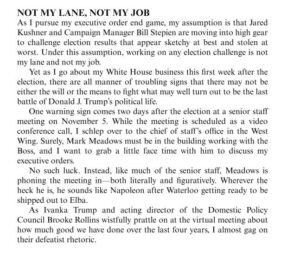 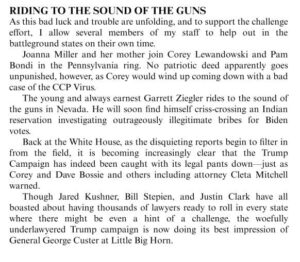