Trump insider Kash Patel drew on his first-hand, in-depth knowledge of Russiagate in an interview with the Washington Exposé podcast. The hosts noted that Patel has been in the Left’s crosshairs ever since helping expose the truth about a narrative that continues to be relentlessly-disseminated after being proved false.

In 2017, then-Deputy Attorney General Rod Rosenstein signed the final surveillance warrant for Trump campaign aide Carter Page. This is a man who, according to Patel, did not know how to run the Department of Justice and even told Patel he did not understand the FISA process.

In May of 2018, Rosenstein responded with a “very personal and very hostile” attack on House Intelligence Committee Chairman Rep. Devin Nunes and chief aid Patel who were requesting records about the FBI’s investigative strategy in Russiagate. 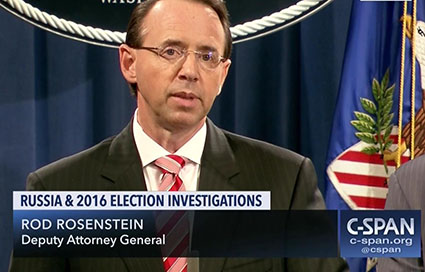 Patel continued: “We had a meeting in the SCIF [Sensitive Compartmented Information Facility], in the House Intelligence Committee space with Devin Nunes, Rod Rosenstein, Christopher Wray, and a bunch of other people to say, ‘Look give us the documents. It’s going to be embarrassing, we think, for the Department of Justice and the FBI. But that’s not a reason to not disclose it’.”

A clearly angered Rosenstein threatened to prosecute those seeking the information.

“You know what Rod Rosenstein did in that meeting?” Patel continued. “He threatened to investigate me and Devin Nunes criminally. And he threatened to subpoena us. I don’t know how this Attorney General thought that was a natural thing you can do to Congress.”

Just as shocking to former prosecutor Patel was the realization that Rosenstein, while serving as the nation’s top law enforcement officer – did not know what a FISA was. “I had to explain it to him,” Patel said.

Where did Rod Rosenstein even come from?

Patel responded: “Rod Rosenstein came from one person, Leonard Leo at the FedSoc, Federalist Society. And look, Leonard Leo gave us a lot of great judges.” But, Patel added, Rosenstein “wasn’t supposed to be the Attorney General, but then the Sessions fiasco happened.”

Attorney General Jeff Sessions recused himself from the Russia investigation and Rosenstein “became the de facto AG, which I think got to his head and … he got scared that he didn’t know how to run the Department of Justice, which he did not,” Patel said. ”


Patel went on to say that Rosenstein “got the sickness that Adam Schiff, Mark Milley and all these other clowns got. They think the mission exists to serve them. And that’s the difference between the 99 percent that I served with and the elitists at the top like Comey and McCabe.”

The New York Post’s David Marcus wrote at the time:

What is becoming completely clear is that the Department of Justice wanted to prevent, then destroy, a Trump presidency. These were not open-minded officials being led by the facts; they were manipulating the facts and hiding exculpatory evidence to bring down Trump and his associates.

And the news media played along like a karaoke machine, making brave heroes of James Comey, Rod Rosenstein and Andrew McCabe, who of course inked a juicy deal with CNN after being fired for lying under oath, something that Democrats usually insist is, you know, a crime. (Michael) Flynn almost went to the slammer for allegedly lying to the FBI. McCabe sits on panels about FISA reform at NYU Law School after his transgression. That really says it all.

Washington Exposé then inquired about the role in the effort to bring down Trump of the “simpering globalist” Fiona Hill, a former official at the U.S. National Security Council specializing in Russian and European affairs who was a key witness in the November 2019 House hearings impeachment inquiry during.

Patel noted: “Here’s facts about Fiona Hill. One, I’ve never met her, spoken to her, talked to her, emailed her, or anything. She would go on to conjure up the Ukraine impeachment fiasco which was another improper way to take down a president. And President Trump was rightfully acquitted. She did that based upon this quid pro quo that didn’t happen. If you want to look at a quid pro quo, maybe look at Joe Biden’s conduct in the Ukraine.”

As for Hill, Patel said that “the reason Fiona Hill is a problem, and John Durham’s highlighting it, is because Fiona Hill, the same Ukraine hoax conjurer, goes and introduces her former research assistant Igor Danchenko, the guy that was just indicted by John Durham, she introduces him to Christopher Steele. She also introduces Igor Danchenko to Charles Dolan, the Hillary Clinton operative.” 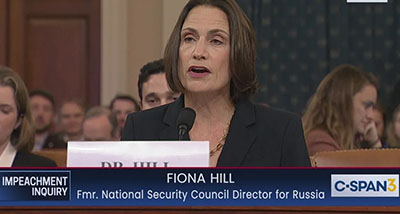 Patel continued: “And here’s the kicker, during the Ukraine impeachment hearing testimony that she gave, and I’ll paraphrase, but it’s out there, she said that she wanted to put on the record for the world that she had no idea about the Steele dossier or what was going into it or how it was being created. Now you and your audience ask yourself this question: The lady that introduced Christopher Steele to his number one source and the lady that introduced Christopher Steele’s number one source to the Hillary Clinton operative cited in John Durham’s indictment, are you really saying that we should believe you had no involvement in the Steele dossier’s production or formation — AFTER you told the world that the President of the United States should be impeached based on false information.

“That’s why I think Fiona Hill has already been put in a grand jury by John Durham. Because she has some serious questions and she’s facing the possibility of lying to Congress under oath for making that statement.”

During the Trump administration, Patel would attain what would be a position he had hoped for, a spot on the National Security Council. Unfortunately, Patel said that “when you get there, you start to see that there’s people like the Fiona Hill’s of the world that are like ‘actually we think’ Rod Rosenstein, Comey, McCabe ‘we’re going to save America from this president.’ And I said ‘wasn’t there just an election, didn’t he get in or am I missing the point here?’ ”

Patel continued: “Some of the deep staters like Gina Haspel, by the way, started to come out quietly. … And who, by the way, was the head of the CIA in London where the Russiagate nonsense started — Gina Haspel. Why do you think she stopped the disclosure of so many documents during the Trump administration? People like that and Rod Rosenstein and Milley ultimately thwarted the president’s priorities because they thought they were actually saving America. They thought they could hijack the presidential election and the democratic process for their own egos. And that’s exactly what they did.”

The reason the deep staters, as of now, “got away with it,” Patel said, “is because of the mainstream media, who are the biggest culprits in this entire process.”

Big Media’s role in Russiagate is why Patel said he started FightWithKash.com: “We’re suing them. We’re clearing people’s names. Their needs to be a coursed corrective measure in the mainstream media and the only way they’ll get that is with a silver bullet to their financial bottom line. And we’re going to deliver it.”