New revelations from Hunter Biden’s “laptop from hell” may show why top U.S. intelligence officials did not want it gaining credence in the weeks before the 2020 presidential election.

Hunter Biden had texted his brother’s widow that China arrested CIA informants in “retaliation” for the U.S. arresting of “my client the chief of intelligence of the people’s republic of China.”

It’s worth stating the obvious: This was written by the son of the current president of the United States.

“You’re right Hallie and I find myself… very alone in dealing with rebuilding an income that can support an enormous alimony and my kids costs and myself, dealing with the aftermath of the abduction and likely assassination (that’s what NYT’s suspects) of my business partner the richest man in the world, the arrest and conviction of my client the chief of intelligence of the people’s republic of China by the US government, the retaliation of the Chinese in the ouster and arrest of US suspected CIA operatives inside China, my suspected involvement in brokering a deal with Vladimir Putin directly for the largest sale of oil gas assets inside Russia to China, a tax bill that Eric left hanging over my business and… And Dads running for president.”

CEFC China Energy Company Limited was the largest private oil and gas company in China when Hunter Biden began doing business with the firm in 2017.

As Hunter Biden explained to his business partner Tony Bobulinski in text messages, he spoke with the Chairman of CEFC China Ye Jianming on a “regular basis” because we have “a standing once a week call as I am also his personal counsel (we signed an attorney client engagement letter) in the U.S.”

Hunter Biden also said he was advising Ye “on a number of his personal issues (staff visas and some more sensitive things).”

All of Hunter Biden’s text messages found on his laptop, including those featured in this article, can be found compiled in a searchable 888-page pdf on Marco Polo’s website. 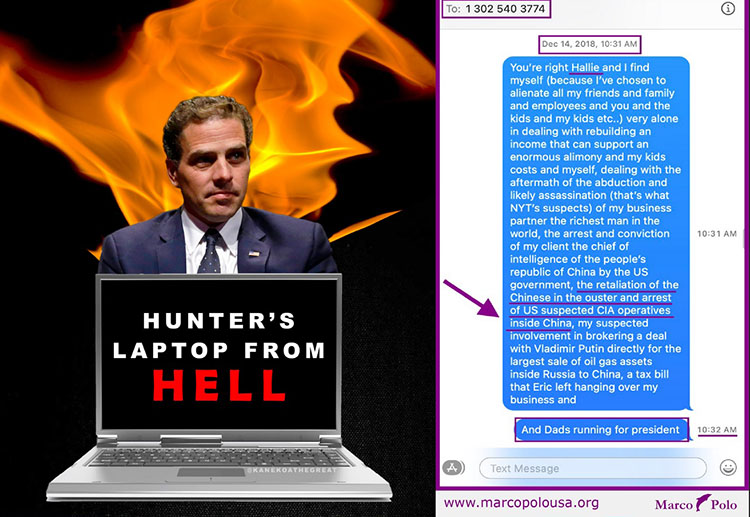 Hunter Biden texted brother’s widow about ‘my client the chief of intelligence’ of China added by Editor Two on April 1, 2022
View all posts by Editor Two →