UNITED NATIONS — The European Union, the concert of 27 countries ranging from the Bay of Biscay to the Baltics and the Balkans has been awarded the Nobel Peace Prize in Oslo, Norway.

Some may smile, others may smirk, and many, when they think about it for a second time, may say “Well done.” Here’s why.

Beyond the obvious symbolism and New York’s iconic Empire State Building lit in the Blue and Yellow European colors to celebrate, the prize was awarded for the “successful struggle for peace and reconciliation and for democracy and human rights.”

When I first heard the news I was perplexed, as were many observers. Only then did I realize that the Nobel Committee prize was not focusing on the evolving Euro currency and debt crisis, but signaling a bold affirmation of the Big Picture; European unity in peace and freedom.The Prize was awarded for Peace, not EU Economics. 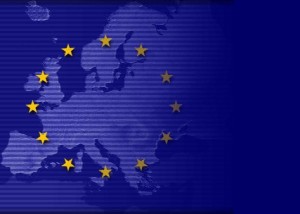 Unquestionably the Euro currency crisis and the enduring economic undertow has tarnished the EU success story. It seems that every other week, EU leaders meet for the “last ditch” effort to save Greece, or valiant plan of Finance Ministers to stave off insolvency in places like Italy and Spain.

The weakened economic foundations may yet weaken the political structures. Thus the Prize stands as a needed encouragement to a generation of both politicians and citizens needing inspiration.
But this celebrates the bigger political project. Think of the historical Why’s of the European project, or dream, if you will and the answer becomes obvious.

Rising from the carnage and chaos of post-WWII Europe, and confronted by a new Soviet military challenge to their sovereignty and liberty, political visionaries such as de Gaspari, Adenauer, Monnet, and Schuman looked to forms of economic integration and loose political community which still appeared like a dream in the 1950’s.

As Herman van Rompuy the European President stated, “So what a bold bet it was, for Europe’s Founders, to say, yes, we can break this endless cycle of violence, we can stop the logic of vengeance, we can build a brighter future, together. What power of the imagination.”

The core building block of Franco/German reconciliation created conditions for the fledgling Coal and Steel Treaty in 1951, later the Common Market, the European Community, which in turn evolved into the European Union.

Honorable Mention for the EU winning the Peace Prize should go to NATO for securing the peace through a defense treaty. NATO, through an especially strong bi-partisan American commitment, provided the security deterrence against the Soviets while the European institutions were able to foster economic growth and political unity.

The EU is not a Union of force but one which countries choose to belong to if only for the political, economic and cultural cohesion which comes from unity. Thus when in 2004 former Soviet satellites such as the Baltic states, Czech Republic, Hungary, Poland and many others choose to join, or should say rejoin Europe, the door to membership was opened in Brussels.

To be sure the Brussels bureaucracy is bloated and often overbearing, prompting many states to complain and differ. Britain who always held a strong Euro skeptic strain, now faces political momentum towards a referendum as whether to stay in or quit the EU.

Charles Grant of the London-based Centre for European Reform told the BBC, “The EU merits the peace prize. It’s role in history is unique and positive, and much more important than the inability of the current bunch of leaders to resolve the Eurozone’s travails.”

Prof. Ulrike Guerot of the European Council on Foreign Relations opined to the BBC, “It reminds us what we forgot during the discussion on the Eurozone crisis; that this was a peace project and a political project…More than sixty years later, we are still struggling with this project, but do not forget that there has not been sixty years of peace in Europe since 1410.”

Despite its current economic doldrums, the European Union states remain global political players. The EU states are among the world’s largest donors of Overseas Development Assistance (ODA) from Africa to the Pacific. But perhaps the biggest success story is close to home in capitals from Paris to Prague and Budapest to Berlin. Europe remains united, free and at peace. A prize worth celebrating.

Europe gets the prize: Sixty years of peace, if not prosperity added by Editor One on December 13, 2012
View all posts by Editor One →