Disaster: At one year mark, Biden appears to question legitimacy of U.S. elections

One year after being installed in the White House, Joe Biden on Wednesday seemingly cast doubt on whether the 2022 midterm elections will be legitimate.

Asked if he believes the 2022 midterms will be fair, Biden responded: “Well, it all depends on whether or not we’re able to make the case to the American people that some of this is being set up to try to alter the outcome of the election.” 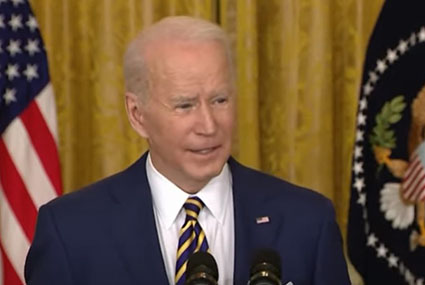 Most political analysts believe Democrats will lose control of Congress in this November’s vote.

“President Biden admitted yesterday, in his own very different way, that the 2020 election may very well have been a fraud, which I know it was. I’m sure his representatives, who work so hard to make it look legit, are not happy.”

Top Republicans said they were startled over Biden’s “irresponsible” comments.

“As you know, the Democrats have been highly critical of those Republicans who refused to accept the results of the last election and use the word ‘rigged’ to say that elections weren’t fair. They’re using the exact same language and casting doubt on elections,” Portman said. “It’s irresponsible.”

“Lets be clear: @potus was not casting doubt on the legitimacy of the 2022 election. He was making the opposite point: In 2020, a record number of voters turned out in the face of a pandemic, and election officials made sure they could vote and have those votes counted,” Psaki said. “He was explaining that the results would be illegitimate if states do what the former president asked them to do after the 2020 election: toss out ballots and overturn results after the fact. The Big Lie is putting our democracy at risk. We’re fighting to protect it.”

Biden on Wednesday also repeated his party’s talking point that Republicans are trying to make it more difficult for minorities to vote by supporting election security measures such as requiring voters to show identification. This despite polling data indicating black voters support Voter ID.

“Well, I think if, in fact — no matter how hard they make it for minorities to vote, I think you’re going to see them willing to stand in line and — and defy the attempt to keep them from being able to vote. I think you’re going to see the people who they’re trying to keep from being able to show up, showing up and making the sacrifice that needs to make in order to change the law back to what it should be,” Biden said.

Team Biden and its Democrat cohorts in the Senate on Wednesday suffered another crushing defeat in their effort to federalize elections when Democrat Sens. Kyrsten Sinema and Joe Manchin joined Republicans in voting down a Democrat gambit where the filibuster would be suspended for a one-time vote on voting rights legislation.

The New York Post Editorial Board noted of Biden’s performance on Wednesday:

Even though he spent most of it clearly calling on reporters from a list of “safe” questioners provided by his staff, he stumbled and bumbled and all too often made no sense at all. Plus, he repeated his bizarre “whisper shout” gimmick to emphasize certain points — when what it actually emphasizes is his age.

On that note, he kept walking down memory lane, reminiscing about how “in my day” cable news was like that, the Republican Party was like this, and so on. He’s fighting old wars in his head, or maybe he’s just confused about the modern world.

Yet he couldn’t remember what he said last week, insisting he hadn’t compared opponents of end-running the Senate filibuster rules to pass the nationalize-election-law bill to Bull Connor and Jefferson Davis. Yet minutes later, he warned those same (Democratic!) senators that their supposedly infamous position will stick with them all the rest of their days.

Disaster: At one year mark, Biden appears to question legitimacy of U.S. elections added by Editor Two on January 20, 2022
View all posts by Editor Two →