‘Deep Throat’ and the Deep State: The FBI not only survived Mark Felt’s confession but is flourishing

The 50th anniversary of the Watergate break-in will be on June 17. It was not until 2005, however, that a major story behind the story emerged.

W. Mark Felt, the FBI’s deputy director at the time of the Watergate break-in, admitted to being “Deep Throat” and feeding information to The Washington Post’s Bob Woodward and Carl Bernstein as an act of revenge against Richard Nixon for not appointing him FBI director upon the death of J. Edgar Hoover. 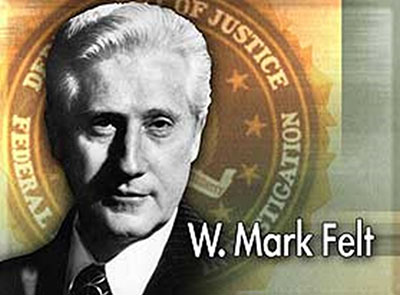 During a 2005 event to mark the 93rd birthday of former President Gerald Ford, (as documented for WorldTribune.com by Trude B. Feldman) then-Vice President Dick Cheney was asked for his thoughts about the disclosure of Felt as “Deep Throat.”

“Well, I was intrigued by it,” Cheney responded. “I think, like everybody else, Watergate had a huge impact on my life. Obviously, as a result of Gerald Ford becoming president of the U.S., my career was enhanced. I might put it in those terms.

“So I am intrigued by the opportunity to learn more about exactly how all of that (Watergate) happened. But I didn’t know Mr. Felt. To my knowledge, I have never met him. And I didn’t have any theories of my own as to who was ´Deep Throat´ So I watched it and read about it with interest, but didn’t dwell on it, shall I say.¨

Cheney was also asked that, had he been Chief of Staff then, and aware of Mark Felt´s role as “Deep Throat”, would he have sought proceedings to remove and prosecute him?

¨Probably not,” Cheney replied. “We made some mistakes, but we never made that one.”

Cheney’s blasé reaction to Felt’s stunning confession, many observers say, is indicative of why the FBI was able to not only survive but to flourish in D.C.’s Deep State.

Watergate was a watershed event in U.S. politics and media. It propelled the Washington Post into undisputed market dominance in the nation’s capital ahead of the Washington Star (which died in 1981, making way for the Washington Times). And it led to the election of leftist Sunday School teacher and former Georgia Gov. Jimmy Carter who promised to restore honesty in government but who was also credited for helping the Soviet Union nearly win the Cold War.

Related: Who is Peter Navarro and why did DOJ target him but not Mike Pence and Mark Meadows? June 5, 2022

Investigative journalist Mark Hyman is the author of “Washington Babylon: From George Washington to Donald Trump, Scandals That Rocked the Nation”. The following is adapted from his book with an eye toward the 50th anniversary of the June 1972 break-in at Democratic Party headquarters in the Watergate complex:

One of the great mysteries of Watergate was the identity of Deep Throat, the nickname given to a key source who fed information to Washington Post reporters Bob Woodward and Carl Bernstein. Woodward and Bernstein reported much of the criminal activities involving Nixon and key staff.

When it became apparent that Richard Nixon would be impeached by the House and almost certainly be convicted by the Senate, he resigned from the presidency. Nixon tendered his resignation on August 8, 1974. One month later, in a national address from the Oval Office, President Gerald Ford declared, “Our long national nightmare is over,” and issued Nixon a presidential pardon.

For years, it was presumed that Deep Throat was an individual acting in the best interest of the nation as he spoon-fed Woodward and Bernstein critical information. In 2005, W. Mark Felt, a former Deputy Director of the FBI, revealed that he was Deep Throat. But rather than acting for altruistic reasons when he passed information to the Washington Post reporters, Felt was a bitter man who was seeking revenge against Nixon and the man who got the job he desperately wanted.

Felt was angry that Nixon passed him over as Director of the FBI when J. Edgar Hoover passed away in May 1972. Instead, Nixon picked an outsider, L. Patrick Gray, as the next director.

Years later it was learned that Felt was the key figure ordering the FBI to violate civil rights and constitutional protections by engaging in illegal activities to pursue various groups and organizations at odds with US policies. Felt and an FBI assistant were convicted in 1980 of violating the civil rights of dozens of people. In retrospect, the most ironic moment was the courtroom appearance of Richard Nixon, who testified as a defense witness for Felt.

Richard Nixon came out of seclusion to testify as a defense witness to possibly save Mark Felt from being convicted of several felonies. Unbeknownst to Nixon, it was Felt who had ratted him out to Woodward and Bernstein. A bigger, self-respecting man would have never allowed Nixon to serve as a defense witness knowing he may have singlehandedly brought down Nixon. Apparently, Mark Felt had no reservations using the man he wanted to destroy.

Felt was convicted, and President Ronald Reagan pardoned Felt to spare him from being incarcerated.

‘Deep Throat’ and the Deep State: The FBI not only survived Mark Felt’s confession but is flourishing added by Editor Two on June 6, 2022
View all posts by Editor Two →