Who is Peter Navarro and why did DOJ target him but not Mike Pence and Mark Meadows?

The Department of Justice and the partisan Jan. 6 Committee are coming down hard on Peter Navarro. The question is, why is the relatively low-profile trade adviser in the Trump White House being targeted in such public-enemy-number-one style?

The answer, observers say, is that Navarro remained a staunch ally of President Donald Trump for every second of his administration. That is enough to send Democrats and RINOs in The Swamp into a feeding frenzy.

In a Telegram post, Garrett Ziegler, who was an aide to Navarro in Trump’s White House, said he and Navarro were all but alone among White House staffers who fought for Trump to the very end. He detailed how Navarro documented 2020 election fraud in a December 2020 report and made all the right enemies in terms of taking on those he considered hostile forces against the Trump administration, including most of official Washington, Fauci, China, etc.

China is an important part of the story as Navarro was integral to Trump crackdown on China’s rarely-discussed grip on Washington’s sprawling policy industry. His full title was Director of Trade and Manufacturing Policy, and the national Defense Production Act policy coordinator

“Peter Navarro is a legend in American political economy. I consider him to be a high-energy, 21st century Hamilton. He understands the American System better than Henry Clay himself. … He worked every single day of the week (literally) and you all would be proud to see how much he did, against globalist forces within the Admin, to advance your interests,” Ziegler wrote.

On Friday, the FBI pulled Navarro off a plane at Nashville airport. He was handcuffed and dragged into custody “for no reason,” the New York Post editorial board noted, adding the Navarro “said he would have voluntarily surrendered over his contempt of Congress charges relating to his refusal to work with the Jan. 6 Committee and noted he was given no warning that he was going to be arrested. Defendants in similar situations are nearly always given the opportunity to surrender.”

Navarro has no history of violence and is not a flight risk. The judge in his case released him on his own recognizance.

“This is pure, ugly politics,” the Post editorial said. “It’s a naked effort to drum up publicity, outrage and media interest for next week’s hearings over just how involved the ex-prez and various other officials were” with the events of Jan. 6.

The Post added: “Making a show of force against an aging trade expert as though he were a fleeing drug kingpin doesn’t serve justice. It only serves the nakedly partisan aims of the Democrats who control Congress and the Justice Department.”

Meanwhile, on the same day Navarro was indicted, the DOJ announced that it would not indict former Trump chief of staff Mark Meadows or Dan Scavino, Trump’s deputy chief of staff, for contempt of Congress.

Matthew M. Graves, the U.S. attorney for the District of Columbia, informed Douglas Letter, House general counsel, on Friday that Meadows and Scavino would not be charged, according to a letter obtained by the New York Times.

“Based on the individual facts and circumstances of their alleged contempt, my office will not be initiating prosecutions for criminal contempt as requested in the referral against Messrs. Meadows and Scavino,” the letter states.

One count of contempt of Congress is punishable by a maximum of one year in jail, as well as a fine of up to $100,000, according to the DOJ.

Axios, meanwhile, reported that multiple members of Vice President Mike Pence’s staff who were at the White House on Jan. 6 have been “integral” in helping the partisan Jan. 6 Committee. “From the two I was in, you could see how much information they already had,” former Pence staffer Alyssa Farah told Axios of her meetings with the committee last year.

A deeper dive into why the DOJ targeted Navarro shows that the Trump trade adviser touched several third rails that the Left has declared off limits, including his detailed report on 2020 election fraud and his criticism of China, Bill Gates, and Anthony Fauci.

Navarro “wrote a definitive report on the 2020 election fraud on his own time as it was not part of his official duties,” Ziegler said, adding that The Navarro Report, “which I helped write, documented the Low Rent fraud in great detail, with hundreds of footnotes and affidavits. (I still think I’m the only person in the USA with all of the unredacted affidavits ha.) But..the High Rent (electronic) fraud is a different matter, and the truth is still coming out.”

Ziegler added that “it will probably be in his book, but Peter Navarro and I met with Bill Gates for about 30 minutes in October 2019. It was a shitshow. All Peter did was drill him on why Microsoft develops custom software for the PLA. All Bill did was squirm and do his Pterodactyl gesticulations.”

In an October 2021 interview with the Seattle-based Jason Rantz Show, Navarro called Fauci “evil” for the role he played in gain-of-function research prior to the outbreak of the COVID-19 pandemic.

Rantz asked Navarro if he thought Trump made a mistake in not firing Fauci and allowing him to get the media attention he did. Navarro said he advised Trump on at least two occasions to fire Fauci but doesn’t blame the president for not taking his advice.

“But it was a mistake for the republic because that man is evil. Make no mistake about this. He is evil because he was at the American bureaucracy that used taxpayer dollars” to pursue gain-of-function experiments, Navarro said.

On China, Ziegler pointed to a chart by Navarro which ‘we called a Navarro Special. It’s all true!” (see below). 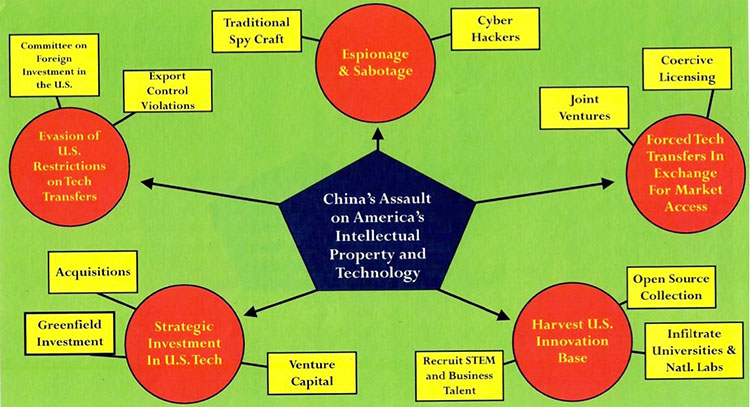 Garrett Ziegler, Mark Meadows, Mike Pence, President Donald Trump, Who is Peter Navarro and why did DOJ target him but not Mike Pence and Mark Meadows?, WorldTribune.com

Who is Peter Navarro and why did DOJ target him but not Mike Pence and Mark Meadows? added by Editor Two on June 5, 2022
View all posts by Editor Two →