Daily Mail: Russia did not lie about Biden link to Ukraine biolabs

Russia’s claim that Hunter Biden’s investment fund was involved in raising funds for biolab projects in Ukraine was accurate, according to e-mails reported on by London’s Daily Mail Friday.

The commander of the Russian Nuclear, Biological and Chemical Protection Forces, claimed there was a “scheme of interaction between US government agencies and Ukrainian biological objects” and cited the “financing of such activities by structures close to the current US leadership, in particular the investment fund Rosemont Seneca, which is headed by Hunter Biden,” according to the report. 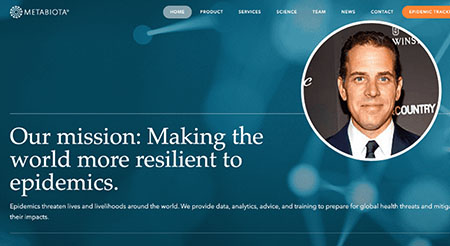 Intelligence analysts promptly dismissed the allegations as propaganda to justify President Vladimir Putin’s invasion of Ukraine and divide public opinion in the U.S.

“But emails from Hunter’s abandoned laptop show he helped secure millions of dollars of funding for Metabiota, a Department of Defense contractor specializing in research on pandemic-causing diseases that could be used as bioweapons,” the Daily Mail reported.

“Metabiota … Ukraine … Plandemics … It’s all in the Biden laptop, which is, according to Marco Polo, a new Rosetta Stone of corruption,” noted Garrett Ziegler in a Telegram post last month. Ziegeler, a former Trump White House official heads the Marco Polo research group.

An analysis by Federalist on March 28 noted that Russia’s access to the laptop made the device and its owner a national security threat.

The timing of events last week suggests Russia has access to the same emails as The Daily Mail or that Vladimir Putin’s agents might well have obtained access to Hunter Biden’s first laptop — the one the president’s son believed Russians had stolen in 2018. In either case, the Biden family corruption documented on the laptops has gone from a potential national security risk to a real one — and in the midst of a war launched by Russia on a country bordering North Atlantic Treaty Organization allies.

In June 2021, the San Francisco-based Metabiota was honored by the globalist World Economic Forum (WEF) as one of its “Technology Pioneers” amid the Covid pandemic that WEF founder Klaus Schwab termed phase one of his “Great Reset.”

The pandemic “acclimatized the world to lockdowns, normalized the acceptance of experimental medications, precipitated the greatest transfer of wealth to corporations by decimating SMEs (Small and Medium Size Enterprises) and adjusted the muscle memory of workforce operations in preparation for a cybernetic future,” said a March 9 analysis in Winter Oak.

Susan Nesbitt, Head of the Global Innovators Community at the WEF said of Metabiota: “Metabiota and its fellow pioneers are developing technologies that can help society solve some of its most pressing issues.”

Metabiota’s Nita Madhav said: “It’s a great honor to be acknowledged as a pioneer by the World Economic Forum. This provides validation that our technology is among the most unique in the world to build health systems, societies, and economies that are more resilient to infectious diseases. Our technology can help risk mitigation efforts as infectious diseases continue to pose an increasing global threat. We look forward to contributing to the Forum dialogues on this challenge.”

The WEF says its Technology Pioneers are “early to growth-stage companies from around the world that are involved in the use of new technologies and innovation that are poised to have a significant impact on business and society.”

“Although Metabiota is ostensibly a medical data company, its vice president emailed Hunter in 2014 describing how they could ‘assert Ukraine’s cultural and economic independence from Russia’ – an unusual goal for a biotech firm,” the Daily Mail noted.

“Emails and defense contract data reviewed by DailyMail.com suggest that Hunter Biden had a prominent role in making sure Metabiota was able to conduct its pathogen research just a few hundred miles from the border with Russia. The project turned into a national security liability for Ukraine when Russian forces invaded the country last month.”

“Metabiota has worked in Ukraine for Black & Veatch, a U.S. defense contractor with deep ties to military intelligence agencies, which built secure labs in Ukraine that analyzed killer diseases and bioweapons,” according to the report.

Metabiota also has close ties to China’s Wuhan Institute of Virology (WIV), now considered the most likely source of the Covid outbreak.

Researchers from the Wuhan institute, Metabiota, and EcoHealth Alliance published a study together in 2014 on infectious diseases from bats in China, which notes that tests were performed at the WIV.

Shi Zhengli, the WIV Director of the Center for Emerging Infectious Diseases who became dubbed the “bat lady” for her central role in bat coronavirus research at the lab, was a contributor to the paper.

Metabiota has been an official partner of EcoHealth Alliance since 2014, according to its website.

Daily Mail: Russia did not lie about Biden link to Ukraine biolabs added by Editor Two on March 28, 2022
View all posts by Editor Two →