America is afflicted by a serious sickness of soul as well as body.

In December, WorldTribune related the brazenly open boasting of a Wisconsin big dairy farmer who sought to pass off his avidity to hire illegal aliens for cheap labor as a “one happy family” workplace love story:

While it’s become more difficult to get Americans to accept difficult, menial jobs without great pay, immigrant labor is much easier to find. There is some truth to the cliché of “jobs most Americans just won’t do.”

“If we have some kind of decent immigration policy, it would solve the labor shortage we have right now. It’s as clear as can be. But everyone is so rampant about immigration, it probably won’t happen. We would all benefit and things would be better,” [John] Rosenow said. 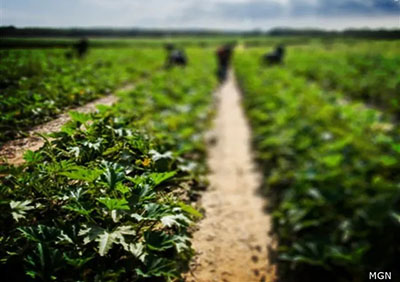 In fact, as anyone with one whit of common sense already knows, not everybody benefits from cheap and easily exploited labor. Real human beings suffer tremendously.

A Jan. 5 article in The Atlanta Journal-Constitution sheds considerably better lighting on the grim reality of how Rosenow’s mindset really plays out:

Many victims of a large-scale South Georgia labor trafficking ring regained their freedom on the same day: Nov. 17, 2021. On that Wednesday, law enforcement rescued 26 migrant farmworkers from the living quarters they were held in and took them to a victims’ center set up in Douglas, a town of 12,000 in rural Coffee County….

For victims, the aftermath of a trafficking bust is a delicate time. They must rely on immigration authorities or nonprofit advocacy groups to ensure they keep legal status in this country and have the resources they need to survive. But they also need help coping with their trauma.

“What often happens is that they’re going to take the next job, which could be as abusive as the one that they just escaped, where they are going to become victims again of wage theft and abuse,” said Victoria Mesa-Estrada, a senior staff attorney at the Southern Poverty Law Center. “And the cycle just keeps going, because this is a population that is very vulnerable to abuse.”

From a Dec. 3 Journal-Constitution article on the original busting of the ring:

Victims include over one hundred laborers smuggled from Mexico and Central America into “brutal” and “inhumane” working conditions. Under the threat of gun violence, some were allegedly forced to dig for onions with their bare hands, earning only 20 cents for each bucket harvested. At least two people died on the job. Another was allegedly repeatedly raped.

When not out in the fields, workers were detained in work camps surrounded by electric fencing, or held in cramped living quarters, including dirty trailers with raw sewage leaks. There was little to no access to food or safe drinking water.

As an aside, you’ve got to love how the thoroughly discredited Southern Poverty Law Center, which keenly supports the illegal immigration invasion that makes this abuse possible, is acting like some kind of advocate against this evil. That takes gall.

Now back to the glazed spin of our Wisconsin cheap foreign labor employer:

“Twenty-two or 23 years ago, we were in the same situation the whole country is in now — we couldn’t find people to work. So we went to Mexico,” Rosenow said. Of the prospective employees he found south of the border, he said: “Great people that want to work.”

And here is the Georgia reality:

In Douglas, the initial priority for case workers was to assess victims’ physical health. Rescued farmworkers arrived at the victims’ center with cuts, bruises and infections caused by work conditions that prosecutors would go on to describe as akin to “modern-day slavery” in an indictment unsealed later in November. The victims were migrants from Latin America who came to Georgia with legal visas before being allegedly abused by their employers.

Now, about half of the 20 employees at Rosenholm Dairy are Mexico-born. Whenever one quits — often to move back home after having earned more money in Wisconsin than they could have ever made at home — they are almost always immediately replaced by a relative of a current employee seeking a better life and willing to travel 1,400 miles to Wisconsin to pursue it.

“Every time an American quit, I would hire a Mexican. (Hiring) went from one of my biggest headaches to not a headache at all,” he said.

Workers were “lucky to get a meal a day,” said Alia El-Sawi, an Atlanta-based victim assistance specialist at Homeland Security Investigations (HSI), the agency within the Department of Homeland Security that led the years-long investigation into the South Georgia trafficking ring, and which also took the lead in setting up the Douglas facility. “A lot of people wouldn’t have their pets living that way.”

This is far from a one-off giving wonderful folks like our Wisconsin farmer a bad name. It is systemic, which of course is to be expected when people are bringing in desperate, impoverished people from a Third World country just so they can put them to work at the lowest possible pay:

Laura Germino is a co-founder of the Coalition of Immokalee Workers. The Florida-based nonprofit’s Anti-Slavery Program has assisted in the prosecution of several farm slavery operations across the southeastern U.S. since the 1990s, helping liberate over 1,200 workers.

Farmworkers “go from suffering a loss of control when they’re in one of these situations to, once freed, they regain control, but it doesn’t happen just like that,” she said. “It’s not instant because of what people have been through.”

Germino remembers the remarks a man caught in an abusive job in Florida made following his release: “He said it’s like coming out of the darkness into the light. He said it’s like being reborn.”

Maddeningly, the big-box Atlanta Journal Constitution takeaway from this human tragedy is that the best thing we can do for these poor victims is to… put them right back in the same exploitative labor situation that caused their pain in the first place.

Experts say that one of the immediate objectives of farmworkers freed from forced labor operations is to waste no time getting back to work. That’s because they are cash-strapped, with wage theft being a common crime against trafficking victims, including, allegedly, in the South Georgia “modern-day slavery” case.

“One of the first things workers desperately want is a job when they get out, because they have not been earning the money that they wanted to earn to support their families,” Germino said.

This is the ultimate in insanity. Perpetuate the very system that abuses these people in the name of helping these people get over their abuse.

It’s like making a rape victim return alone to the dark and dangerous street where she had been assaulted right after she is released from the hospital.

In short, it is another in the many bald-faced monumental lies being told in American public life today. But this is necessary to prop up the equally enormous lie that America needs cheap foreign labor and that it is a good thing for all involved in the grand scheme of things.

How many victims will there have to be before the “experts” admit that maybe it’s the exploitative labor dynamic itself that is the real problem?