Coca-Cola is as American as Chinese Communist repression

Last week we fleshed out the reasons why Delta Airlines joined the howling outrage mob on the Left over Georgia’s new election integrity laws after initially trumpeting its role in helping craft the legislation.

Meanwhile, Atlanta-based Coca-Cola lost no time in teaming up with Delta – and Major League Baseball – in lining up for the big-brand corporate assault on a U.S. state’s sovereignty.

A key giveaway with Delta CEO Ed Bastian was his Council on Foreign Relations membership. This marked the airline exec as being part of an agenda. He is in the globalist club. Coca-Cola’s loyalty to that same worldview is beyond reproach. Let us count just a few of the ways. 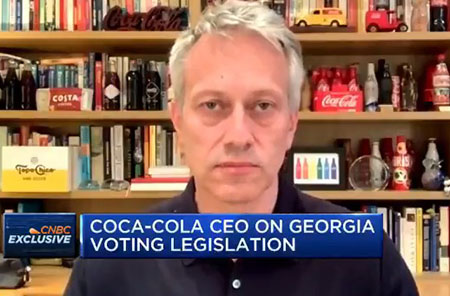 In 2019, The Coca-Cola Foundation donated $250,000 to the Bill, Hillary & Chelsea Clinton Foundation. Keep in mind that by this time many corporations had stopped giving bundles of cash to this suspected pay-for-play organization, seeing that the Clinton family is now firmly out of political power. What can Coke possibly be getting from the Clinton Foundation at this late date?

As a side note, the 2019 Coca-Foundation grants lists also includes $50,000 for the Transgender Law Center. “Through our organizing and movement-building programs, we assist, inform, and empower thousands of individual community members a year and build towards a long-term, national, trans-led movement for liberation,” the bizarre radical group proclaims on its website.

Coca-Cola CEO James Quincey sits on the Board of Directors of Big Pharma Goliath Pfizer. He is also a Board member at the U.S.-China Business Council, an organization dedicated to helping American companies operate in communist China.

“We have a very clear view that we think globalization in trade has certainly helped provide economic growth that has allowed societies to progress. So we are in favor of well-organized trade….

“We’ve always had a great relationship operating in China. One of our partners is a state company… I have to say we’ve always been able to find our way to expansion and the right opportunities in China…. Focusing on how to get the economy to grow and what would drive more growth will be the biggest beneficial outcome for the entire economy.”

Coca-Cola is also a member of the American Chamber of Commerce in China’s “Chairman’s Circle.” The Circle boasts that membership has its advantages:

A December Bloomberg article explains how bloody this “government access” can be:

The Chinese government was represented at the annual American Chamber of Commerce event Thursday in Beijing by Wang Chen, a member of the Communist Party’s Politburo. Wang is also vice chairman of the National People’s Congress and among the 14 officials sanctioned by the U.S. on Monday over the body’s role in constraining freedoms in Hong Kong.

Chinese Foreign Ministry spokeswoman Hua Chunying said Wang appeared at AmCham’s invitation and praised the group’s commitment to cooperation between the two countries. “This just shows that the so-called sanctions by the U.S. are unpopular and will not be supported by all sectors of the U.S.,” Hua told a regular news briefing Friday in Beijing.

Unbelievably, this canoodling with oppressive communism is not an occasional hazard for AmChamChina. According to its own people, it is a staple feature. As we wrote of the group in March 2020:

Another board member is Fernando Vallina, CEO of ExxonMobilChina. He is profiled in the most recent issue of the organization’s “AmChamChina Quarterly” magazine posted on the group’s website. In the publication, Vallina positively gushes that a tyrannical communist regime makes for ideal working conditions for a globalist capitalist company in today’s business world.

“One of the things that is great about doing business in China is that, unlike many other places, the government priorities are very clearly spelled out,” Vallina says in the piece. “You have a five-year plan that gets translated into industry plans. All you have to do is read what the priorities are for China.”

“I’ve never seen my role as looking for China to change and do things the way we do in other parts of the world,” Vallina continued. “I’ve always seen my job as trying to find the fit between what China wants, whatever their model is, and what my company can offer – finding those areas of commonality and finding investment opportunities in it.”

A look at Coca-Cola’s Board of Directors shows more troubling global elitist ties. Blackstone Exec Marc Bolland is a board member. His Coke bio reads:

Mr. Bolland has been a Director of The Coca-Cola Company since 2015. Mr. Bolland is Head of European Portfolio Operations of The Blackstone Group Inc., one of the world’s leading investment firms, and has held this position since September 2016.

Far more disturbing is uber-credentialed globalist Helene D. Gayle, formerly of the Bill & Melinda Gates Foundation. Her bio at U2 rock star Bono’s ONE Foundation, an organization wholly incubated by and attached to Bill Gates where she also sits as a Board member, states:

Dr. Gayle spent 20 years with the Centers for Disease Control, working primarily on HIV/AIDS. She also worked at the Bill & Melinda Gates Foundation, directing programs on HIV/AIDS and other global health issues.

Dr. Gayle serves on public company and non-profit boards including The Coca-Cola Company, Colgate-Palmolive Company, the Rockefeller Foundation, Brookings Institution, the Center for Strategic and International Studies, New America and the ONE Campaign. She is a member of the Council on Foreign Relations, the American Public Health Association, the National Academy of Medicine, the National Medical Association and the American Academy of Pediatrics.

CCT makes a large number of grants annually to organizations which push for more lenient abortion regulation in the United States. In 2018, the organization made a $10,447 grant to the Center for Reproductive Rights, a large organization which advocates for legislation on a state level which would legalize most abortions including late-term cases. The organization also made a $172,000 grant to the Planned Parenthood Federation of America (PPFA), an organization which carries out and advocates for abortions in the United States, and $174,402 to Planned Parenthood of Illinois, the Illinois state-level branch of PPFA.

In 2019, Gayle co-wrote an article in the New England Journal of Medicine calling for the abortion pill RU-486 to be made widely available to American women.

When Gayle left the Gates Foundation in 2005 to head up CARE, an organization that is one of the biggest pushers of Third World migration into the West, the Gates cabal said this about her:

This is who is on Coke’s Board of Directors. A leading force in crafting Bill Gates’s population control endeavors. Coke Is It!

Too many Americans still don’t understand that the latest explosion of Corporate Wokeness isn’t merely the result of some injection of leftism in executive offices. This truly is what these companies are about, what they stand for. They are globalist entities that do not care one whit for the nation they reside in. To them, the United States is just one franchise in a larger global shopping mall.

And, what’s worse, America is seen as an old anchor tenant – a fading Sears or JC Penney — while China is the hip, cool Sharper Image of 30-odd years ago.